We have long embraced our pets. I don't think I have ever had a better friendship with a non-human than I do with my rescue mutt, Mooshi, the wonder dog. Don't know where I would have been during my darkest moments during my illness with COVID without Mooshi. For about a month last spring, when I was really wondering just what the heck my body was doing to me, that dog would put her back to the side of my leg while I lay in bed for most of the day, and face the door of my bedroom. She knew I was sick, and for a month straight, that dog guarded me. True story. I've had dogs before. Not one who understood that I was sick, and sought in her own dog way to protect me. Color me impressed.

Another thing. I pray every morning. Outside. Mooshi's already been fed, so it's not about food. If for some reason I forget to go outside to pray, she reminds me. I don't think she actually prays with me, I am not that crazy... but I do think that she knows we do something important together every day, and doing it every day is important to her. Hence, humans and their pets. The need to welcome them into our families and take care of them as they take care of us, at least mentally. Hence, it makes sense that an e-commerce operation catering to the needs of pet-owners would find success.

Chewy, Inc (CHWY) reported the firm's fourth quarter results on Wednesday morning. For the quarter, Chewy posted GAAP EPS of $0.05, which was a surprise profit, beating expectations (of $-0.10) quite handily. This was the first truly profitable reporting period since the firm went public two years ago. Revenue generation landed at $2.04 billion, also a beat of the street, and good enough for year over year growth of 51.1%. That kind of growth is above trend, even when isolating pandemic era only results.

There's more to like. Gross margin ended the quarter at 27.1%, up 300 basis points over the same period last year, and well above industry consensus of 25.1%. Net income amounted to $21 million, even including the share-based compensation expense of $24 million. Net margin of 1% proved to be a y/y improvement of 550 basis points. In addition, adjusted EBITDA swung positive, big time... to $60.8 million up $66.6 million from a year ago.

Will the customers using the service now stick with Chewy going forward? I think they will. Or at least enough of them will. Autoship sales were $1.39 billion, +46%, and now represent 68.2% of total net sales. That's the golden ring in 2021.... subscriptions... recurring revenue. You let the dog food run down to nothing, you either have to run out and get more, let the dog eat whatever you're eating that night, or rush an order either through Chewy or Amazon (AMZN) , but are you going to use Amazon for pet care needs other than replenishing household pet food inventory? Chewy does make it easy. I walk all over my neighborhood every day. I see Amazon boxes, I see boxes from the USPS. I also see boxes marked "Chewy" on a lot of front porches, especially homes where I know everybody works. Not from home, or not normally from home anyway.

Chewy guides current (Q1) quarter sales to $2.11 billion to $2.13 billion versus a street consensus of $2.07 billion. The firm also sees full year sales at $8.85 billion to $$8.95 billion, consensus being the low end of that range. I see that at least three five star (rated by TipRanks) analysts have opined on CHWY this morning... Brian Fitzgerald at Wells Fargo, Seth Basham at Wedbush, and Nat Schindler at Bank of America. All three have "buy" ratings on the name, with target prices of $120, $100, and $133, respectively, coming to an average for the three of $117.67. Schindler noted that pet profile creations at Chewy were up 35% for 2020 over 2019, and that newer profiles are showing higher repeat order rates, as well as higher average value per order. He also notes pharmacy operations topped $500 million in revenue for the year as well, and is a higher margin business than are food, or toys. 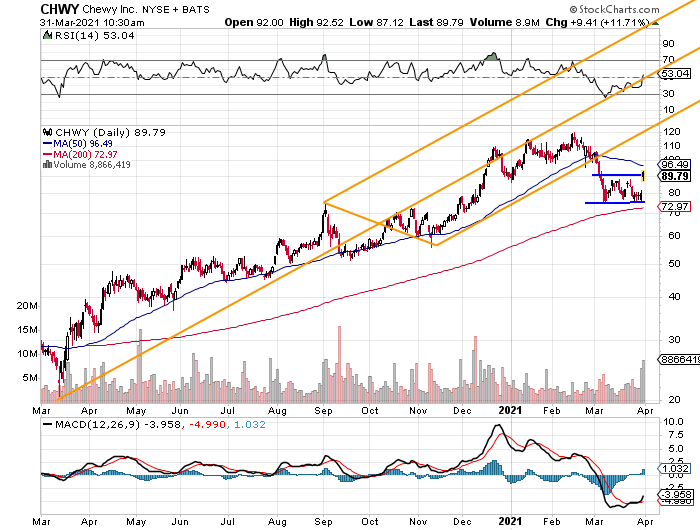 Readers will see that in early March, this stock failed both the lower trend line of the Pitchfork model that had been in place, as well as its own 50 day SMA. After that a very tight basing period exists that ran almost a month prior to breaking out this morning. The negative there, as relative strength pokes its head above 50m and the daily MACD suddenly turns for the better, would be gao noe created between $82 and $87 that at some point, I would think will fill.

For that reason I am not likely to chase CHWY on this day. I think I would rather wait for a chance to pay $82, which is why they created puts and rock and roll, but mostly puts. Going out two weeks on expiration and getting paid more than $2 for April 16th $82 puts makes some sense to me. So does getting paid more than $4 to write May 21st $80 puts. If I wanted to get some downside equity exposure to CHWY, which I am not sure just yet that I will do, this is how I would go about it. Sarge out.

Get an email alert each time I write an article for Real Money. Click the "+Follow" next to my byline to this article.
TAGS: Earnings | Investing | Stocks | Technical Analysis | Trading | Pets | E-Commerce