Faithful readers know that I was thrilled, as a shareholder, when Nelson Peltz and Trian Partners showed an interest and invested in The Walt Disney Co (DIS) . Got that same kind of "warm and fuzzy" feeling when I saw the Wall Street Journal's article concerning Salesforce (CRM) last night. Though I had not suffered through the decline in Salesforce the way I had (on and off) with Disney, the result was the same. Shareholders generally love when an activist investor targets an underperforming company in whose stock they hold a long position.

The article in the Journal states that Elliott Management, one of the most prolific of activist firms, had made a multi-billion dollar investment in Salesforce. The article could not immediately cite any details regarding any specific campaign being launched by Elliott such as board membership or operational changes, but Elliot is known for their "no nonsense" approach and their focus upon the bottom line when involved. As a large firm, known for operating with a "social conscience", one would think that a culture clash could potentially be in the offing.

The Lay of the Land

Obviously, things have been going less than swimmingly for Salesforce of late. From the high of November to the low of late December 2022, the stock had lost 59.5% of its value. The firm had turned in recent years toward the purchase of growth as a means of accelerating what growth could have been attained organically. Three years ago, the firm acquired Mulesoft for more than $46B. Two years ago, Salesforce acquired Tableau for approximately $15B. Last October, the firm swallowed Slack in a deal that ran more than $27B.

There is more to consider. Leadership around Marc Benioff has been fleeing the firm. When I wrote to you about this stock about two months ago, co-CEO Bret Taylor had announced his intention to leave Salesforce, as did the former CEO and co-founder of Slack, Stewart Butterfield.

In addition, Salesforce had announced a restructuring plan that included the layoff of roughly 10% of the firm, or a rough 7,300 individuals. Benioff, in a note to employees, had acknowledged that clientele were being more careful in making their spending plans and that the firm had hired too many people during the pandemic.

In early January, I mentioned that I trusted Marc Benioff as someone that I would not bet against, but was it time yet to bet on Marc? I asked... Does this restructuring signal that the time to reinitiate CRM is upon us? I was not yet convinced. I mentioned that I saw the 50 day SMA as the line where perhaps some portfolio managers would increase exposure ahead of earnings.

Noting that three times from October into November, CRM had pierced both its 21 day EMA and 50 day SMA only to quickly surrender those lines. My thought was that I needed to see a take and hold of that 50 day line before I could believe enough to purchase equity and then set my sights on the 200 day line. 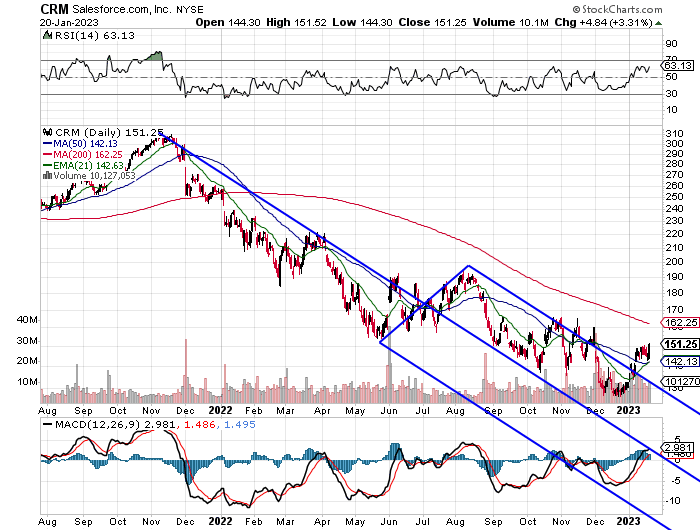 This is an extension of the same chart I showed you that day. The stock has not only broken out of our Pitchfork model, but has retaken that 50 day line and then used it as support. That's exactly what I was looking for. Holding that line through last week's midweek negativity was enough for me.

The fundamentals are better than you think. It's true that for two quarters in a row, Salesforce has produced significantly less operating cash flow than it had prior. Even so, the firm has continued to produce positive free cash flow. Maybe just by a hair, but positive cash flow nonetheless.

The balance sheet remains in decent enough shape as well. As of October, the firm had a net cash position of $11.918B and current assets of $19.209B. This measured up against current liabilities of $18.227B for a current ratio of 1.05. While that ratio barely looks passable, it is indeed healthier than it looks. Of those current liabilities, $11.193B is in unearned revenue, which is not truly a financial liability but actually more a liability of labor due.

The firm is expected to absorb a GAAP net loss for the period as the restructuring will lead to roughly $1.2B to $1.4B in charges, of which between $800M and $1B will be recorded during the quarter to be reported. The year ago comps would be adjusted EPS of $0.84 on revenue of $7.33B. That's 9% sales growth. This will be the fifth consecutive quarter of decelerating year over year revenue growth for Salesforce.

I am not in love. I do find the chart to be constructive. I do love that most of the restructuring charges are being dealt with quickly, and I do love that Elliott Management is sticking their nose, not to mention their wallet in. My target price for now is the 200 day SMA (simple moving average) ($162), but I would not sell prior to gaining some kind of understanding of Elliott's intent.

If I were not long the equity, I would probably consider purchasing $155 February 24th calls for a rough $6.75 and pay for it by selling twice as many $145 February 24th puts for about $3.45 a piece. That wipes clean any expense on premium. The investor either winds up long at $155 or long twice as much at $145 after earnings. Unless of course the shares land both below $155 and above $145 at expiration.