Fragility. It was supposed to go smoother than this. Maybe it still will. The 737-Max aircraft had become once again okay to fly. A special variant of the 737-Max was even approved for Ryanair (RYAOF) , so an order for 75 aircraft could be filled for Europe's largest airline. A change in executive leadership in the U.S. was thought by some to perhaps work toward easing trade tensions with China, the world's second largest and maybe someday soon... largest economy. Perhaps large orders for civilian airliners could ease the trade imbalance. Perhaps. Unless, when it comes to China, both the current executive and his immediate predecessor who on the surface agree to very little, actually do agree.

Plenty to brag about. In late March, Boring announced that the firm had been awarded $1.62 billion to deliver 9 P-8A Poseiden maritime patrol aircraft to the U.S. Navy, and two more to the Royal Australian Navy. The work will be done in the states of Washington and California and is expected to be completed sometime in 2024.

Introducing the latest, most highly upgraded Boeing F-15 Eagle yet, the F-15EX, which will replace the F-15C's still in wide usage. Fourth generation fighters have no stealth capability. Why would the U.S. Air Force place what could amount to a $23 billion order for yesterday's roast beef? Simple. Unless, the U.S. actually takes on a peer adversary, the U.S. usually is able to quickly gain air superiority over the theater of operations. The F-15 is capable of carrying heavier payloads, meaning more armaments than the F-35. So, if you can protect them, they are the right cross to the F-35's constant jabs.

By the way, for those following this story, the first deliveries are being made with engines manufactured by General Electric (GE) , but Raytheon (RTX) is expected to compete with GE over the length of the contract.

About 10 days ago Boeing CEO Dave Calhoun warned that the U.S. probably should keep disputes with China over human rights abuses separate from improving trade conditions between the two nations. Calhoun says this as Boeing is currently in negotiation with China Eastern Airlines (CEA) , for a potentially huge order 737-Max order that European rival Airbus (EADSF) would love to get in between. Key to note here, that from a regulatory perspective, China is among the last key players yet to clear the 737-Max for flight.

Now, this: According to Reuters, on Friday morning, Boeing reports that the firm has asked 16 customers to address a potential production issue pertaining to an electrical power system found in a specific group of 737-Max aircraft before again flying those planes. Customers with specific tail numbers are being informed that they need to check to see if a sufficient ground path exists for a component of the electrical power system. If there is an issue, directions are being provided on how to take corrective action.

Boeing reports on Wednesday, April 28th. A consensus of 17 sell-side analysts is for EPS of $-1.06 on revenue of $15.9 billion. This would compare to $-1.70 a year ago on revenue of $16.9 billion. This would be year over year revenue contraction of about 6%. Boeing has not reported year over year revenue growth since Q4 2018, so this release will likely stretch the firm's losing streak to nine quarters. That said, this will be the smallest contraction since Q1 2019, so improvement. 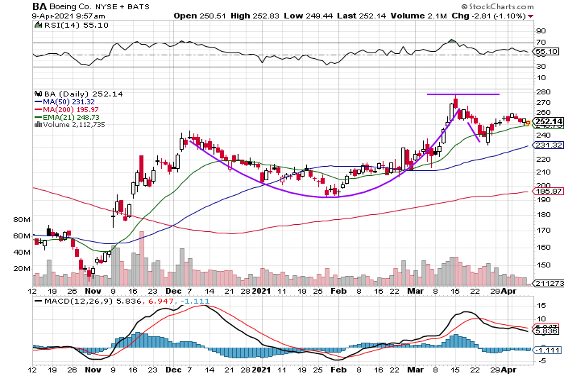 Readers will see the cup (or is it a saucer?) that peaks close to $278 in mid-March. That had been and still might be the pivot. Problem is that the chart develops a handle quite nicely, but fails in very early April prior to even approaching pivot. Now, the shares have to hang on to the 21 day EMA for dear life. They lose the green line, and I think the blue line, the 50 day SMA at $231 becomes the next line of defense.

I am not crazy about Boeing. The new management is light years ahead of the old, but in my amateur opinion, there seems to be a chance that the work is still sloppy. Am I too harsh? I'm not sure. I know that under the old regime, the Air Force had too often to complain about debris left behind by workers in brand new cargo planes. I am going to like Boeing at some point. I played the November bounce. That was easy. This is less so. I do not think I am there yet. I also do not like openly encouraging national leaders to do something not necessarily the right way, in order to benefit business decisions, but perhaps I am just naïve, or from a different era.

This one is still just a trader until we see a decisive move in either direction away from that 21 day SMA. A $250 April 30 straddle would pay more than $19. That is a tempting sale. I do not see buying a straddle as a strategy that works that often. I am more comfortable selling options than buying them. The profit zone for the equity would run all the way from $231 to $269. Definitely risky, but the trader would capture almost three weeks of premium decay in a volatile name.

Get an email alert each time I write an article for Real Money. Click the "+Follow" next to my byline to this article.
TAGS: Investing | Stocks | Technical Analysis | Trading | Aerospace | Airlines | Defense | Earnings Preview