Johnson & Johnson (JNJ) reported the firm's third quarter financial performance on Tuesday morning. JNJ posted adjusted EPS of $2.60, handily beating expectations, but GAAP EPS of $1.37 which missed Wall Street's expectations by a mile. The frim also generated $23.34 billion in revenue, which was good for year over year growth of 10.7%, but fell about $380 million short of what Wall Street was looking for. Much of that falls directly on sales of the firm's COVID-19 vaccine that landed well below expectations. JNJ's adenovirus vaccine delivered $502 million in revenue over the reporting period versus the $762 million that Wall Street had on their minds.

Regionally, the firm delivered $11.96 billion in U.S. sales, up 7.9%, and $11.37 billion in international sales, up an impressive 13.8%. By segment, the largest and fastest growing unit remains Pharmaceuticals. If one is in this name on the long side, pharma is why. The segment contributed sales of $12.99 bilion, up 13.8%. Medical Device sales grew 7% to $6.64 billion, while Consumer Health sales increased 5.3% to $3.7 billion. Unit sales within pharma was driven by Immunology (particularly internationally), inflammatory disease therapeutic Stelara, Remicade, and Infectious Diseases. Growth was driven by Stelara along with Darzalex, and Tremfya. 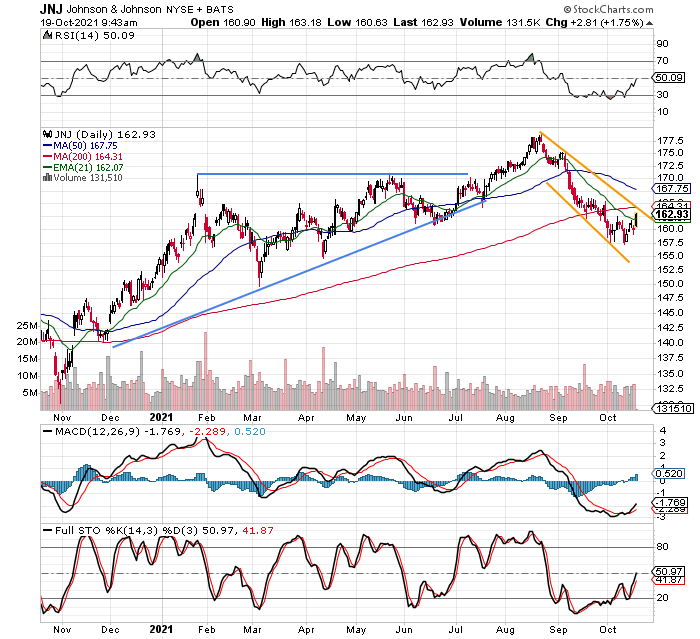 Readers will see the stock breakout of a $173 pivot created by an ascending triangle. However, the breakout fails in late August and a two month series of lower highs coupled with lower lows is created. Tuesday's action is positive in that the shares are trying to retake the 21 day EMA for the first time in six weeks. The daily MACD is coiled for some positive price discovery, but neither the RSI, nor the FSO tell us much more than that a low has been missed.

If one is already long, do today's numbers provoke a sale? Not in my opinion, but do they provoke a purchase? I was thinking that I might grab a few on the dip, if there was a dip. Neither the numbers nor the guidance are so impressive that I would chase this stock on an "up" day. That said, the stock is in solid fiscal shape, trades at just 15 times forward looking earnings, and just four times sales... all while paying shareholders $4.24 (2.65%) per year just to hang around.

I think JNJ is worthy... at the already twice missed low of $157. Twice missed for me anyway. You may have nailed it. I'd rather go out to November 19th and write $157.50 puts for $1.05 or December 17th and write $155 puts for $1.70, then chase the equity. No, the options won't pay you that dividend, but you are being paid to expose yourself to equity risk over time at levels that you (if you agree) have already found to your liking.

Get an email alert each time I write an article for Real Money. Click the "+Follow" next to my byline to this article.
TAGS: Earnings | Investing | Markets | Options | Stocks | Technical Analysis | Trading | Pharmaceuticals