First let me preface this piece with the fact that I am currently flat the Walt Disney Co. (DIS) , though this is a name probably found somewhere on my portfolio more often than not. Still it's hard not to root for the Mouse, as if it were a favorite sports team. The latest Star Wars offering, "The Rise of Skywalker" appeared to get off to a slow start, not loved by the critics, and underperforming other recent films released as part of the "Star Wars" franchise.

My children are in their 20's. The right age to be among a core group of fans that matured with the return of this science fiction phenomenon in 1999 after taking a couple of decades off. My kids and their pals went to see this movie, with a large group of their pals. Apparently, they had plenty of company. Suddenly, the total box office haul is already $725 million as this film is quickly gaining on it's own predecessor "The Last Jedi". Suddenly, the $1 billion mark is very realistic.

The Walt Disney Company has not seen a film pass the $1 billion level at the box office since way back in mid-December with "Frozen 2." Hot? You might say that. A week earlier than that, Disney was able to boast surpassing the $10 billion mark in movie receipts in aggregate for the year. Huzzah!!

Why I Am Uncertain On This Name

On the surface, everything does seem to be rolling the right way for Disney. The box office has been hot... the new streaming service, Disney Plus, has been just as hot, and provided the impetus for the impressive growth this stock has experienced across valuation metrics. That's all good. Heck, I am an avid subscriber to Disney's streaming bundle (Disney Plus, Hulu, and ESPN Plus for $12.99/month).

Still, an investor has to wonder, how can the box office possibly duplicate its own recent success? No "Star Wars" next year. Yes, there will be a couple of releases coming from the Marvel corner of the business, but in my opinion, not on the level of the "Avengers" movies. There will be a couple of Pixar releases, but is there something on the level of say a "Toy Story" flick? Perhaps. The studio is gong to have to rely on the live action remake of "Mulan", and hope that movie performs more like the remakes of "Beauty and The Beast" or "The Lion King" than what they experienced with "Dumbo."

Back to the incredibly successful launch of the firm's entries into streaming entertainment. This form of entertainment, at least in the present, is a much lower (in fact, it's expected to be negative for a bit) margin business than what the firm's traditional cable networks provide for basically the same content. Still, that entire industry has been in obvious decline for years, and Disney was not immune. Can the firm achieve the right mix in broadcast to maximize streaming's potential as competition only heats up, while maintaining the legacy business. Cash flow says they can, but perhaps the gains in equity valuation that primarily came in April 2019, have been made.

The wildcard in entertainment will be the better integration of the assets purchased from Fox, perhaps the "under the radar" asset acquired in that deal will be Star India, a network of 60 channels in eight languages that now reaches roughly 790 million cable and satellite subscribers in India as well as many other countries.

Did I mention park attendance? This has been unusually inconsistent this year, which surprised as new "Star Wars" features were opened at the U.S. parks. Then there is Hong Kong. The saving grace has been the higher spending consumer once inside the parks. To continue with that trend, the U.S. consumer has to remain strong. If indeed the spotty attendance was due to the strength in the U.S. dollar, that problem will correct itself as what right now seems to be a softer greenback could draw increased global tourism back to Orlando and Anaheim.

My caution perhaps stems from what for the most part appears to be rampant success in 2019 that leaves a high bar for 2020. Not that CEO Bob Iger can't top what the firm has accomplished thus far. They've done it before. I just wouldn't bet the farm. 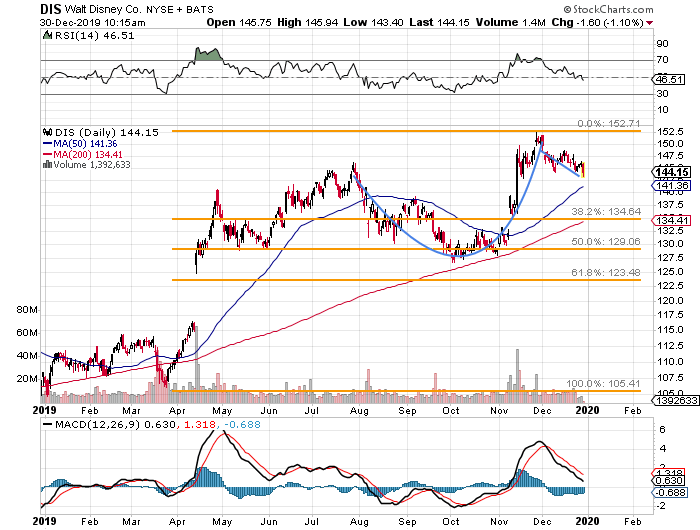 Technically, these shares have formed a four month cup. I am not sure if the past month represents as a handle. It might, and that would be bullish. My thought is that we'll know for sure how powerful this late 2019 weakness is as the shares approach their 50 day SMA. We see support there, and I would think a run at the $153 pivot would become very possible. We'll see a failure at the 50 day line, and that makes the 200 day SMA of $134 that much more likely. That spot would also just happen to be a 38.2% Fibonacci retracement of the entire 2019 rally in this name. One reason why I am leaning toward expecting that move is that Disney reports on February 3rd.

Plan To Accumulate Disney At A Discount (minimal lots)

Get an email alert each time I write an article for Real Money. Click the "+Follow" next to my byline to this article.
TAGS: Investing | Stocks | Technical Analysis | Trading | Media | Movies | India | Consumer Discretionary | Stock of the Day

The technical signals indicate a bit more aggressive buying of its shares of late.

Now Comes the Hard Job of Building on Wednesday's Bounce

The heavy selling pressure on certain areas of the market lifted, but generating more positive momentum will not be easy.