Is Twitter (TWTR)  done? Good question. More broadly, is big change about to come to social media in particular? Or to big tech more broadly. It all starts last Wednesday when a group of pro-Trump protesters crossed the line between protest and riot, when they invaded the U.S. Capitol Building and became violent. Many point out that the president had led them to this point and that he may have even incited the crowd to become more aggressive when he addressed the crowd when it was still a protest. No one will deny that the various groups that met in Washington that day coordinated to some degree through social media.

The quick response came from Twitter and Facebook (FB) , as the two had become this president's (Twitter especially) way to communicate with his base. Since then, Snap (SNAP) and Redditt have taken similar steps, and then the likes of Amazon (AMZN) , Apple (AAPL) , and Alphabet (GOOGL) all took the further step to boot a Twitter competitor, the much smaller Parler from either their app stores, or from using their web hosting services. Parler, for those who are unaware, is very much like Twitter in design, but had become a retreat of sorts for conservatives who felt that their free speech was being shut down at the more mainstream social media sites.

The broader problem for the tech giants is that in depriving Parler of even competing for eyeballs they come very close to proving the government's antitrust claims against them. It is said that some of those who committed crimes last Wednesday coordinated on Parler. I have no idea if that is true. If so, some kind of policing would have needed to be done, but to disable smaller competition from taking the field is the very essence of monopoly or oligopoly. There is a problem here. I had opened a Parler account. I found there to be very little interaction on the site, and felt that it might just die on the vine due to lack of interest. Twitter I use for business purposes, and Facebook is where I stay in touch with folks that might have at other times in history, left my life forever.

I noticed on Sunday that I had lost a few hundred followers on Twitter. I am not a big deal on Twitter, though I do participate. I currently have 11K plus followers and have never sought the "blue checkmark" as I always felt that non-celebrities that bear that mark seem a little ridiculous. I checked on a friend who has twice as many followers. He had just posted that he was down 500 followers. Checked on a much more famous follower, a well known author. He was down 8K followers. I thought maybe Twitter was purging the bots as they do from time to time.

I have a good number of Facebook friends that represent both sides of the aisle. I posted on Facebook... "Something going on at Twitter, They're either culling the herd or people are leaving." Within seconds, two Facebook friends "apologized" for being part of my loss of followers as they had cancelled their Twitter accounts. Then, a text from a friend who goes all the way back to my paper hat wearing days at McDonald's (MCD) . He had apparently closed both his Facebook and Twitter accounts. Said he was done with what he referred to as the political bias on those sites.

This is a bigger problem for Twitter than for Facebook. Facebook will still be the home of high school friendships kept alive, Instagram will remain popular. President Trump's personal account had 88 million followers on Twitter. There are more widely followed celebrities, but 88 million is still roughly half of Twitter's number of total average daily users. I have no way to measure, but it's probably safe to say that President Trump drove more engagement - negative and positive - per tweet than close to anyone else. As a lightning rod of division, he was an asset to Twitter, and probably the reason why Twitter's share price soared in 2017 and then held onto most of those gains over the next three years.

I see Twitter's chart as quite bearish. Let me explain. 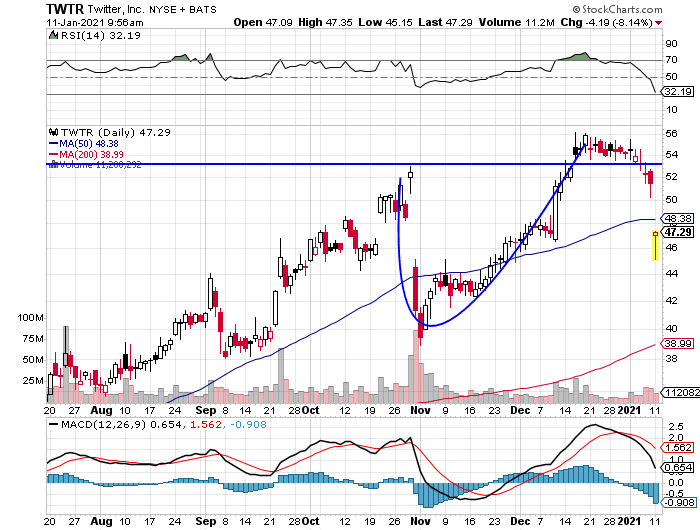 What we have here is a cup that spans late October through mid-December. When a cup adds a handle, we know that the pivot becomes the peak of the right side of the cup, right gang? Should no handle develop, you can still have a breakout, but the pivot remains the peak of the left side of that cup. The pivot here would be a rough $53. The ensuing breakout failed as December turned into January. What are our basic rules for target prices and panic points sans news events or other mitigating factors? Anyone? We look to take out earlier profits up 20% to 25%, and we admit we were wrong -7% to -8%. This simple disciplined approach enforces patience with winners, while discouraging patience with losers. It's effective.

Now, our first target price based on a $53 pivot would be $64. The panic point, however, would be $48. The shares have obviously pierced that level this morning on the news of the weekend. Another fairly strong negative would be how easily TWTR smashed through the 590 day SMA at $48.38. The only reason I see to finesse one's way out of this name, if already long, is that a gap has been created, and readers all know that I feel that there is almost always at some point an attempt to fill these gaps. This stock may waffle its way back into the $48 to $50 range. Anything better than that is gravy.

(FB, AMZN, AAPL, and GOOGL are holdings in Jim Cramer's Action Alerts PLUS member club. Want to be alerted before Jim Cramer buys or sells these stocks? Learn more now.)

Get an email alert each time I write an article for Real Money. Click the "+Follow" next to my byline to this article.
TAGS: Investing | Markets | Stocks | Technical Analysis | Trading | Media | Technology