It feels like we have breakouts all over the place so far on Monday. Chances are if you were long coming into the day, especially on the tech side of the ledger, then you're seeing plenty of green on your screen. Rather than chase, it may be better to look for a possible breakout setup.

Now, if you don't know the general rule here, it goes something like this:

Of course, every rule is meant to be broken, so there are times when I'll take a few speculative bets that involve anticipating a breakout. Over the weekend, I discussed the markets from a technical setup.

Nothing today has changed those views. In fact, today's action has reinforced those setups. That being said, it has also pushed us into resistance levels. I suspect we'll see a pause later this afternoon or in the first half of the week. Therefore, I'm looking for names that are setup to breakout, but haven't done so yet. Those are names I would like to buy on a breakout, preferably after the market has paused for a day or two.

A chart like Progyny (PGNY) fits that mold. I should note the fertility benefits management company comes with one yellow flag right now: insider selling. It's my biggest hesitation with the name. It has almost daily updated insider sales including a 10% owner slowly peeling off a small amount of shares every few days. They still have a huge position, but it may be preventing this breakout from occurring over the past month.

That concern aside, the chart is setup for a move to new highs. We have an almost picture perfect ascending triangle. Ascending triangles more often resolve upwards while descending triangles tend to do the opposite. That means the high low pattern is critical. A close under $28 should push traders off the name and looking for downside. Ideally, we'd see a close just above $30 to trigger an entry. The risk is we break through $30 and keep going intraday. That puts this stock in the category of traders likely needing to buy half around $30.15 and the other half of a position on a close above $30. 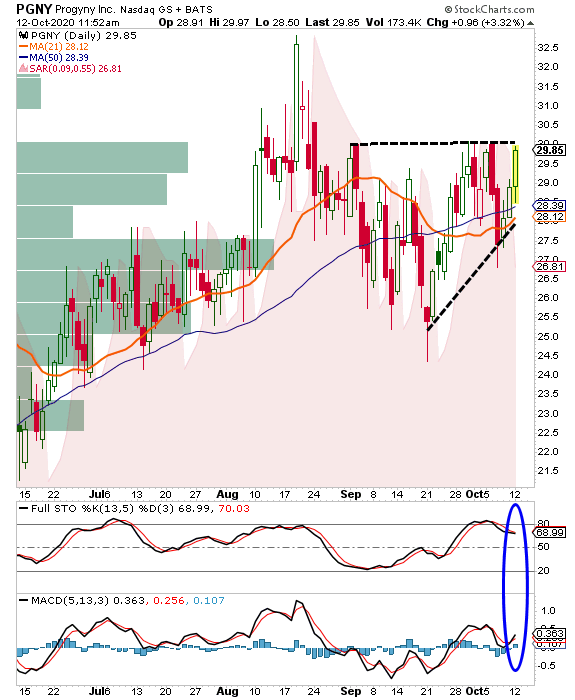 Even without closing above $30 today, the parabolic stop-and-reverse (PSAR) should remain triggered bullish on a positive close. Combine that with a bullish MACD crossover and we have reason to be optimistic. The Full Stochastics crossing over today would offer a trifecta of triggers in front of price. Again, don't anticipate, but if all of these are bullish, then I wouldn't second guess price when it does trigger.

I prefer simply playing the stock on the long side as the option spreads are too wide for my comfort. The ascending support line of the triangle should be used as a stop loss based on the closing price of PGNY.

Demand for PCs, tablets and gaming hardware all still look quite strong. And smartphone sales are gradually picking up.

Jim Cramer: These Do-It-Yourself at Home Stocks Have Staying Power

Here's when you make your move and start buying.