PayPal (PYPL) released a one sentence response to recent rumors that had put PayPal together with social media name Pinterest (PINS) in a deal that would have made no sense to me. Apparently, PayPal management led by president and CEO Dan Schulman felt the same way I did.

The rumor started swirling last Wednesday, the first of three down days for PayPal's stock. Bloomberg News had reported that the two sides were in talks, and the price that was thrown around at the time, was $45 billion or about $70 per share.

I spent late Wednesday afternoon in a Twitter (TWTR) "Spaces" (chat room) that involved a bevy of traders younger and savvier than I. They respectfully asked for my opinion first. I said that I did not see a good reason for this corporate marriage, but that I could be missing something, and I am admittedly better in analyzing traditional financials than I am in FinTech.

I deferred to the other traders, eagerly awaiting the possibility that any one of them may have had a thought that had not come across my brain. For the most part, these younger traders were even more adamantly opposed to the potential deal than I was. That confirmation by my younger peers provoked me to initiate a long position in PYPL on Thursday, and get longer on Friday as the stock sank lower.

Monday morning. Pre-opening. PYPL was up 13%, but not back to last Tuesday's levels. PINS was down 15%, and is trading below last Tuesday's levels. My long position is in PayPal, a name that I had long looked for a point of entry on, as I felt that I had missed the fantastic late 2020, early 2021 performance. The shares closed on Friday, 22.5% below their June high of $310.

PayPal is expected to release the firm's third quarter financial results the second week of November. The name is highly covered. Wall Street is looking for EPS of a rough $1.08 on revenue of $6.24 billion. These numbers, if precise, would amount to earnings growth of one penny on revenue growth of 17.5%.

Going back to the second quarter, total active accounts surpassed 400 million, TPV (total payment volume) popped 40% to $311 billion on 4.7 billion payment transactions, which was up 27%. Merchant services volume increased 48%, while Venmo processed $58 billion in TPV, up 58%. Still, the revenue number was a tad light relative to expectations for the second quarter, and the firm softened up full year guidance just a touch.

Opportunity was born, but you had to be patient. Hopefully, this rumor - or was it a miss? - was such a catalyst. Perhaps, PayPal is fishing for a partner better suited to a merger with a financial services tech company. My guess is sooner or later, this tale will tell itself.

Why Invest In PayPal?

COVID only accelerated what was already in motion. The move toward a cashless society has been led by the consumer, instead of by a government simply hoping to capture a record of every single transaction. Buy Now, Pay Later is a part of that, and its demand is strong for those trying to move away from traditional credit cards. For this firm, the BNPL growth has been more of an external (ex-U.S.) story. The firm also allows users to buy, sell and hold cryptocurrencies ramped to Venmo as of last April.

In addition, PayPal recently launched its "Super App", which combines almost everything into one place, and is considered a competitive strike against Square's (SQ) Cash App. Finally, because you knew that I would mention it, at least as of the end of the second quarter, the firm's net cash position (cash, equivalents, short-term investment) was more than twice the size of the firm's total debt-load, while free cash flow, though down 33% for that quarter, still topped $1 billion. 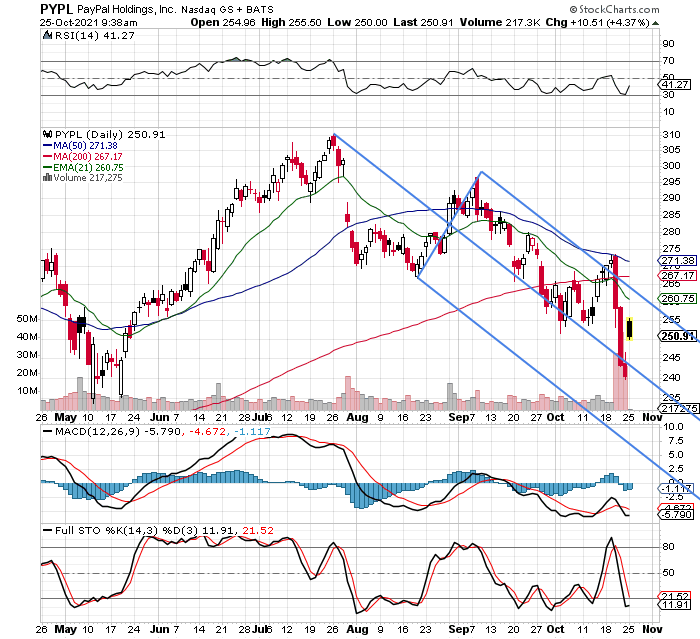 This morning's move keeps PYPL in the upper chamber of our downward sloping Pitchfork. The short-term goal for this trade is to exit at or close to the 50 day SMA, currently $271. What could short-circuit that potential move would be a death cross, should that 50 day line cross bearishly below the 200 day SMA at $267, which will happen should PYPL dilly dally down here beneath both averages.

What we would love to see would be a compilation of what may be an inverse head and shoulders pattern. Right now we just have a neckline and half a head, so there is a long way to go. We see this, and then we have to readjust our goals for the position.

(PayPal is a holding in the Action Alerts PLUS member club. Want to be alerted before AAP buys or sells PYPL? Learn more now.)

Get an email alert each time I write an article for Real Money. Click the "+Follow" next to my byline to this article.
TAGS: Earnings | Investing | Stocks | Technical Analysis | Trading | Fintech | Technology