Sometimes a corporation reports financial results and those results are not the story. Sometimes a preclinical biotech is busy developing 21 messenger RNA vaccine candidates meant to prevent a number of maladies, but the public only cares about one. Maybe not sometimes. Maybe just this time. Maybe just one company. Moderna (MRNA) . There are two vaccines that appear to be closest to releasing data from Phase 3 studies, as the world reaches for protection from Covid. They both used experimental messenger RNA technology to get to this point so quickly. The other, Pfizer (PFE) , in conjunction with BioNTech (BNTX) have already let the public know that they have not seen enough "events" to release interim data as soon as hoped for. Now, attention turns to Moderna.

Moderna reported Q3 EPS of -$0.59, which badly missed consensus. However, the firm posted revenue of $157.91 million, almost doubling expectations and good for year over year growth of 826%. Interestingly, revenue from grants came to $145.7 million, while grants from collaboration efforts amounted to $12.2 million. Add them up? $157.91 million. The firm showed research and development expenses that reached $344.5 million, nearly tripling from a year ago, while administrative costs increased to $48.5 million. Hence, the firm put an operating loss of $235.1 million to the tape. Seemingly not so hot.

The focus of the public when it comes to this name is the timing of mRNA-1273, the firm's two dose hopeful protection against Covid. The firm has already taken in $1.1 billion in deposits from governments around the world, waiting on news regarding safety and efficacy. Orders have come in from North America, the Middle East, and most recently Japan. The firm reminds us this morning that Phase 3 testing has been fully enrolled at 30K healthy participants. Of these participants, 37% come from diverse communities, 42% are considered to be "high-risk", and 25,650 have already received their second dose.

On Thursday morning, CEO Stephane Bancel indicated that Moderna expects the data and safety monitoring board to conduct an interim analysis sometime in November. Upon eventually reaching some level of emergency use authorization (which would come from the FDA in the U.S.), Bancel said, "We are actively preparing for the launch of mRNA-1273." Bancel added, "Moderna is committed to the highest data quality standards and rigorous scientific research as we continue to work with regulators to advance mRNA-1273."

Taken from the material provided by the firm this morning, Moderna expects positive net cash provided by operating activities and used for purchase of property and equipment to be between $0.1 billion and $0.3 billion, driven by the already mentioned deposits placed down on mRNA-1273. The firm has a number of other vaccine candidates in the pipeline. We could go into those. Some are close, but none are closer than mRNA-1273, nor will the rest drive either revenue like this, nor attention. 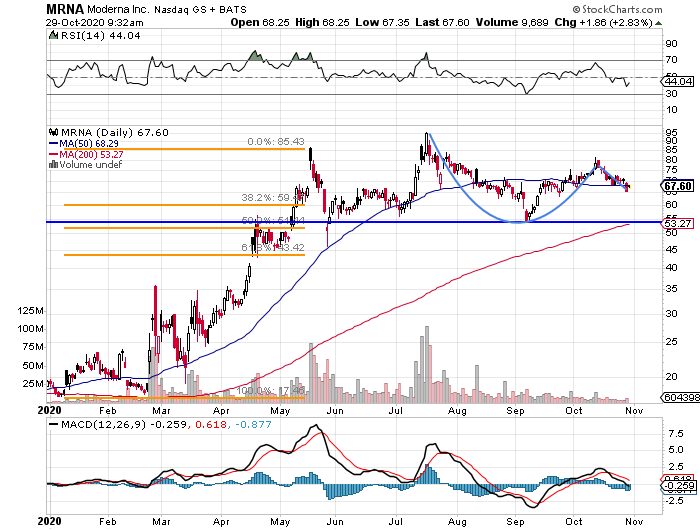 There's a lot going on here. Last spring, as Covid became reality for so many of us, these shares rallied hard as the name "Moderna" became a household word. At first the shares found support where Fibonacci fas would look for it. As time moved along, baseline support was built and tested on multiple occasions close to the $54 level.

Now, it appears that this support level has evolved into the bottom of a cup that has now developed a handle. First order of business is to recapture the 50 day SMA at $68.29. We see a "take and hold" there and these shares can make another run at the new pivot of $81. MRNA takes that spot and then we are writing about target prices up above $105. A lot has to happen for that to happen, and it will all be reliant upon positive headline risk.

I am long this name, and have traded it, and run with a current net basis of $29.95 adjusting for options sold against the position earlier this year. This is house money, so I don't have to panic, but if I did, it would be down around the 200 day SMA of 53.27, just below established support.

Get an email alert each time I write an article for Real Money. Click the "+Follow" next to my byline to this article.
TAGS: Drug Approvals | Earnings | Investing | Stocks | Technical Analysis | Trading | Biotechnology | Coronavirus

End to China's Recovery Shows Policymakers 'Care About Growth, Just Not Much'

Poor July numbers erase hopes of a strong second half to the year, where lockdowns and the 'zero-Covid' policy have undermined confidence and activity.