Warning !! I guess we should have seen this coming. Last Wednesday, a mass vaccination site in Colorado was closed after several people reported side effects after receiving the viral-vector based COVID-19 vaccine developed by Johnson & Johnson (JNJ) . At that point, 4.5 million doses of this vaccine had gone into American arms and of those, 129 individuals had experienced side effects serious enough to go to an Emergency Room.

Then last Friday, the European Medicines Agency, or EMA, initiated a review of the possibility of a linkage between this COVID-19 vaccine developed by Johnson & Johnson and blood clots after four serious cases of "unusual" clots accompanied by low counts of blood platelets on the continent had occurred following vaccination. The JNJ "one and done" jab had been approved for emergency use in Europe, but had not yet been rolled out.

The news broke. I had already submitted Market Recon (here) to the editorial staff. This news surely would have changed my morning column. In the U.S., the Food and Drug Administration (FDA) and Centers for Disease Control and Prevention (CDC) jointly recommended a pause in the public use of JNJ's COVID-19 vaccine in order to investigate these rare but severe cases of unusual blood clotting after six U.S. recipients had developed this disorder within two weeks of inoculation. According to the New York Times, all six cases involve females, with one already having passed away and another currently in critical condition.

Patients who have already received the JNJ jab are being advised by both of these U.S. regulatory agencies to notify their doctors if they should develop headache, abdominal pain, leg pain, or shortness of breath within three weeks of said jab. Doctors are being cautioned that they should not follow the normal course of treating blood clots, that would be to use a drug known as heparin, as with this rare type of clotting with low counts of platelets, heparin could be dangerous.

Oddly enough, at least so far, the two vaccines based on experimental messenger RNA technology, the offerings from Pfizer (PFE) / BioNTech (BNTX) and Moderna (MRNA) have to this point, appeared to be both safe and effective. Of course we don't know what long-term effects any of these vaccines might ultimately show. The viral vector based technology based vaccines developed by Johnson & Johnson as well as AstraZeneca (AZN) , which is a more tried and true method of vaccine creation, have had more questions raised around side effects and more specifically blood clotting. Several European nations have paused and restarted usage of the AstraZeneca shot which is yet to gain emergency use authorization in the U.S.

Does this slow down the effort to broaden the vaccination effort in the U.S.? Of course, but perhaps not to the extent that it might have had the JNJ shot been the game changer that we had originally thought it might be. They have had issues with the manufacturing process, and quite frankly have not brought to bear the numbers of shots that we had thought they might early on. Pfizer/BioNTech and Moderna have really stepped up to the plate in a time of crisis. This morning, the stocks of all three of these vaccine makers as well as that of Novavax (NVAX) whose vaccine candidates could apply for emergency use authorization as soon as May are all trading higher as JNJ's stock shares sold off a bit, currently down about 2%.

What would be a nightmare for not only the reopening of the economy, or simply a return to normal life, would be a problem with either of the two vaccines currently in widespread use in the U.S. For now, it is key to note that JNJ's EMU has not been revoked, not has there has been any causation established between this vaccine and those patients. These events remain extremely rare and need to be looked into. 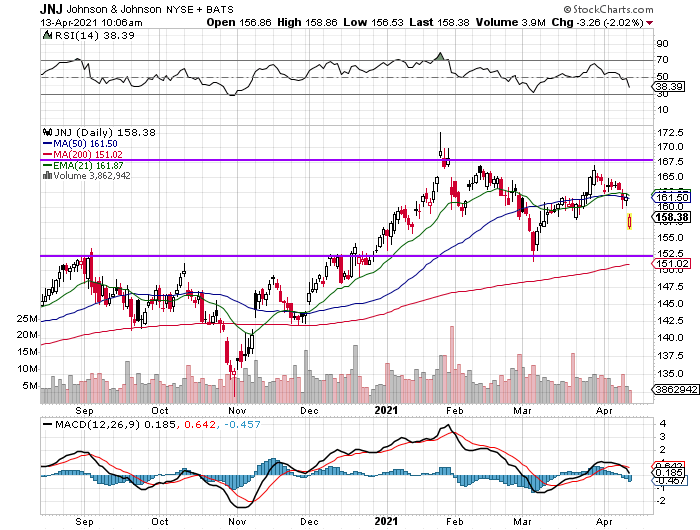 I am long JNJ, MRNA and PFE. Am I bailing out of JNJ right now? No. That said, sans any news events, I would look for this morning's gap to fill at some point. In the meantime, the shares remain well entrenched within the confines of a consolidating base in place since January. I don't love the stock. I have held it a long time and I am only up small, though the stock does yield 2.55%.

There is really no reason in my opinion to act unless the 200 day SMA fails to hold, all the way down at $151. Regulators may very well decide that the benefits still outweigh the risks and then inoculation goes on, with an extra warning. Don't forget, this is a very large company with a lot more than this going on. If you like JNJ, this does not change your mind. If you had a JNJ jab scheduled for next week, which one of my children had, then you may want to change that appointment, rather than wait for an update on the JNJ shot from regulators.

Get an email alert each time I write an article for Real Money. Click the "+Follow" next to my byline to this article.
TAGS: Investing | Markets | Stocks | Technical Analysis | Trading | Healthcare | Coronavirus