Honeywell (HON) always beats. So, how'd they really do. First, I am long this name. It's probably one of my favorite highly diversified, old school industrials. I'm not selling the stock this morning after yet another overall beat just because one key business unit very understandably underperformed. Let us discuss.

For the first quarter, Honeywell reported adjusted EPS of $1.92, beating the street by 12 cents. FYI, GAAP EPS printed higher than the adjusted version (we like that), and beat the street by more (we like that too). Revenue generation for the period landed at $8.46 billion, virtually flat though organic sales decreased by 2%, but was still good enough to beat consensus. Now, these numbers are solid, but definitely not all candy canes and licorice. Operating Income contracted year over year from 20% to 17.8%. The above mentioned adjusted earnings amount to "growth" of -13%. Cash Flow from operations increased 4%, while Free Cash Flow contracted 5%. Let's break out the firm's businesses.

The firm experienced declines in the two largest segments, the largest of the two experiencing a significant drop. The firm also experienced growth in two segments, one bearing growth of such magnitude that it now challenges those two larger businesses for leadership.

Sales printed at $2.632 billion, down 22% year over year. Fortunately margin improved from 27.9% to 29% here so the decrease in segment profit experienced "only" a decrease of 19%. This is completely understandable as there has clearly been a pandemic induced reduction in demand for commercial aircraft for some time now, and Honeywell is a cog in Boeing's (BA) 737-Max program.

Okay, this is the unit that provides warehouse automation equipment to major clients such as Amazon (AMZN) , as well as PPE (personal protective equipment) such as N-95 masks in response to the pandemic. This group made sales over the three months that amounted to $2.118 billion, up a whopping 49% from the year ago period. Margin improved for the segment from 12.5% to 14.3%, hence segment profitability charged ahead by an incredible 70%.

The cash balance is down a bit, while most other entries on the asset side appear to be in line with entries from one year ago. Hence total current assets are off a rough $2.5 billion or so. Goodwill is up a little but not enough to alarm. Total current liabilities are also lower (roughly $1.2 billion) driven primarily by maturities of long-term debt. Overall, the balance sheet remains strong. The cash expense is completely understandable given the environment. The firm is well positioned to do whatever it needs to do... return cash to shareholders, buy growth, whatever it needs.

My best guess is that by the grace of a good God, the increased need for PPE may recede. By the same token, reduced demand for PPE probably runs on the same track as increased demand for commercial aircraft, so such a development is a good thing. The warehouse automation equipment that became so key during the pandemic is in my opinion, going nowhere. As you have changed the way in which you express demand for consumer goods, the way to safely and efficiently meet that demand has also evolved. I think that business only grows from here.

Honeywell increased guidance across the board for the full year. The firm now sees adjusted EPS at $7.75 to $8, upping the low end of that range from $7.60. Wall Street had already been up around $7.90. The firm now expects revenue to end up in the $34 billion to $34.8 billion range, upping both ends of a prior forecast of $33.4 billion to $34.4 billion. The street is already around $34.3 billion on this metric. Honeywell also expects full year operating cash flow of $5.8 billion to $6.1 billion to produce free cash flow of $5.2 billion to $5.5 billion. 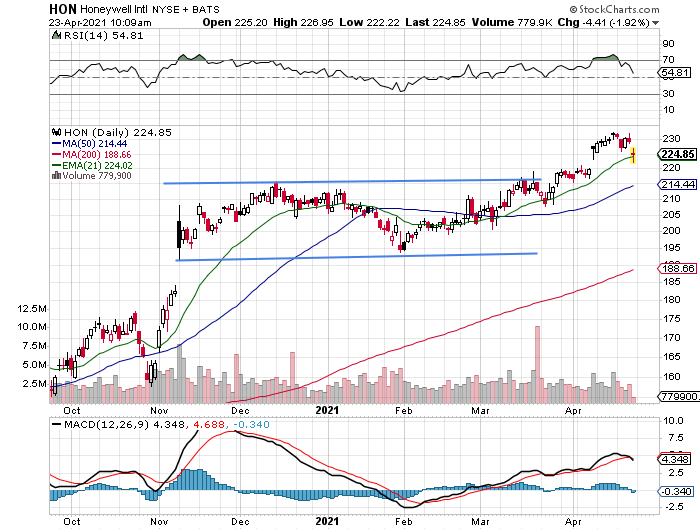 Am I concerned with this selloff? No. The stock went through an almost five month basing period of consolidation after breaking out last November. Actually, I see filling the gap created in early April as healthy. I just hope the algos forget about that gap in November. Gaps don't have to fill, but they usually do.

Hence for today, the 21 day EMA of $224 is the spot. That's for traders. Investors should probably see the 50 day SMA of $214 as a panic point instead of allowing that earlier gap to get back in range. My target price has been $260 for HON for some time. I see no reason to change that at this time. The pivot that created that target had been the upper bound of that consolidation (roughly $216), and the shares are not yet even threatening that spot.

(Honeywell, Boeing and Amazon are holdings in Jim Cramer's Action Alerts PLUS member club. Want to be alerted before Jim Cramer buys or sells these stocks? Learn more now.)

Get an email alert each time I write an article for Real Money. Click the "+Follow" next to my byline to this article.
TAGS: Earnings | Investing | Stocks | Technical Analysis | Trading | Industrial Goods | Industrials