The Glimpse Group (VRAR) came public back in July. Shares quickly left the $7.00 pricing in the dust, but the excitement didn't last. After poking its head above $18 on day one, shares retraced all the way back to the offering level. That's a rough ride, but the offering price has held. If you missed this one the first time around, it may be worth a consideration on the second pass at $7.00. This is a small company in terms of market cap, so it should only find a home in a portfolio seeking high potential rewards for taking high risk. It lives in the highly aggressive category of ownership.

If you can tell from the ticker, The Glimpse Group operated in the virtual reality (VR) and augmented reality (AR) business. VR. AR. VRAR. It took me a few tries to see it. Probably says more about my age than anything, but I digress. Despite being public for a short time, the company has already released two earnings reports. The most recent one only came a few weeks ago when VRAR reported revenue of $3.42 million, a 76% increase from the year earlier. The top line number isn't the story though. During the quarter, VRAR landed a preferred AR partnership with Snap (SNAP) . Additionally, the company expanded their AR portfolio and began development in the NFT arena. Software and service revenue rose 239% from $510,000 to $1.73 million. It's reasonable to conclude growth better be triple digits when coming from a six-figure number.

The launch into the NFT industry involves targeting VR and AR software and services for uses in things like VR art gallery space, AR based NFT displays, and super high resolution NFTs. The use of AR and VR in the NFT space is still incredibly new but the application potential already exists with the emergence of Sandbox and other Metaverse endeavors. 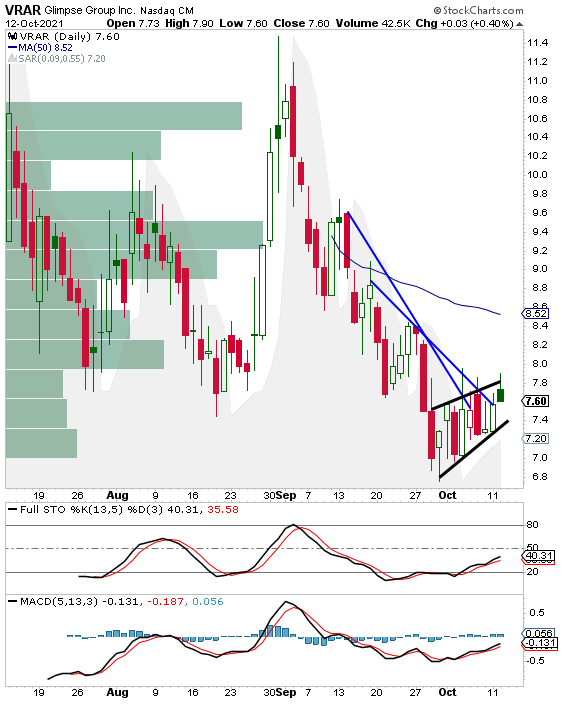 Shares couldn't quite hold their rally yesterday. They have broken above the longer downtrend line. The worry here is we're seeing a bear flag form. A close under $7.40 should create concern. Any close under $7.20 should have traders looking for a retest of $6.80. The rising MACD and Full Stochastics are a positive here although watch the midline as possible resistance on the Full Stochastics indicator. A close over $7.80 should set the stock up for a test of $8.40 to $8.50.

Overall, I'm intrigued by this tiny name. I believe AR and VR will be a huge growth space over the next several years. VRAR continues to scoop up smaller players in the space, adding to its software and services and its revenue. While I prefer organic growth, when you're this small, getting revenue via small acquisitions can make sense, especially if they are non-cash acquisition. A close over $7.80 will have me taking a longer-term position, otherwise, I'll look for a buy in the $6s, but I do want to add some VRAR to my most aggressive holdings.

Please note that due to factors including low market capitalization and/or insufficient public float, we consider VRAR to be a small-cap stock. You should be aware that such stocks are subject to more risk than stocks of larger companies, including greater volatility, lower liquidity and less publicly available information, and that postings such as this one can have an effect on their stock prices.

Get an email alert each time I write an article for Real Money. Click the "+Follow" next to my byline to this article.
TAGS: Investing | Stocks | Technical Analysis | Trading | Software & Services