It was the "eureka" moment, as I read the press release. Of course! How to revive or at least drain more value from a beloved, but way past mature American brand name. Talk about a consumer staple. The Kellogg Company (K) closed on Friday night at $67.54, down just 10.6% from the apex of an early-May earnings related spike that showed that the firm still had some pricing power and pricing power is key in 2022. Without those two weeks in May, Kellogg closed on Friday close enough to multi-year highs.

The announcement broke at 07:00 am ET Tuesday morning. Kellogg would break into three separate independent companies, by spinning off the US, Canadian and Caribbean cereal and plant-based businesses. These businesses accounted collectively for a rough 20% of the firm's 2021 revenue generation. The remaining business is to be focused on global snacking, international cereal and noodles, and North American frozen breakfast. I am not going to lie. I am intrigued.

The three companies that are currently unnamed would be the following...

1) "Global Snacking Company" with a rough $11.4B in net sales. This will be the global snacking company mentioned above that will also sell frozen breakfast in North America and cereal/noodles internationally.

2) "North American Cereal Company" with about $2.4B in net sales. This company will be where the firm parks its legacy North American, Canadian, and Caribbean breakfast cereal business. The idea here might be to stabilize this business. I know that breakfast cereal is seen as a business in decline. That is certainly not my fault.

3) "Plant Company" with just about $340M in net sales will be a pure-play plant based foods company led by brand name Morningstar Farms and meant to compete directly with firms like Beyond Meat (BYND) and Impossible Foods.

The North American cereal spin-off is expected to come first with both spin-offs expected to be completed by the end of 2023. Shares in the "spun-out" independent companies will be distributed pro-rata relative to investor stakes in the parent or existing company. It is thought that the remaining parent is likely to be the company with the higher growth potential, and more growth potential than today's company as one large unit. Almost 60% of net sales are currently from snack brands such as Pringles, Cheez-It, and Pop-Tarts.

The truth is that though some of us still love the brands, but the company, despite a nice looking first quarter, has not been in the greatest shape fundamentally. Free cash flow remained positive throughout, but the balance sheet has not been without its issues. As of April, Kellogg had a net cash position of $318M, and current assets that totaled $3.816B. This measured up quite poorly against current liabilities of $5.848B for a current ratio of 0.65. That's awful. Omitting $1.559B in inventories, Kellogg runs with a quick ratio of 0.38. Change, as you can see, was required here.

Total assets add up to $18.6612B including $8.192B in "goodwill" and other intangibles. Now, I am not about to suggest that the Kellogg brand name is not worth a whole lot, but I would prefer that 44% of all assets not be of the variety that can not be entered into, sat in or on, seen or counted. Total liabilities less equity amounts to $14.317, including $6.004B in long-term debt.

Obviously, the cash on hand is (more than) a little light, especially when considering that not only is $896M of that $6B in long-term debt considered to be "current" but the firm has another $450M in short-term borrowings not included in the $6B. Hence the firm is servicing $1.346B in current debt. Kellogg has a tangible book value of $-13.01 per share. This balance most certainly does not get a passing grade from your pal.

This is a tough one. I want to like this stock. Trades at just 16 times forward looking earnings. Pays shareholders $2.32 per year per share, yielding 3.44%. Doing the right thing in trying to create a profitable and growable company from one that was not really all that growable. Kellogg has grown revenues (year over year) by +3%, +6%, -1%, and +2% the past four quarters.

So, shareholders will end up with a piece of all three companies, but the firm itself is probably only considered the largest slice of the firm worth keeping. The North American cereal business is stagnant. You have all seen how small that aisle is these days at your grocer. The plant-based food business is a business with potential. That said, it's not like Beyond Meat's EPS is moving in the right direction, not to mention the share price.

We hear that the dividend will stay. That's a positive. How about that debt-load? Still makes investing here somewhat daunting. The stock was trading higher at the opening bell. Apparently keyword reading algos love this kind of stuff. But will you? If you own it longer-term? The algorithmic traders will sell letter K after they jack the price. Many times over just by lunch. They will not be in the name with you, once you invest. 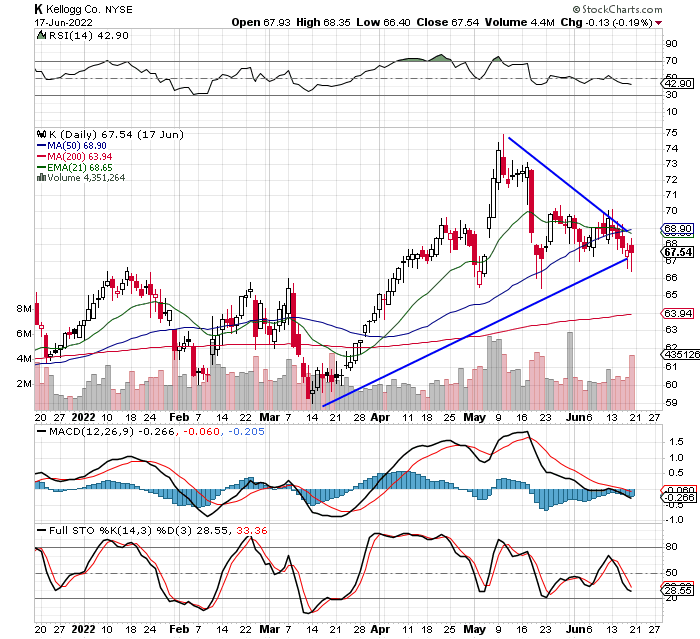 Traders will get their explosive move this morning, as the chart implies. That said, I think that if someone really wanted to own this stock, after understanding that this is speculation and you are accepting the bad with the good, that maybe this morning is not the best time. The markets are opened higher for letter K. Earnings are due in early August. Maybe the trader can get paid to take on equity risk (sell August 19th puts) at $70 or $67.50 in mid-August. Might be better than taking on equity today at $71 or $72.

I started writing this piece thinking about owning these shares. The horrendous condition of the balance sheet convinced me to only do that at a discount.

Get an email alert each time I write an article for Real Money. Click the "+Follow" next to my byline to this article.
TAGS: Investing | Stocks | Technical Analysis | Trading | Food & Staples Retail | Retail | Consumer Staples | Consumer Products