Groceries were just delivered. True story. Stopped working. It'll be quick. Love being alone. Everything is put neatly in its place rapidly and in good order. Just place the eggs over here... and ooh. There is the Modelo. Is it Friday night? Wednesday morning. I'll have to hold that thought.

About an hour before my groceries arrived, Constellation Brands (STZ) reported the firm's fiscal second quarter financial results. The firm posted adjusted EPS of $2.38, missing Wall Street's expectations by more than $0.40. GAAP EPS? Close your eyes. Okay, Just kidding. You can look... $0.01, no joke. However, revenue generation hit the tape at $2.37 billion, which while up a respectable 4.9% from the year ago period, also beat consensus view. What gives? It's complicated, so let's talk.

The EPS of one penny amounts to earnings of $1.5 million, down from $512.1 million for FQ2 last year, or $2.62 a share. Basically, many, many professional athletes brought home more dough than did Constellation this quarter. The problem, aside from rising costs that are industry/economy wide, is their investment in Canadian cannabis/loss center Canopy Growth (CGC) . Ex-Canopy, the wine and spirits business earned $2.57 per share. Cannabis may or may not be a gateway drug, but for Constellation, it is a gateway to something.

Going over the statement of operations, net sales as mentioned increased 4.9%. Even away from the investment loss, which came to $470.8 million, down from a loss of $80.7 million a year ago, the firm ran the quarter with general and administrative expenses that gapped 22.8% to $490.5 million. The firm also spent another $29 million extinguishing some outstanding debt. Pretty much explains the gist of it. Rising costs that may have appeared almost, but not quite manageable if not for that hard-hitting loss on the investment made up in the land of ice and snow.

Should investors be concerned? Guess that depends on the cannabis business. We know the beers are quite good. One of you might know if the wines are good. I'm Irish, I have no idea. The firm burned through $357.2 million in cash over three months, and that's really a shame because organically, beer and wine & spirits sales are growing. Let's glance at the balance sheet, Cash, you already know took a hit. Current assets not so much, as there is still enough dough out there in accounts receivable. Let's hope everyone pays their bills.

Current assets are larger than current liabilities, and total assets are significantly larger than total liabilities less equity. I'll tell you one thing I am not crazy about. Okay two things. First, the $486 million in new borrowings that appears for the first time this quarter, and second... $10.081 billion in long-term debt. That's a lot of bread, man. More than a full year's revenue at the current pace. The firm can pay their bills. This is just something to watch, and should Canopy do a little better moving forward, some of this concern abates on its own.

Constellation also affirms the operating cash flow target of $2.4 billion to $2.6 billion, and expects free cash flow to land around $1.45 billion. The outlook is certainly positive.

Would you rather buy the beer or the stock? Hmm. 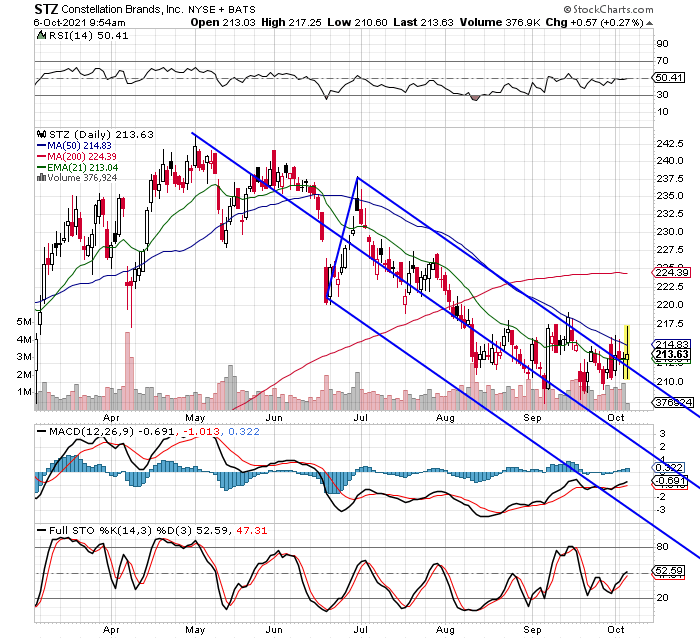 We see on this Wednesday morning the shares trying to break out (two words) of a downward sloping Pitchfork that has been in place since late April. These shares already failed on one breakout (one word) attempt last month. Should this hold, we can then think about retaking the 50 day SMA using the 21 day EMA as support. Failure here could very well send the shares back toward the central trendline of our model. Especially with the broader market looking for reasons to de-risk at least until supply chains unkink, energy shortages abate, Congress gets squared away, and birds sing while children play at the beach on a sunny afternoon.

Get an email alert each time I write an article for Real Money. Click the "+Follow" next to my byline to this article.
TAGS: Earnings | Investing | Markets | Stocks | Technical Analysis | Trading | Beverages | Cannabis