A month ago, Coinbase Global (COIN) reported an incredibly positive second quarter performance. The firm posted GAAP EPS of $6.42, beating the street by nearly $4. Revenue generation for the three months amounted to $2.23 billion, also easily beating Wall Street, and up almost 1,100% year over year. Trading volume at the cryptocurrency trading platform provider had increased to $462 billion for Q2 2021 from just $28 billion for Q2 2020. Actual Bitcoin trading had decreased to 24% of the trading volume pie, while trading in Ethereum had increased to 26%, with all lesser known cryptos together combining for the other 50%. The firm did warn investors at the time that it expected increased regulatory scrutiny to encroach on these markets.

What Happened to Bitcoin?

All with an interest in Bitcoin, cryptocurrencies of mere spectate from the sidelines had been waiting for yesterday (Tuesday) since El Salvador's legislators had passed a law in June making Bitcoin legal tender in that nation (to take effect yesterday) alongside the U.S. dollar. There was talk across social media of a coordinated attempt by the retail crowd to buy Bitcoin alongside El Slavador's move in expectation of creating a robust upside day for the blockchain-based asset.

Only it all backfired. Oh, El Salvador went through with that nation's plan, with even President Nayib Bukele updating investors throughout the day on how many Bitcoin the nation's Treasury had amassed. At last count, the number had been 550. Unfortunately, there were a number of events that saw Bitcoin head south in price on its big day, and it appears to have been more than a "sell the news" event.

For one, El Salvador's digital wallet had to come offline for repair before being restored. Secondly, trading platform provider Coinbase Global reported service issues amid heavy volume. Earlier, transactions had been delayed and cancelled with apps showing error messages. Lastly, according to cryptocurrency futures trading platform Bybt (which I found at Motley Fool), more than $1.2 billion in Bitcoin long options were forced to liquidate on Tuesday, up from just $24 million in forced liquidations on Monday. Traders, it seems, had made large bets using margin that failed to pan out as Bitcoin and other cryptos slid in value. Bitcoin did stabilize at a rough $45K, down 9%-ish for the day, but had been down as much as 17% at the lows. Other cryptos sold off for the day as well.

Coinbase shares slump early as the firm receives a "Wells Notice" from the SEC (Securities and Exchange Commission). A Wells Notice basically informs that the SEC has an intent to sue, and in this case, the SEC intends to sue Coinbase if they go through with launching the planned "Lend" product, as the SEC believes that "Lend" itself is a security. The Lend program would allow platform users to earn interest on their digital assets by lending those assets out to other users.

Coinbase CEO Brian Armstrong is quoted as saying, "They refuse to tell us why they think it's a security, and instead subpoena a bunch of records from us (we comply), demand testimony from our employees (we comply), and then tell us they will be suing us if we proceed to launch, with zero explanation as to why."

Remember that at the time of that Q2 earnings release, Coinbase did warn investors that the month of July had gotten the third quarter (Trading volume of $57 million) off at much slower pace than the firm had experienced for the second quarter. I see 14 analysts covering the stock. With Q3 numbers due in early November, consensus view for EPS is currently in the $1.30's, with a range of expectations that spans more than a dollar in both directions... so this needs to be refined as we close in.

Revenue projections appear to be centered around $1.45 billion, but are just as scattered. Basically, the data will likely show triple figure growth for both earnings and revenue year over year, but also show sequential contractions of 84% and 35%, respectively. Coinbase is sitting on a lot of cash and cash equivalents. There is some long term debt, but that is heavily outweighed by the cash position. Current assets and total assets easily dwarf current liabilities and total liabilities less equity. Say what you want about Coinbase or the industry, I do not see the balance sheet as an issue at this time. 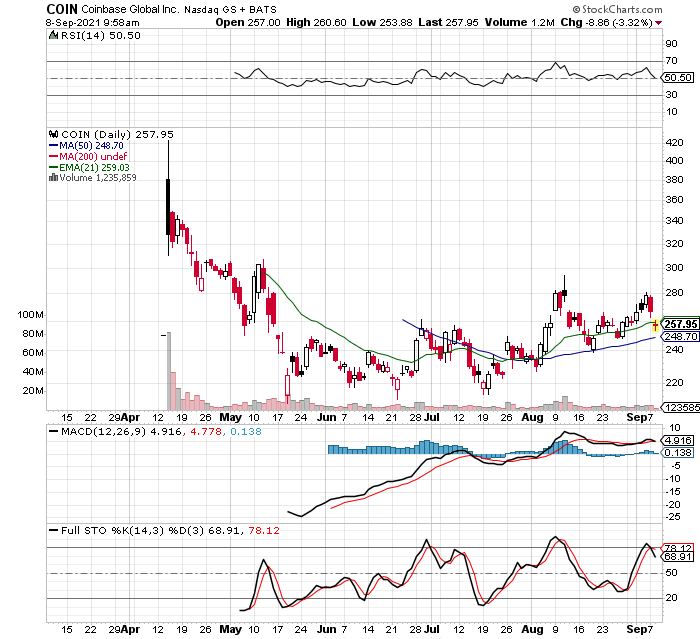 I lost a little money on this one out of the chute, so forgive me if I am a little careful here. The stock has not traded publicly long enough to have a 200 day SMA. It does appear that so far, the stock has for over a month found support at the 50 day SMA, largely ignoring the 21 day EMA.

The Full Stochastics Oscillator and the daily MACD both seem to whisper "Be careful little buddy", while the RSI seems indifferent to what we do. For me, it comes down to this. Do I need to be in Coinbase? No. Do I think that cryptocurrencies in general are going to be fighting SEC Chair Gary Gensler for probably years? Yes. This is without the Federal Reserve (or other central banks) even coming up with it's crypto-dollar (or other fiat cryptos), but I think that is a certainty. Sovereigns and their central banks are going to fight for monetary supremacy. This will be about power.

For a trade, I am interested in COIN close to the 50 day line. As an investment, I am not interested at all. Should these assets stop trying to be seen as currencies, which they are not... and trade more like commodities, which is what they are, I become more involved.

Get an email alert each time I write an article for Real Money. Click the "+Follow" next to my byline to this article.
TAGS: Bitcoin | Commodities | Earnings | Investing | Markets | Stocks | Technical Analysis | Trading