How could you not be impressed? How can a trader pretend he wasn't wrong coming in flat when a name pops like this overnight? Still, I don't chase. I never chase. That's human response to emotion. No room for emotion. That's how people get hurt.

Broadcom (AVGO) reported their fiscal first quarter results on Thursday night. First, I'd just like to say that I still have to pause for a second when I speak on this name. Four years later, my brain still shouts "Avago" when it goes there. Shake it off, Sarge. Back to what matters. You're right. Rock on. Broadcom turned a nice profit for the quarter, crushing expectations by 32 cents. Revenue though up 8.7% printed $40 million below expectation. That revenue print was clearly not the big story.

The big story, or should I say stories are plentiful. Let's recount a few. Though CEO Hock Tan, who I might add... rarely makes a mistake (Hint: That CA acquisition may be turning out a-okay) said, "Similar to our peers, we see a slowdown in China impacting demand. However, much of this was factored into our original guidance and we are maintaining our full year fiscal 2019 business outlook." The firm guided the full year toward revenue of $24.5 billion, above consensus despite this Q1 miss, suggesting better days in the short to medium term future. But wait, gang... there's more...

- While Semiconductor Solutions declined (was expected), Infrastructure Software exploded to the tune of 328% growth. This is now a major business line for the firm.

- Plans to return $12 billion to investors for this full year, after returning $4.6 billion over the past quarter. Part of that will be the just announced $2.65 quarterly dividend, yielding close to 4% payable on March 29th to shareholders of record on March 21st.

Of course everything is not all gummy bears and sunflowers. I am an old fashioned balance sheet kind of investor. Over the course of the past year, long term debt nearly doubled to more than $34 billion. In fact, total liabilities did more than double to $48.8 billion. While total assets also grew wildly from $50 billion to $72 billion, a fully cognizant investor would also take notice that the line labeled as "goodwill" grew from $26 billion to $36 billion. So, some of that growth is not precisely measurable in real terms.

If this firm is setting up to do better, keep in mind that this bodes well relatively speaking for the firms that sell mobile hardware such as Apple (AAPL) , and Samsung. There is a lot here to consider. Traders should also consider that even though there is not a ton of short interest in the name that there will be a short squeeze type impact this morning created by those impacted as risk managers force some covering purchases. 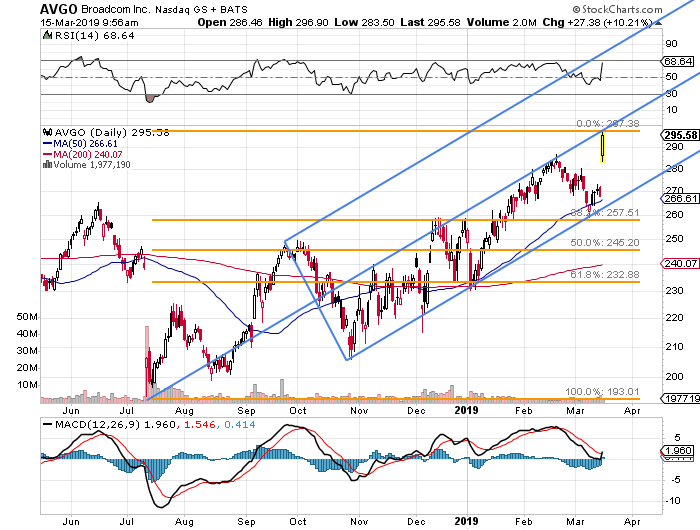 Please notice that the highs attained just after the opening come very close to smashing through the central trend line of our Pitchfork model. This may be the spot for day traders to try a limited short. That trader would need to cover before the closing bell tonight just to avoid increased risk over the weekend.

The greatest threat to such an idea would be the cycle of upgrades and increased price targets that have already begun. We have already heard from Barclays, Credit Suisse, and Deutsche Bank. There will be more. Be careful. There will be a better day to get long.

My thought is that a revenue seeker might get away with selling a $270 June put for roughly $8. Just know what you are signing up for.