Stocks are already off to a decent start. Putin warned that his hostile posture was no bluff. Investors are either calling that bluff, or simply have a low opinion on Russian military capabilities. Regardless, Energy and Industrials are early leaders and of course Defense and Aerospace names are leading the Industrials. Sarge faves like Lockheed Martin (LMT) , Northrop Grumman (NOC) , and General Dynamics (GD) are leading the way. Raytheon (RTX) is also hot. Currently your pal is flat that name.

Over the past week or so, Treasury yields have spiked. The US Ten Year Note now pays more than 3.54%, up from 3.41% five business days ago. The US Two Year Note pays 3.97% this morning, up from 3.78% a week ago. The yield curve, while still badly mangled, is less inverted in key spots than it was just two days ago.

This makes the banks interesting to investors and traders like myself. I see myself as both. While a contracting economy is awful for financials, less badly inverted spreads are a positive. While rising rates tend to steepen the curve, and makes individual loans mortgages far more profitable for bankers, this also weakens demand for credit and makes the extension of credit a more dangerous game.

For some time now, I have passed on the investment bankers, and the big-time traders. I have stuck in this space with the national banks that I feel benefit most in an environment more heavily reliant on the means of traditional banking as a driver than on all the high-margin "boutique" type businesses.

That's why I have made a stand in both Wells Fargo (WFC) and Bank of America (BAC) despite the various warts that might be visible or the obvious tertiary place in a number of businesses nationally. This idea is outside of, and separate from those two "longs." They are both down "small" in this morning's early going as are the bankers more broadly.

Bear in mind that the CEOs of the nation's seven largest banks will testify before the House Financial Services Committee this morning as well as the Senate Banking Committee tomorrow. Such topics as ESG-related issues, regulation, consumer banking and the evolution of Fin-tech are sure to come up.

There is risk around events like this, but more often than not, the banking CEOs end up fielding unevolved questions from legislators that are in way beyond their depth. Both BAC CEO Brian Moynihan and Wells Fargo CEO Charles Scharf are among the seven. 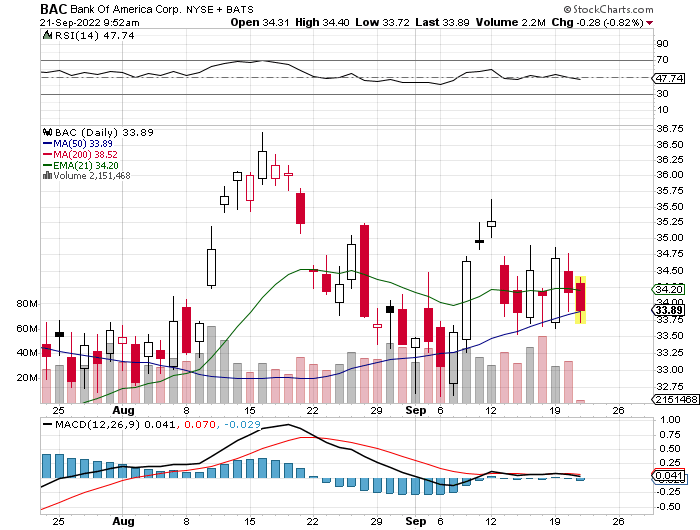 Readers will see readings for Relative Strength and the daily MACD that are quite neutral. BAC has, for five sessions in a row, found support at its 50 day SMA (that is trending higher), but has had trouble holding onto its 21 day EMA.

I intend to grab some BAC at or even below the 50 day line, (the line has been pierced daily) with the intention of holding these shares (outside of my investment) very short-term. By that I mean into this afternoon, maybe into the after hours session if it's working.

What I am really aiming for is a small profit on a trade. Nothing more, nothing less. Know your objective. Medium size. Target entry? $33.75-ish, Target exit? $34.25-ish. I'm not going for the kill here. Just trying to hit a single, but I'll take a double if I get my pitch, on Fed Day.

Panic? Nope. If wrong, I can just add it to my long-term holdings. For those without an investment in the name, I wouldn't take a loss of any more than $0.30 to $0.40 on this one.

Get an email alert each time I write an article for Real Money. Click the "+Follow" next to my byline to this article.
TAGS: Federal Reserve | Investing | Markets | Stocks | Technical Analysis | Trading | Banking