I had just come off live television. All my ducks were in a row. Kind of. I thought. Hanging out (electronically) with one of my trader pals on Twitter. The closing bell finally rang. I knew she was long Amazon (AMZN) . I had not been nearly so bold, having taken a very pedestrian profit on a small long last week, I sat out these earnings.

Radio silence. Then... Holy Moly. Not only was Amazon up six figures in U.S. dollars in a matter of seconds, the firm reached a $1 trillion market cap, and proceeded to pile on more gains leading up to the conference call. I'm a trader by occupation. I managed to earn what on another day might look like a handsome return on a pre-call short position that I covered prior to the AMZN close, but hats off to my trader pal, and hats off to all of you folks who some how knew to "own this one, and not trade it". Salute.

For the firm's fourth quarter, Amazon reported EPS of $6.47. The year over year earnings growth of 7% would not amaze, relative to Amazon's not so recent past. The fact that Wall Street was down around $4 on this measure... that's incredible. Why were they so far off? I'm a Wall Street guy. Perhaps they saw the same possibility for more pressured margins as the firm ramped up short-term delivery services that I erroneously saw.

As for revenue, you have to just love this. The print hit the tape at $87.44 billion, up 20.8% from a year ago, which is in-line growth for Amazon. The number beat expectations by $1.35 billion. How many firms in my portfolio don't even do $1.35 billion in sales over three months? I'm not going to look, but the size of the beat is truly impressive.

Now, perhaps even more impressive than a revenue beat, might the 10% growth in net income to $3.3 billion. This is despite the fact that we all know that the firm was spending heavily in order to speed up delivery for Prime members over the holiday season. Expectations for net income were for less than $2 billion. On that delivery, by the way... the firm says that its deliveries to Prime members increased fourfold from the comparable 2018 period. Four times!

I mentioned yesterday that Microsoft (MSFT) was a firm executing at a high level across just about every single business line. Well, now there are two. For Amazon, as North American sales print up 22%, and international sales grow 14%, the implication would be that unlike some of the firms FANG peers such as Facebook (FB) and Netflix (NFLX) , Amazon's businesses are not yet that mature. Let's look under the hood.

Online Stores remains the firm's largest contributor by far in terms of revenue. This line generated $45.7 billion in sales, up 15%, slightly beating expectations. Bear in mind that the firm has no intention to slow down the spending associated with this business, and global shipping costs did rise some 43%. Wall Street did not get everything wrong.

In a related business, Third Party Seller Services printed $17.4 billion in revenue, +30% y/y, and better than consensus. Though not the largest unit, perhaps the most closely watched is Amazon Web Services (AWS), especially after the incredible 62% growth posted by Microsoft's Azure. AWS did manage to come through impressively however. The unit printed $9.95 billion in sales, +34%, which is more or less in line with recent quarters. Of interest here will be both the progress made by Alphabet's (GOOGL) Google Cloud (they report next week), and the obvious direction that IBM (IBM) is now taking as a cloud focused leadership team takes the helm in April.

Moving on to "smaller" business lines, Subscription Services grew 32% to $5.2 billion. This unit would include Prime membership (now 150 million strong), Audible (audio-books), E-Books (Kindle), Amazon Music, and Amazon Video. Pretty sure that at least someone in my household subscribes to each and every one of these services. What the firm refers to as Other, which includes the wildly successful advertising business put impressive growth of 41% to $4.8 billion to the tape. If there is a blemish, it would be in Physical Stores (including Whole Foods, but not Whole Foods delivery), where the $4.4 billion generated amounts to a 1% decline in sales. 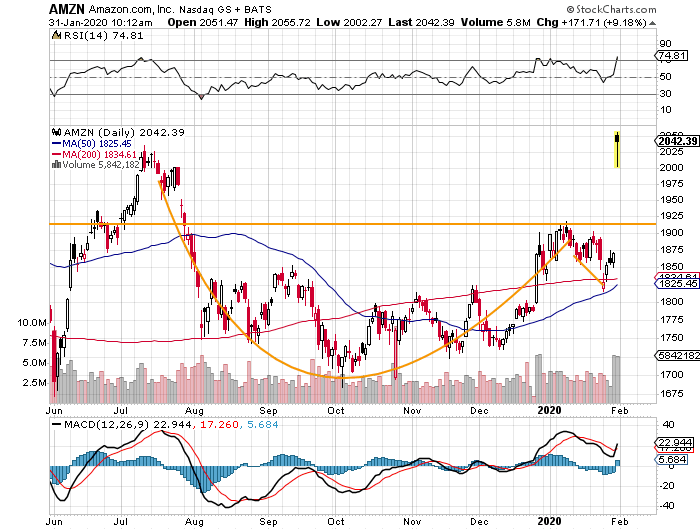 What you have here, and I apologize for not recognizing this earlier, is now easier to see as a cup with handle pattern, or probably given the rounded and somewhat rounded bottom, more accurately a saucer with handle. The pivot is the peak on the right side of the cup/saucer of $1920. Should this break-out hold, the target would be a rough $2300. No joke. Could actually be $2400. To that point, I have noticed 17 four or five star (according to TipRanks) analysts opine on Amazon just this morning. The average target price for these 17 highly rated analysts is $2487.

Am I Going To Buy Amazon?

(Amazon, Microsoft, Facebook and Alphabet are holdings in Jim Cramer's Action Alerts PLUS member club. Want to be alerted before Jim Cramer buys or sells these stocks? Learn more now.)