Goodbye to you. It's been a long-term relationship. Mostly beneficial. Even this year. Even last year, BP PLC (BP) did not hurt my book. I had been behind big oil, and big dividends for a good while. There were some excellent trades, though not recently. Some of the other names left my book quietly, heads down. BP, however, had been especially easy to manage in both terms of risk and net basis, which are really the same sport when one comes down to it. This is why, even after I had decided after I was done with the group, that after taking profits in this name (and losses in ExxonMobil (XOM) and Chevron (CVX) ) that I allowed a small position in BP to persist. Heck, the stock is not volatile, they had mentioned a commitment to expanding exposure to renewable energy in the past... and they paid you to hang around. From now on, by the way... they'll pay you less.

Very early Tuesday morning, from abroad, BP PLC reported adjusted Q2 EPS of -$1.98. That number missed the street by about $1.40. Remove the adjustment, and GAAP EPS landed at an astonishing -$5.00. Astonishing because that was better than expected. The revenue story is downright awful. For the quarter the firm posted $31.19 billion. This number missed the mark by a rough $7.5 billion, and was "good enough" for a year over year earnings decline of 57.7%. Production on the whole landed -3.8%, while "Upstream Production" hit the skids badly, as refinery utilization took a more than 10% beating as both OPEC+ restrictions and a forced reduction in demand due to the global pandemic left their marks.

The firm is still committed to a greener future, it appears. BP announced that within 10 years, the firm plans to raise its annual low carbon investment to roughly $5 billion per year. That's a positive. What's not positive is the size of the quarterly loss in dollar terms. Total net loss came to -$16.8 billion. This includes both a $9.2 billion impairment charge at least partially due to a drastic reduction made to the firm's multi-decade outlook for underlying commodity prices. The number also includes $1.7 billion in exploration write-downs that were at least partially offset by exceptional results from the trading of commodity related products that showed a "profit" of more than $1 billion.

Royal Dutch Shell (RDS.A) turned the trick last week. Today it was my old friend, BP. The firm halved the dividend to a quarterly $0.315 per American Depository Share from $0.63. The forward looking yield based on Monday night's closing price of $22.09 would still be a quite gaudy 5.7%. Almost enough to keep me around. This quarter's dividend will be paid out on September 25th to shareholders of record on August 14th. The firm, in the statement, indicated that it plans to keep the dividend at this level, and then return at least 60% to shareholders through BP's repurchase program.

While these may seem like reasons to stick around I am done. 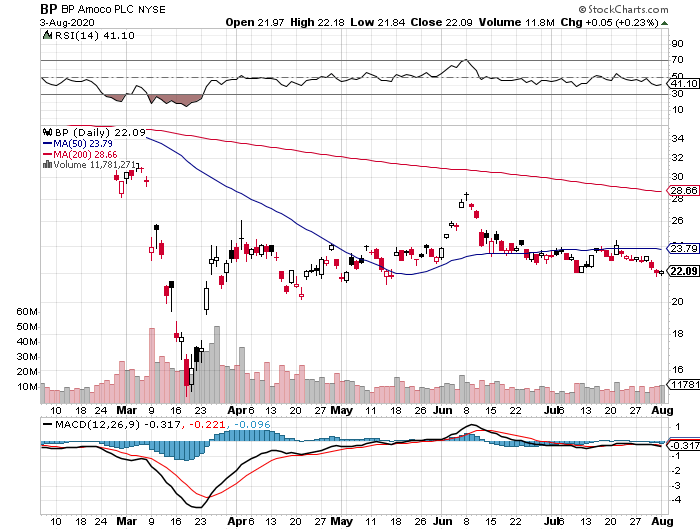 Facts are facts, and this fact is mine. I will take my dividend this morning. I only need a handle in the upper $22's to get out of the entire position, which was once large at a profit. I get a $23 tag after this morning's opening bell? I am outta here, and at that point I am out of direct exposure to energy. Sold to you, take badge 986.