Love Freeport-McMoRan (FCX) . Truth be told, I am currently long this name. I have been long this name on and off, mostly on, since the shares traded in the low teens, in dollar terms. That said, I took profits many times, expertly executing my outs at my self-imposed target prices. Mostly, as a trader, I got a little too picky (greedy?) on picking spots for re-entry, and ended up chasing my way back into the name. Long time readers know how much professional traders love to chase shares higher after already being correct on the original call (or really ever).

The shares were trading above $45.50 (+3.4%-ish) early on Monday morning. This is not the highest that Freeport-McMoRan has ever traded. The shares traded higher in 2011 which is kind of funny. Funny, because Copper trading on the London Metals Exchange traded as high as $10,747 per metric ton earlier this (Monday) morning, after besting the previous record high of $10,190 per metric ton (which was set in 2011) on Friday.

As recently as mid-April, Goldman Sachs had predicted that copper prices in London would hit $15K/ton by the year 2025. Today, copper prices are kind of riding the coattails of iron ore futures as increased demand out of China (but just China) becomes identified. Copper though has been a leader throughout this bull rally in commodities broadly and industrial metals more specifically.

Personally, I would not expect this to let up much as the world not only tries to re-open, but also tries to do so in an environmentally friendly way. I think, and I could be wrong, with a nasty turn in the disease or a stutter in the global recovery, but I think that increased demand for these materials is still in the early innings... of the first game... of a double header.

Freeport reported the firm's first quarter financial performance almost a month ago. The firm posted adjusted EPS of $0.51, which was a narrow beat of consensus view, while revenue generation of $4.85 billion missed narrowly but was still good enough for annual growth of 73.2%. During the quarter, the firm's copper production popped 24% to 910 million pounds, with sales growing 13% to 825 million pounds.

For the current quarter, FCX sees copper sales volume of 975 million pounds in addition to gold sales of 330K ounces. For the full year, FCX has upped its copper sales volume forecast to 3.85 billion pounds (from 3.8 billion), also expecting net copper cash costs to rise to $1.33 per pound versus prior guidance of $1.25/pound. The firm left alone guidance of $2.3 billion-ish in capital spending for the year that would include $1.4 billion for major projects associated with underground development activities in the Grasberg minerals district in Indonesia. The share price did wobble a little in response to the increased expected all-in costs associated with copper production before resuming the "uptrend" within a few days.

The stock has outrun most of the Wall Street analysts that follow this name. Chris LaFemina, a highly rated analyst working for Jefferies, rates the name as a "Buy" with a $55 price target and has referred to FCX as a "top pick." Beyond LaFemina however, Wall Street is absolutely littered with four and five star analysts (at TipRanks) who still rate FCX as a "buy", but also still have lower (in some cases, much lower) price targets on the stock. Asleep at the wheel, much? Note to Wall Street, when a stock overruns your price target, you either change your price target, or your rating. There is no hiding until you know more. Everyone wears their big boy/girl pants in this league, or they're supposed to. 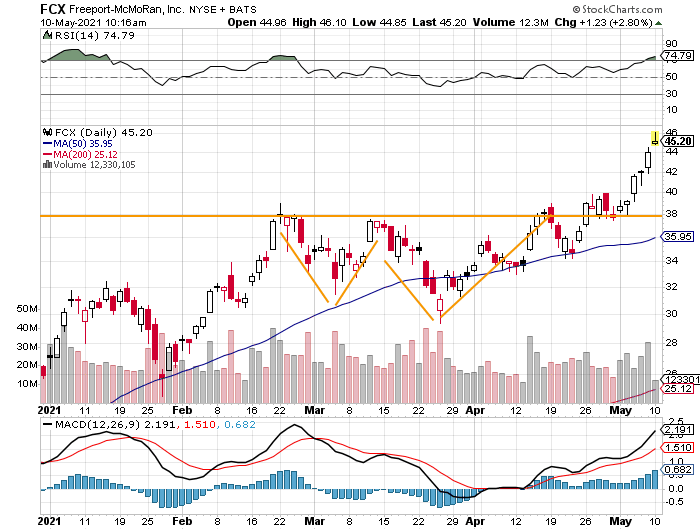 I am still working off of the double bottom pattern that at the time had formed at the top of the chart. The pivot would of course still be placed at the $38 level. Remember, that I almost always place my first target price at 20% to 25% above pivot. (It's not like I invented this, a lot of Wall Street folks do this.) Were I to stick to 20%, which is what I do at higher priced, more volatile stocks, my price target would be $46. We got here too quickly however. I probably should stick to 20%, because the RSI does reflect a technically "overbought" condition and the daily MACD looks like one of Evel Knievel's ramps.

That said, I am sick of getting shaken out of this name when I am right. I am going to target a 25% move off of pivot. So, the target price is going to be $48, but in no way do I sell everything there. I will see the rising 50 day SMA as support and a break of that thin blue line as my moving panic point.

Get an email alert each time I write an article for Real Money. Click the "+Follow" next to my byline to this article.
TAGS: Investing | Markets | Stocks | Technical Analysis | Trading | Metals & Mining | Analyst Actions