As we're seeing mini-rotations and pauses among the hot sectors and the momentum names within them, I'm coming back around to LiDAR related names. They haven't seen that huge second surge like we've witnessed with EVs, SPACs, and cannabis names. LiDAR is going to be a huge part of autonomous vehicles, drones, and smart cities. If the market continues to work in this momentum chasing rotational pattern, we should see a return soon.

Three names top my list for plays in this area: Velodyne Lidar (VLDR) , Luminar Technologies (LAZR) , and Collective Growth Crop (CGRO) . The last name on the list is a SPAC in the process of buying Innoviz Technologies. Ironically, VLDR and LAZR came public via SPACs as well.

I think CGRO would be my first choice here based on price and the fact it still exists in the price range where a pre-merger squeeze could occur. We've seen that so many times with SPACs over the past year. Float is still tight, options are available to trade, and we still aren't finished with the merger. The stock has been consolidating since the big December push higher. This isn't a cup and handle but more of a rounding consolidation. Cup and handles are continuation moves; however, the recent pullback is too large to qualify as such. We do have the bullish crossover in the MACD and parabolic stop-and-reverse (PSAR). Unfortunately, we don't have a price breakout or bullish flip in the Full Stochastics indicators. I want one of those two before establishing a full position. Price closing over $14.50 would be very bullish here. Short-term upside is $16 with a possibility to continue back to all-time highs. 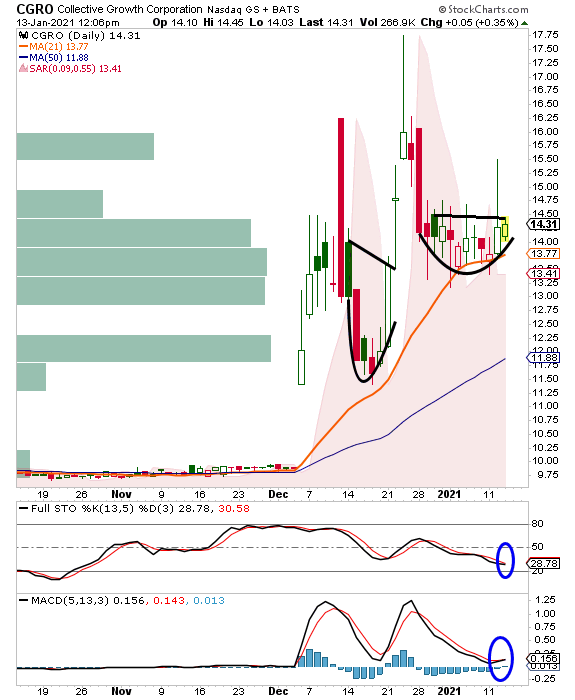 LAZR has reached its tipping point. The period of consolidation should end this week. Do we break higher or lower? A close under $31.15 breaks the stock. At the very least, it puts it in a position of great risk. A close over $33 puts us on a path to $38. Secondary indicators are mixed. Again, a tipping point. The next price action should cement a direction. If anything, this would make a tremendous long volatility option for the next two weeks; however, the straddle is pricing a 21.5% move already! I believe we'll resolve higher. 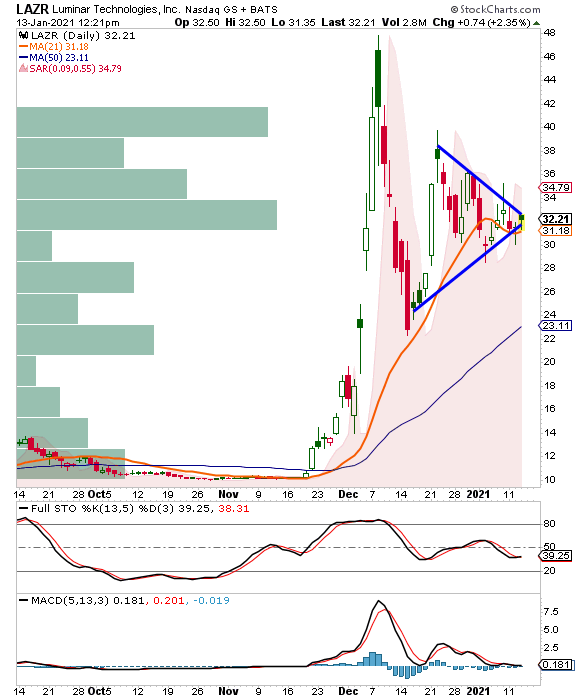 Last up is VLDR. The price pattern is similar to LAZR; however, VLDR is hugging support with resistance some $2 higher. Secondary indicators also tilt bearish here more than bullish. A close under $22.50 would be a yellow flag, while anything under $22 might send bulls fleeing. Should we break below, I think we'll head for the $19s to find support. Of the three, I'm least excited here. Perhaps if we get a turn in the MACD, I might be more interested. 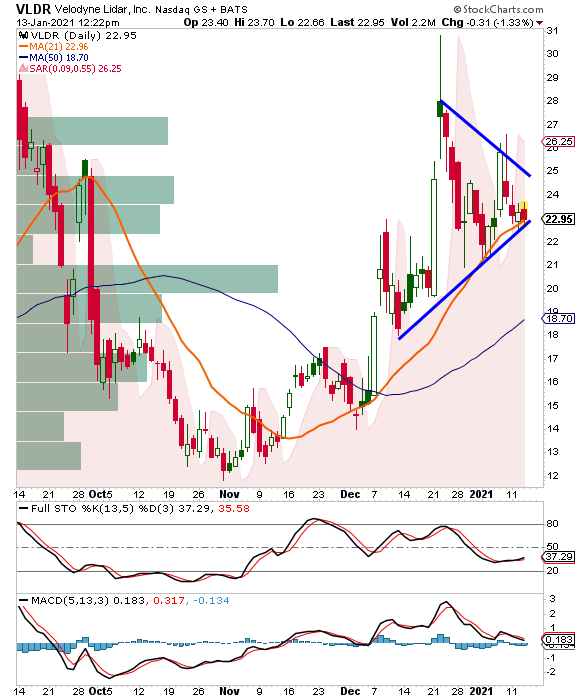 I ordered these in area of preference. I now hold a position in CGRO. I'll considered adding LAZR based on the outline below. At this point, it would take a bit to get me into VLDR though, especially when I can gain exposure to the sector with the better charts of that other two. That being said, I do find VLDR attractive fundamentally as a long-term buy and hold, so don't mistake this analysis as bearish on the company specifically. My short-term ranking is 100% based on the technical setup.

Get an email alert each time I write an article for Real Money. Click the "+Follow" next to my byline to this article.
TAGS: Investing | Stocks | Technical Analysis | Trading | Software & Services | Cannabis