Twitter (TWTR) bulls are enjoying a solid run on Thursday after the company released earnings. The 16% move higher is a nice reprieve from last quarter's 21% beating. Big moves are nothing new to the stock. More than half of the reports over the past 18 months have resulted in double-digit single-day moves, while the other two came up just shy but still saw intraday double-digit moves. In fact, only once over the past three years has the stock experienced an intraday maximum move of less than 10%. I'm kicking myself for not buying volatility pre-earnings on this one given it was only pricing in a move around 10% by tomorrow. Of course, hindsight is 20/20.

I don't know if I'd expect the volatility to remain though. The five-week postmortem earnings action saw the stock only move a few percentage points from the initial post-earnings close (which would be today). Those are two fixed points in time, so it's important to note the stock has seen larger moves within the time frame, but that means buying volatility at the close today with a March monthly expiration will likely require active management to catch a profit if history is any guide.

Despite missing earnings per share estimates of $0.29 and guiding first quarter revenue lower, Wall Street rewarded the stock today. If this tells us anything, it's Twitter is all about the mDAUs (monetizable daily active users). As long as those number exceed expectations, investors will be happy.

As we head into 2020, expenses are going to push higher. The company plans to increase headcount 20% and build new data servers. That's going to weigh on operating income and the bottom line. Again, as long as the focus is on mDAU growth and this adds more users, it shouldn't drag on the stock price.

With the 2020 presidential election as well as the Olympics in 2020, Twitter has an opportunity to rapidly increase engagement, but after banning political ads the big question is whether they can monetize these events.

I was a bit surprised I did not see much in the way of analyst upgrades, downgrades, or price target changes this morning. I would expect to see some tomorrow morning which could have an additional impact on the stock. If we run too much today, which to me would be a close in the $40 to $41 range, then I expect some analysts might be a bit timid to upgrade the stock after the move.

Based on the technical picture, this breakout fills that October gap. I suspect we'll develop a new trading range in the blue box I've drawn on the chart. That puts us with an upside target of $42, a downside support of $34 with the $37 level acting as the strongest support. That was the previous resistance on the stock. Shares have struggled when the Full Stochatics touched or punched through 80, so keep an eye on that. 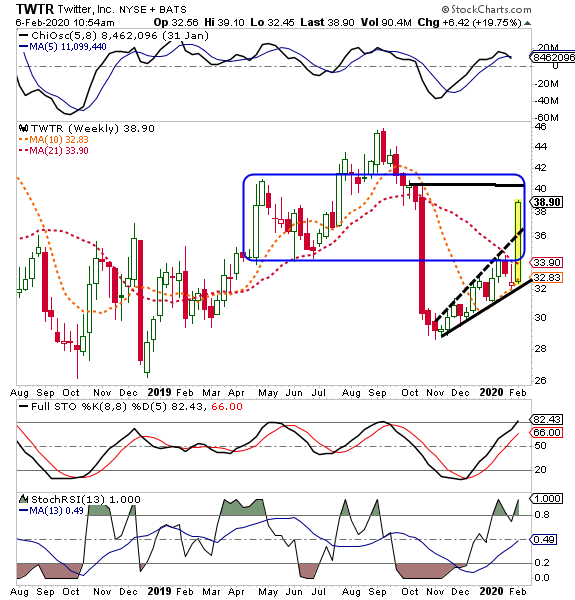 I'm certainly in no hurry to short this one, especially since just a few weeks ago I liked the idea of a long around $34 as I wrote on January 17th. If you weren't long coming into the day, I would eye a small pullback to the $36-37 area before getting involved. I might consider selling at-the-money puts or a bullish put spread as well. If I did own it, then I would not sell, but rather you have a trailing stop of 2% to 4% on the stock.

Get an email alert each time I write an article for Real Money. Click the "+Follow" next to my byline to this article.
TAGS: Earnings | Investing | Options | Stocks | Technical Analysis | Trading | Media