American Eagle Outfitters (AEO) reported the firm's second quarter financial performance on Thursday morning. The firm posted adjusted EPS of $0.60, which was a beat... and GAAP EPS of $0.58, which was a miss. Revenue generation for the period tallied $1.19 billion, good for annual growth of 34.7%, but also a slight miss. There is a lot to like in these earnings. I think maybe investors had such high hopes for a strong "back to school" season and thanks to the resurgence of the pandemic, that season has perhaps become, if not muted, at least more stretched out. I mean, $1.19 billion is a record second quarter for the firm, and that revenue did produce operating income of $168 million, also a record. So, let's dig in and see what we can see. Shall we?

American Eagle has two major reporting business brands, and lumps smaller brands such as Todd Snyder and others into a category labeled as Corporate... that last one.. that's where the pain is.

The largest, American Eagle sells trendy casualwear, shoes and accessories. The brand is America's number one seller of jeans for teens to 20-somethings and for women of all ages. American Eagle contributed $845.9 million toward that $1.19 billion whole. This $845.9 million produced $198.9 million in operating income. Wait, Sarge... the whole firm only produced $168 million in operating income. Hmm, very good, you're on the ball. I'll explain.

The smaller, but still very important brand, Aerie sells athleisure wear, swimwear, lingerie, and loungewear. Aerie made sales of $335.8 million, producing operating income of $70.6 million. Both units are doing well. The namesake brand produced a 23.5% operating margin, while Aerie ran at an operating margin of 21%. Now, Corporate is another story. This "kitchen sink" reporting segment contributed sales of just $12.5 million, while ringing up an operating loss of $101.5 million, In fact, capital expenditures for "Corporate" were higher than was revenue derived.

Another problem, at least for the keyword reading algorithms that have more to do with modern price discovery than do thoughtful investors missing both demand and supply at key levels was this. Consolidated store revenue increased 73% from Q2 2020 as a year ago, the economy was shuttered, and a year later, the economy had reopened and more transmissible variants of COVID had not yet impacted that reopening behavior. However, this means that digital sales decreased 5% from a year earlier. Algos hate decelerating or contracting e-commerce numbers. It matters not to momentum chasing (and creating) algo traders that versus Q2 2019, total store revenue was up 4%, and digital sales were 66% higher.

American Eagle net cash position, including short-term investments, was down small half way through the year from six months earlier. Inventories are up. In all, current assets are slightly higher. The firm left the entry for goodwill where it was. Total assets are in line with the six months ago number.

Operating lease liabilities are noticeably lower, as are current liabilities in general. Current assets more than double current liabilities. Long-term debt is only slightly higher. (Don't forget that the firm repaid $200 million to its revolving credit facility in late 2020.) Total assets dwarf total liabilities less equity. The balance sheet is in better shape than one might have expected had they not paid attention for a year. The firm's current ratio is nowhere near levels that draw my concern.

The stock is certainly not expensive, trading at 14 times forward looking earnings, and just 1.3 times sales and 4.6 times book. The firm reinstated the dividend in late 2020, and increased the quarterly payout to $0.18 earlier this summer, now yielding more than 1.5%. My inner value investor is inclined to initiate a long position on this morning's dip, but not increase my allocation toward the retailers. I have three longs across the space right now, not counting Amazon (AMZN) ... Dollar General (DG) , Walmart (WMT) , and Home Depot (HD) . Right now, I really, really like Walmart, and Home Depot will benefit from all of these storms. Dollar General has been the most profitable position of the three, but has stalled of late, and has had trouble retaking its 50 day SMA. I probably draw from DG and HD without completely exiting either. 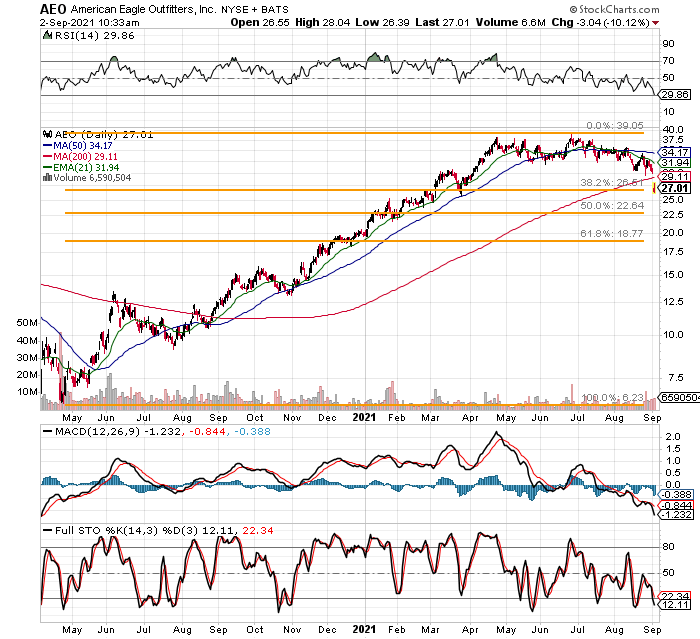 The Full Stochastics Oscillator, RSI, and daily MACD all agree. Traders, algorithmic or not have sold the snot out of this stock. See that Fibonacci model overlaid on the April 2020 low through the heights of the 2021 basing pattern. A 38.2% retracement of that entire move is whispering in my ear. It says... "Buy some here, Sarge, buy some here."

That's exactly what I am going to do...

Note: Trader is hoping to be called away at $30 in January for a net profit of 20.5%. Traders could sell a put in order to further decrease net basis, but that would also increase equity risk at a discount. Here, the risk is defined.