FUBO reported the firm's first quarter financial performance on Tuesday afternoon. While FUBO remains a long way from approaching profitability, revenue generation is exploding to the upside. Let's explore. After a quarter where FUBO posted adjusted EPS of $-0.55, and GAAP EPS of $-0.59 (Both metrics missed Wall Street's expectation) on revenue of $119.72 million. That sales number was not only a beat, but good for year over year growth of 134.7%. Yeah, that's a lot more than a double.

From the press release, CEO and co-founder David Gandler said, "The first quarter was an inflection point for fuboTV." Gandler went on... "For the first time in any first quarter, we reported sequential revenue and subscriber growth, despite past seasonality trends. This tells us that consumers are increasingly cutting the cord."

Doing the simple math, we come up with a Net Profit/Loss of $-70 million. That's "growth" of 5% of its own (I'm sure that growth is the wrong word.) from the $-66.6 million posted for the one year ago period. Adjusted EBITDA Margin improved to -38.8% from -72.3% a year ago, and -133.4% two years ago. While some of the numbers are truly grotesque, the upward momentum is undeniable.

Executive Chair Edgar Bronfman had this to say: "As the shift of viewing from traditional pay TV accelerates, our differentiation in the marketplace - sports-focused programming, a tech-first and data driven user experience and the planned integration of wagering and interactivity - firmly positions the company strongly for long-term growth."

I love this growth. I am not crazy about the losses, but the firm seems well positioned to sustain them if necessary for the present into the medium-term futures. The largest changes made to the balance sheet that I see are a large increase in available cash and subsequently current assets that nearly pairs off with a similar rise in longer-term (so, not current) convertible notes. The entry for goodwill, though not tremendously larger sequentially from last quarter, seems a little on the large side for my liking, but that is opinion and I am admittedly something of a dinosaur when it comes to balance sheet management.

The stock is investible as long as the investor understands that there is clearly an element of speculation to making that choice. I would, however, if interested, not buy the shares today (Wednesday) with the stock price up 17% really on the guidance, and most of the rest of the equity marketplace trading in the hole due to April CPI data that came in above elevated expectations. 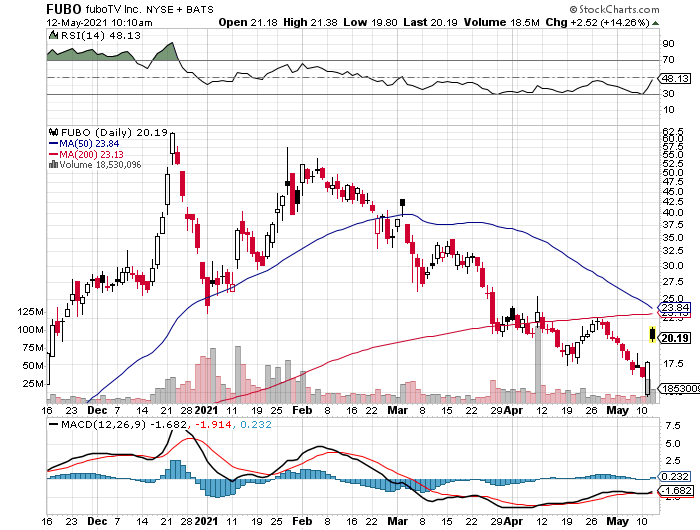 See the gap created overnight? Even with the gap, and even if gaps did not usually fill, current price levels are drawing that 50 day SMA of $23.84 lower faster than it can pull down the 200 day SMA, currently at $23.13.

Basically, I am telling you that this stock is like it or not, probably headed for a "death cross" which can cause a negative algorithmic reaction. That's why someone who likes this stock either waits, or writes a discounted put (as long as one wants to buy at least 100 shares) in order to get paid to wait. You can still get paid $2.90 for the August $17.50 puts. That puts the equity risk at $14.60. Heck, I may do that myself. That doesn't sound too bad.

Get an email alert each time I write an article for Real Money. Click the "+Follow" next to my byline to this article.
TAGS: Investing | Earnings | Stocks | Technical Analysis | Trading | Media | Movies