It's been a rough month. Especially for Cisco Systems (CSCO) . Over the past 30 days, as of Wednesday's closing bell, the S&P 500 (-2.7%) had performed poorly, the "more exposed to tech" Nasdaq Composite (-3.3%) had done worse, and Cisco at -6.4%, well that speaks for itself. Before we dig in, I like CSCO, I am long CSCO, and I believe in CSCO CEO Chuck Robbins. So there, that's out there.

Early on Thursday morning, Cisco was downgraded at Goldman Sachs from "buy" to "neutral", as that firm lowered their price target from $56 to $48. Goldman analyst Rod Hall (4 stars out of 5 at TipRanks) expressed concern over future spending in telecom over the near term. He sees this trend extending well into 2020 as carriers slow down their own spending habits going into the "5G" era. Hall does not like the multiple here, despite the fact that these shares now trade at roughly 12 times forward looking earnings. I see his concern as valid, yet I am more prone I think to add on weakness. Let's move on.

Who Is On My Side?

Earlier this week, Evercore ISI analyst Amit Daryanani (5 stars), and who seems to me to have a pretty good track record in this name, sung a different tune. Daryanani reiterated his "outperform" rating, as well as his $60 price target on Monday. He also made a case for the possibility of pricing up around $80 over time. He expresses many of the reasons that I am already in the name for his rationale. Daryarnani illustrates potential for growth in core networking markets, and most importantly... increased exposure to business lines that model recurring revenue as a driver. Think software, think cyber security. Drayanani wrote at the time, "We think CSCO remains an attractive asset to own given the company's positioning in a growing and profitable product market, increasing software/services mix, M&A tailwind, and a favorable shareholder return profile."

Regular readers know that I had been an early adopter to all things "cloud", all things "subscription-based." In fact, I am far past peak exposure to these businesses. I have cut back, and even reinvested in a number of names as the broader marketplace turned from growth. That said, though CSCO has tried to transition into a growth name, the stock remains a value play, still somewhat reliant upon the legacy router, and switches business.

In fact, going back to fiscal fourth quarter earnings that were reported in mid-August, the firm did in fact guide Q1 EPS and revenue below consensus. That said, peering into the numbers posted that day, while "infrastructure platforms" still comprised 58% of total sales, growth for that segment amounted to just 6%. Applications sales contributed just 11% to the aggregate, but at an 11% growth rate, while Security contributed 5.3% at growth of 14%. The shift is in motion, and perhaps (maybe hopefully) the pricing is right for the (this) investor.

While cash flow decreased 4% for Q4, the number was still $3.9 billion. At that time, CSCO ran with a cash position plus investments of more than $34 billion, easily outweighing combined short and long-term debt of roughly $24.5 billion. That leaves the current ratio at 1.5, and sans inventories, the quick ratio at 1.4. In plain English, CSCO can pay their bills while providing enough cash flow to proceed with the already in progress transition, while maintaining both the share repurchase program and the annual dividend of $1.40 (3% yield). 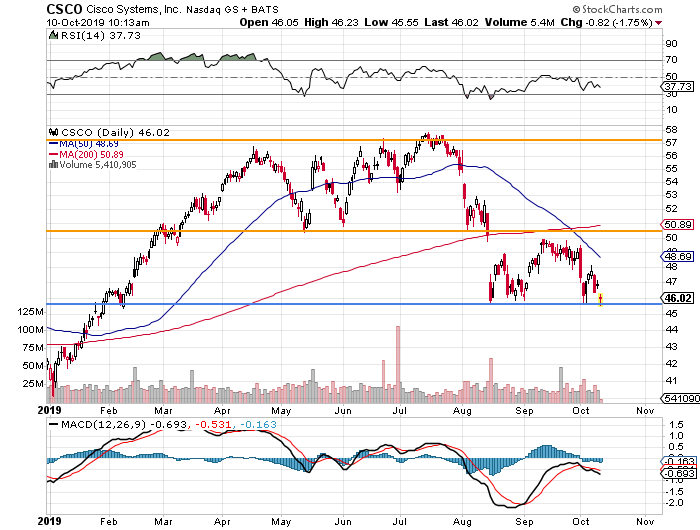 The first thing that I see is the flat base that ran from March through that August earnings release. Upon that break, a new basing pattern has now formed with former support as resistance, and new support now under pressure for an incredible fourth attempt by the sellers. This most recent pressure had been telegraphed by a late September "death cross."

Zooming out just a little, investors can also see that current support also lines up at approximately a 61.8% Fibonacci retracement of the December lows through the 2019 highs. A worst case scenario for me would be a 100% retracement all the way back to the $39 level. For those about to ask, those Q1 earnings are due on November 13th.

Notes: Should the shares move higher, the investor has capped the sale price next month at $47.50, a profit of 7.6%. Already long? Good. CSCO is set to pay you a $0.35 dividend in two weeks. I am not working that into the math however as the date of record has already passed. Worst case? The shares sell off even harder. Then this trader will end up long 200 shares at expiration with a net basis of $43.33, with shares obviously trading below $42.50.

P.S.: I look at CSCO as an investment, not a trade. Can I guarantee this idea makes you money? Of course not. What I can guarantee is that if this one smacks you in the teeth, that I will be in that foxhole with you.

Get an email alert each time I write an article for Real Money. Click the "+Follow" next to my byline to this article.
TAGS: Investing | Options | Stocks | Technical Analysis | Trading | Value Investing | Technology