Today is Black Friday. It will really feel more like Cyber Monday. The stores and malls will not see the crowds that they once did, due to first a changed culture for holiday shopping, and two... most folks are smart enough to avoid crowds entering the latter part of 2020. While this change obviously will translate into an incredible season for the likes of Amazon (AMZN) , Walmart (WMT) , Target (TGT) , and Costco (COST) , the evolution will also pressure the delivery services industry. Typically, these firms struggle to keep up. Amazon handles a significant portion of its own delivery. They still rely upon United Parcel Service (UPS) , FedEx (FDX) , and the United States Postal Service as do the other "big three" as well as do a plethora of small to medium-sized retailers now struggling just to meet expenses.

Consumers have been told to shop earlier if they can, as holiday delivery services are expected to fall behind earlier this year as more humans are less willing to enter physical store fronts this year. Now, if say... the first vaccine, or first vaccines produced namely by Pfizer (PFE) and Moderna (MRNA) receive "Emergency Use Authorizations" during the holiday season, their resources will be stressed further, as saving lives has to be prioritized over some cool present or toy for a family member. Folks, this is going to get nuts, and you just might end up exchanging presents when they "get there" and not on a specific date.

Well, you do what you want, but to me it means that you want to be long either United Parcel Service or FedEx. Maybe both. There are a number of pros. The surge in demand... from e-commerce, and from the U.S. government drives not only sales but should drive margin as well.

That may be difficult to understand as large deliveries to retails locations, typically a higher margin business, probably decrease as "last mile" deliveries, which are lower margin increase - but this is a demand story - and when in demand, the supplier has the pricing power.

Are these passing trends that can not be counted on? Certainly, humans will return to brick and mortar retail. While there will always be a need to seek the "impulse or emergency" purchase, there will never be in my opinion, a return to what once was. Folks will not only purchase the routine on-line, but they will likely subscribe to them, creating recurring revenue for the seller, as well as for delivery. That means you will eventually end up subscribing to things like dog food, toothpaste, and bananas. Yes, bananas.

UPS has been trading in a range since early August. The pivot remains almost $10 higher at $178. 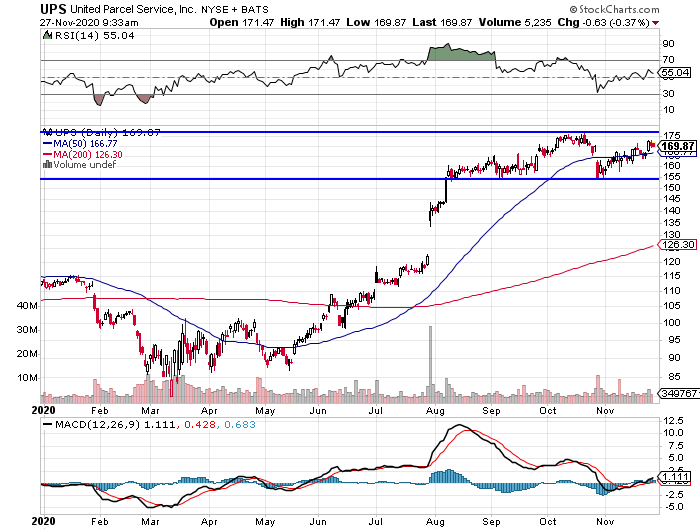 FedEx had formed a double bottom close to the top of the chart, now trading very close to pivot, actually is currently mired in a breakout attempt as I write. Keep in mind that UPS reported in late October. They crushed expectations without offering guidance. FDX reports in mid-December. 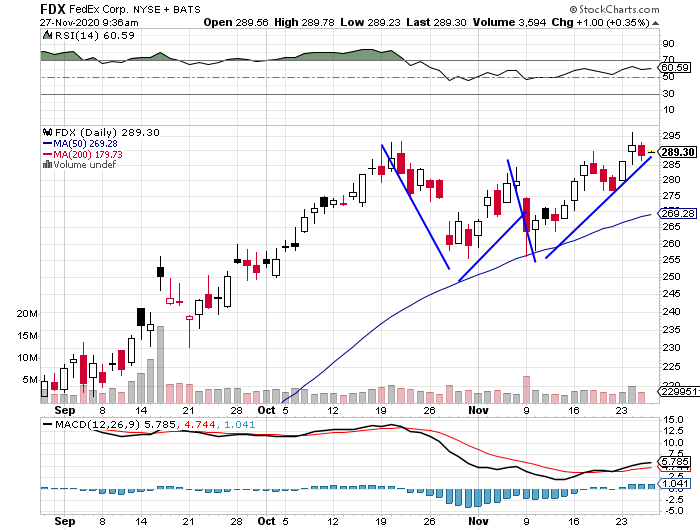 I think both stocks go higher. I like UPS more, and I am about to tell you why. First, both stocks trade at 19 times projected forward looking earnings. Digging deeper, we see that UPS runs with an operating margin of 7.5%, while FDX does so with an operating margin of 4.7%. UPS tops FDX to a significant degree in the ability to provide both operating cash flow and levered cash flow. In fact, at last glance, I believe FDX threw a negative number through that hoop. Hey, do these firms pay shareholders just to stick around? They sure do, but not quite equally. UPS pays out $4.04 annually good for a yield of 2.4%, while FDX pays shareholders $2.60 for a yield of 0.9%. That last one is kind of a clincher for me, not to mention the fact that Carol Tome of Home Depot (HD) fame (as CFO) took over the reigns at UPS just as the pandemic was hitting the country last spring. Think she hit the ground running? Yeah, me too.

UPS announced earlier this week that the firm can now produce 1,200 pounds of dry ice per hour across its U.S. facilities? Just think how important that is as early vaccines make their way around North America. Priceless.

(Amazon, Walmart, Costco and UPS are holdings in Jim Cramer's Action Alerts PLUS member club. Want to be alerted before Jim Cramer buys or sells these stocks? Learn more now.)

Get an email alert each time I write an article for Real Money. Click the "+Follow" next to my byline to this article.
TAGS: Dividends | Economy | Investing | Stocks | Technical Analysis | Trading | Transportation

Is Bristol-Myers Squibb Finally Ready for a Breakout?

Prices have rallied from early March and are in a position to test their January highs.

Large purchases of Cortexyme Inc. and NantHealth Inc. shares have been made by insiders recently.

Watch for the Possible Resumption of the Rally in Marathon Digital

I'm looking for a buy 'trigger' against the support and timing.