It's turned into a quiet Friday. A strong start followed by a bit of a fade. However, we're through most of the impact of the monthly option's expiration for October. It's a needed quiet period for traders in my view.

I do like the looks of Gogo (GOGO) heading into next week. The stock has spent a great deal of time consolidating the huge September run higher. We dipped below $9 only briefly, but bulls have fought their way higher riding the 21-day simple moving average (SMA). That should become a key for traders. Any close below that level should be met with caution. A push, especially a close, above $11 should grab the attention of momentum traders. GOGO is a stock that carries a huge short interest, so a squeeze remains in play. Yes, it did sell off a big chunk of its business, but the cash has made it financially more sound, and the stock will still be one of the under-the-radar plays in the 5G space. This will also be a name that will benefit when we see a full return to aviation.

We have a buy trigger in the parabolic stop and reverse (PSAR) along with a MACD that is setting up in the same pattern as price. I would like to see a bit more strength on the Full Stochastics, but it is not a trend killer here. 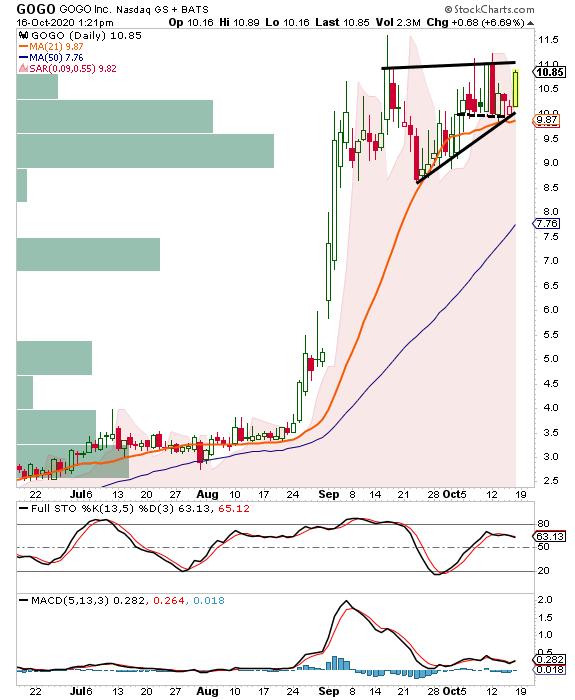 On a close above $11, I'd be a buyer of shares or even look to add to the stock if I were already in it.

In terms of the overall markets, I'm still in no hurry. We have a big earnings week coming next week followed by a monster earnings week following that one. Monster is the most appropriate term as we head into Halloween. I would prefer to see how the early days of next week shape up in terms of earnings reactions before I find myself getting too aggressive. We still sit in a position where waiting to buy new recent highs won't leave a trader missing out on much, while buying in front of the highs now skews risk greater than reward. That still doesn't equate to shorting. It means waiting for triggers and being patient. Let your trade setup rather than anticipating it.

Overall, stock picking has still been the winning approach. We haven't seen the froth leave the microcap small yet despite it not being quite as widespread as we experienced in the summer.

There's nothing wrong with holding a bit of extra cash into the election. We're seeing multiple broker-dealers, especially those online, raise margin requirements due to expected volatility. If it continues, it may become a self-fulfilling action. The constant reminder of potential volatility paired with a need to potentially sell down some positions could actually create the volatility we're being warned about. That's why I don't mind a little extra cash on the trading side at the moment. If this does occur, I can be ready for opportunities.

Get an email alert each time I write an article for Real Money. Click the "+Follow" next to my byline to this article.
TAGS: Investing | Stocks | Technical Analysis | Trading | Airlines | Movies | Music