In his second "Executive Decision" segment during Wednesday night's Mad Money program, Jim Cramer sat down with Giovanni Caforio, chairman and CEO at Bristol-Myers Squibb Co. (BMY) , to discuss his company's planned acquisition of Celgene (CELG) and the recent shareholder challenges against the deal.

Caforio said the deal, announced on Jan. 3, would create the No. 1 company in both oncology and cardiovascular medicines and would create value for BMY shareholders right from day one. The combined company would be introducing six new drugs within the first 24 months.

Caforio added that 60% of Bristol's current sales stem from products that have been introduced in the past five years, and as older drugs lose patent protections it's crucial to have a strong product pipeline. As a combined entity, they will have 20 drugs in phase one and two clinical trials, and they'll be able to develop even more as they begin to work together. Caforio concluded that this was not a defensive deal.

In October, from "left field" the price of BMY declines sharply to quickly wipe out the gains of the wedge. BMY bounces for a couple of months and then sinks to a new low in early January on the CELG news. From early January to now the trading volume has been much heavier.

The daily On-Balance-Volume (OBV) line has moved higher the past two months which is something not seen for a while on BMY.

Today BMY is between the bottoming 50-day moving average line and the flattening/bottoming 200-day line.

The Moving Average Convergence Divergence (MACD) oscillator moved above the zero line in February for an outright go long signal.

In this first weekly bar chart of BMY, below, we can see a mixed picture.

Another "trend" I see developing over the past three years is that declines in the $50-$44 area have been short-lived and probably bought. The most recent dip was this January.

To give some credibility to the observation that declines below $50 have been bought, we can see that the weekly OBV line has slowly risen since late 2016 and now is close to a new high.

The weekly MACD oscillator has just crossed to the upside for a cover shorts buy signal.

In this second, longer-term weekly bar chart of BMY, below, we can see that the tendency of buyers to show up below $50 goes back to 2014. Some market watchers or technicians may suggest that BMY has outlined a major top pattern but the volume pattern and the OBV line do not fit the picture of a top.

If BMY was outlining a major top (think complex head and shoulders top pattern) we should see that the volume of trading would have been heavier in 2014 and 2015 in the left shoulder(s). The right side of the pattern in 2017 and 2018 should see lighter volume but we see heavier volume. Not right.

The weekly OBV line is overall moving sideways but actually rising from late 2016. With the line close to its 2015 highs this speaks more of accumulation (buying) than distribution (selling).

In this daily Point and Figure chart of BMY, below, we see an upside price target of $56.41. 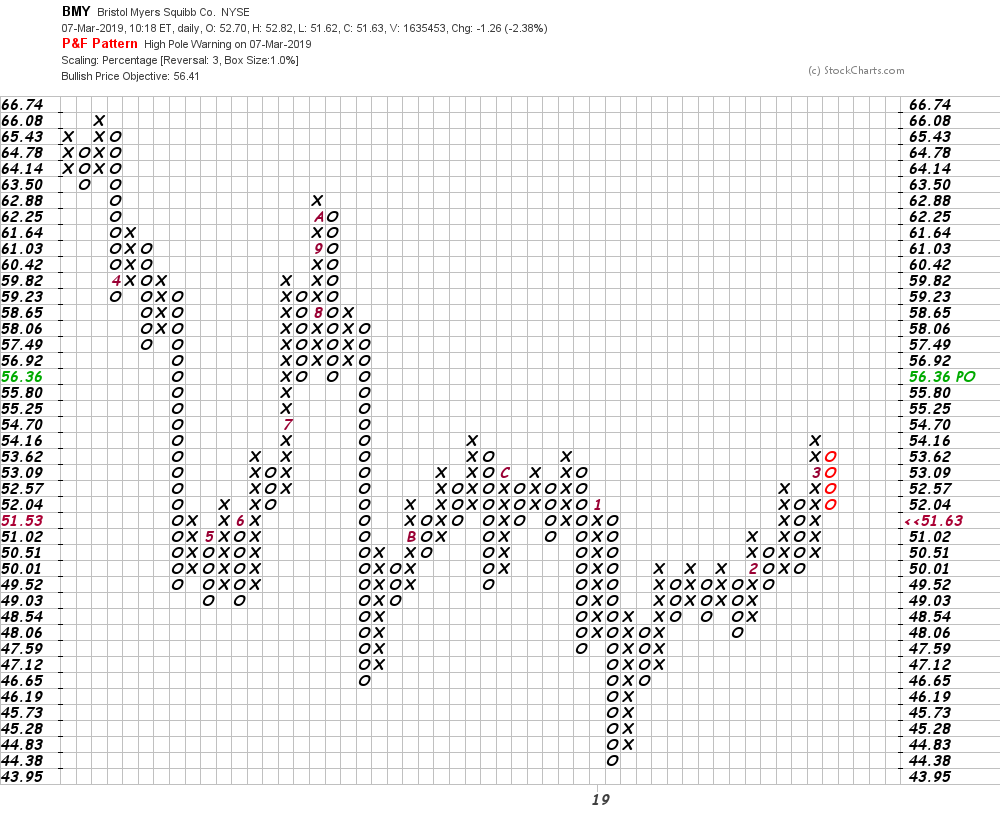 In this second Point and Figure chart of BMY, below, we used weekly data and an upside price target of $65.83 is being projected. 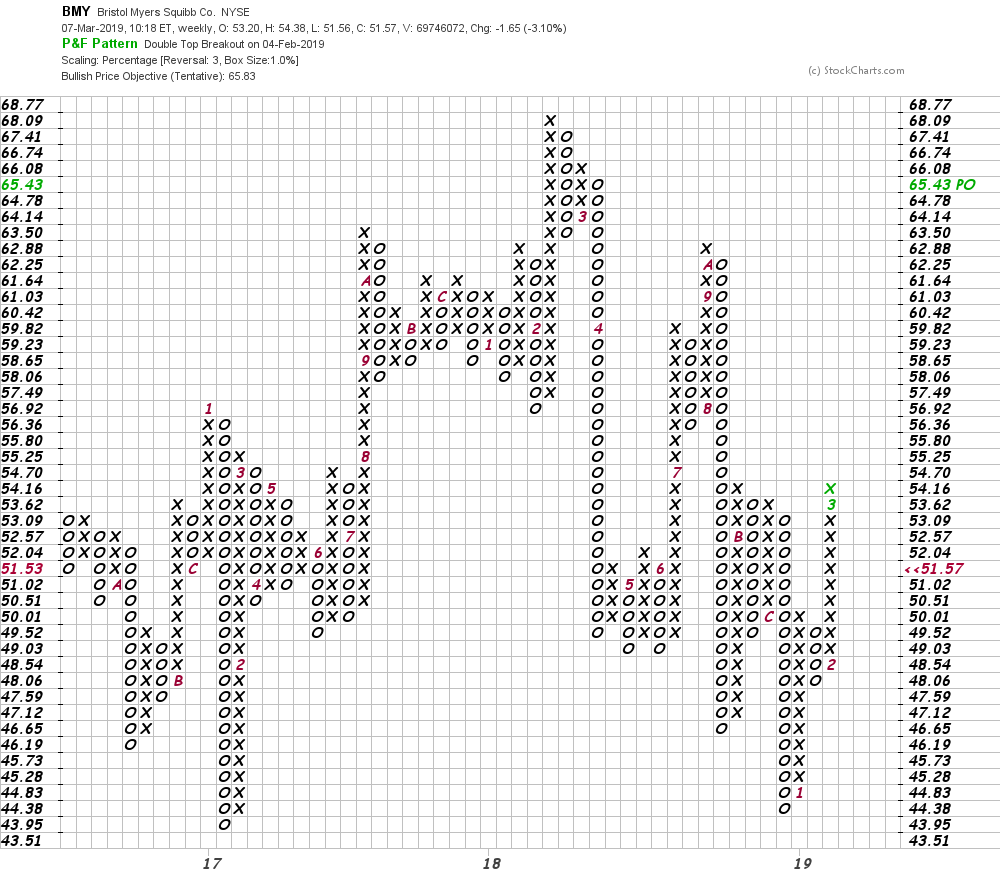 Get an email alert each time I write an article for Real Money. Click the "+Follow" next to my byline to this article.
TAGS: Mergers and Acquisitions | Drug Approvals | Investing | Stocks | Technical Analysis | Trading | Biotechnology | Pharmaceuticals | Executive Interview