Outside of e-commerce, these are the only two retailers I'm comfortable owning. There are a few specialty names that could be argued, I'm looking at you right now Under Armour (UAA) , and I like some online niche spaces like Stitch Fix (SFIX) and Etsy (ETSY) . The old school department names are not getting it down, and after the Kohl's (KSS) disaster from yesterday, it is tough to even look at some mid-tier names.

Despite liking Target fundamentally and as a core holding, I'm befuddled by the current technical setup. Wednesday's huge move higher creates a conundrum on the weekly chart. Let's start with what we know. The clearly defined resistance sits at $82. I don't love all the "white" space on the chart between price and the resistance line that appears November through March, but the rejection at the resistance level in April permits us to use it. 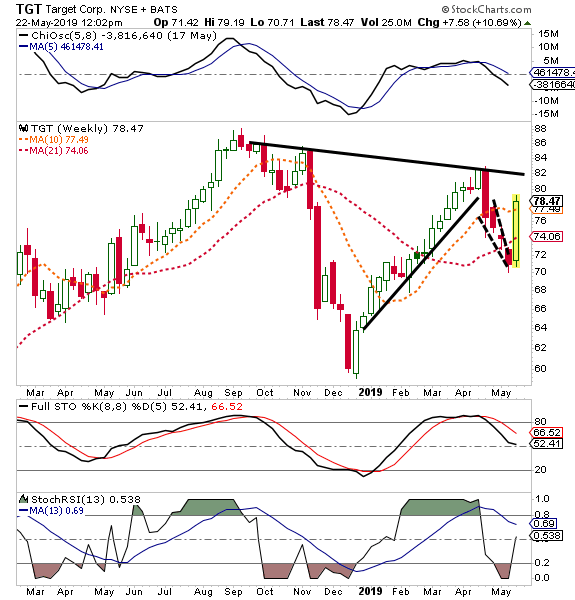 After that recent rejection, Target shares consolidated in a declining wedge. We now have $70 as a support (last week's low close) which ties well with the February-March consolidation area that led to a breakout.

Heck, even the secondary indicators like the StochRSI and Full Stochastics match well with the consolidation of price and subsequent turn. Confirmation. I like confirmation.

The problem is what to do now. Ideally, a trader wants to buy the wedge breakout as close as possible to the breakout level, in this case, $72. Then, the approach would be to take partial profits into $82 and watch for a continued move or a pullback using $70 as a stop. That creates a case of $8-$10 upside against $2-$4 downside. Unfortunately, today's huge move shifts the potential risk-reward while maintaining the same parameters. Upside is now $4 against downside of $8+.

Simply going off the technical picture, I would think a trader wants to wait for a close over $82 or a pullback into the $74-$75 area.

Based on history, we're more likely to see the push higher rather than retracement. Since 2016, whenever Target has experienced a positive close the first trading day after reporting earnings, it has closed higher three weeks later five of six times. The one time it didn't, the stock fell back less than 1% over those three weeks.

Conclusion: I like this stock, liked the report, and want to own it, but would either wait for a breakout or retracement because we're stuck in technical limbo after today's gap higher.

Get an email alert each time I write an article for Real Money. Click the "+Follow" next to my byline to this article.
TAGS: Earnings | Investing | Markets | Options | Stocks | Technical Analysis | Trading | Retail | E-Commerce | Stock of the Day