And they're off. Just like that, first quarter earnings season has begun, and as usual... among the nation's large banks, JP Morgan (JPM) is batting lead-off. Rivals like Goldman Sachs (GS) , Morgan Stanley (MS) , Citigroup (C) , and Wells Fargo (WFC) will step to the plate on Thursday (tomorrow), but today... JP Morgan stands alone.

For the firm, broadly speaking... average loans were up 5%, while average deposits were up 13%. However, the big takeaway for investors on Wednesday morning will probably be the $1.46B provision for credit losses that compares to a benefit of $1.29B for Q4 2021 and a benefit of $4.16B for the year ago period. This provision includes a $902M net credit reserve build that reduced EPS by $0.23. This also includes $524M worth of losses within Credit Adjustments & Other in CIB (Corporate & Investment Bank) driven by funding spread widening as well as credit valuation adjustments relating to both increases in commodities exposures and markdowns of derivatives receivables from Russia-associated counterparties. This knocked another $0.13 off of EPS.

During the quarter, JP Morgan paid out dividends of $3B, or $1 per share, while repurchasing $1.7B worth of common stock. The firm's Board of Directors has authorized a new common equity share repurchase program of $30B, effective May 1st.

Corporate & Investment Bank: Net revenue of $13.5B (-7%) produced net income of $4.4B (-26%). Banking revenue was down 6%. This reflects a 28% decline in Investment Banking and a 33% increase in Payments. Markets & Securities Services revenue declined 8%. Inside of that component, Fixed Income Markets experienced 1% decline, Equity Markets were down 7%, and Securities Services were up 2%. There was a $445M provision for credit losses.

Commercial Banking: Net revenue of $2.4B (flat) produced net income of $850M (-28%) driven largely by credit reserve builds versus releases for the year ago period. There was a $157M provision for credit losses.

Asset & Wealth Management: Net revenue of $4.3B (+6%) produced net income of $1B (-20%). Growth in deposits and loans as well as higher management fees offset by compressed margins as well as the absence of net valuation gains recorded a year ago. Assets under management were $3T, up 4%. There was a $154M provision for credit losses.

Perhaps the scariest single item in the press release was an excerpt of CEO Jamie Dimon's statement that seems to be making the rounds this morning. Dimon said: "We remain optimistic on the economy, at least for the short term - consumer and business balance sheets as well as consumer spending remain at healthy levels - but see significant geopolitical and economic challenges ahead due to high inflation, supply chain issues and the war in Ukraine."

Dimon did not say anything that the rest of us don't know. If anything, I think we can call Dimon a straight shooter. It's not everyday that one hears (or reads) the CEO of a major money center bank (or any large public corporation) come out and tell you that the future just might not be all that bright.

I still believe that JP Morgan is a (the) best in class, large, "money center" bank, even if I have been out of the name for quite some time. Dimon is being honest with us, and I appreciate that. The $30B buyback and healthy dividend (3% yield) certainly make the stock more attractive than it would otherwise be.

Listen, if JP Morgan is having a tough time trading equities and fixed income, and if the investment banking business is not going to be there, it's going to leave a mark on JP Morgan as well as most of their competitors. I think the best chance for bankers to make money over the balance of 2022 is going to come through traditional banking means... a la net interest margin as I do expect the yield curve to steepen from here. If it does not, the performance of banking stocks won't be the day to day priority at my desk.

I do have some exposure to the large banks, but not so much to the "elite" side of the business. I am trying to stick to meat and potatoes banking. For that reason, Wells Fargo and Bank of America (BAC) are my only current longs in the space. We'll hear from Charles Scharf in the (Thursday) morning and from Brian Moynihan on Monday. 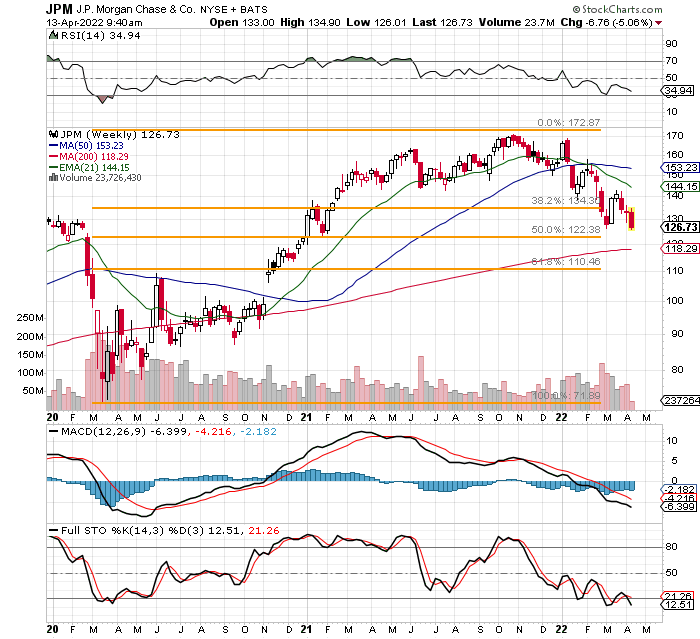 Readers can see that for JPM, both the daily MACD and the Full Stochastics Oscillator are in pretty rough shape. Relative Strength is weak, but not quite technically oversold as of yet. I like JPM. I really do, but I don't think I like it enough to step in here.

(Morgan Stanley is a holding in the Action Alerts PLUS member club. Want to be alerted before AAP buys or sells MS? Learn more now.)

Get an email alert each time I write an article for Real Money. Click the "+Follow" next to my byline to this article.
TAGS: Earnings | Economic Data | Economy | Investing | Markets | Stocks | Technical Analysis | Trading | Banking | Financial Services