For how long have U.S. based automakers been less than exciting? Answer: For a long time. Both Ford Motor (F) and General Motors (GM) have been moving in the right direction of late on news events. I have a little confession to make. I missed the boat on GM, which has been the stronger of the two. I did not however, miss Ford. As a matter of fact, I have been accumulating Ford for months on down days, and that single stock now comprises just about 3.1% of my entire single stock equity exposure. Number two in dollar terms out of 45 equity longs currently on my most active book.

General Motors ran 6.24% on Tuesday, and has kept on running on Wednesday morning. The bright spot for GM is "Brightspot" an EV (electric vehicle) commercial delivery and logistics start-up that already has at least one high profile client commitment, that being FedEx (FDX) . Back in November, GM announced a plan to launch 30 electric vehicle models by 2025. CEO Mary Barra has now also announced a new architecture that cuts development time in half, and will allow the firm to reinstate the dividend at some point this year. Huzzah. But... What if you're already in Ford? If GM is going to attract ESG investment, then throwing a few shares in the portfolio probably is not a bad idea. That said, let's check out that other name.

That... this past Monday, Ford took home two of the three North American Car, Truck, and Utility Vehicle of the year awards. The Ford F-150 won "Truck of the Year." What did you expect? The Hyundai Elantra won "Car of the Year." Okay. The next one is a stunner. The Ford Mustang Mach-E, the firm's first ever all-electric vehicle took the prize for "Utility of the Year."

The F-150 has long been the star of the Ford line-up. That came as no surprise as the 2021 F-150 comes with six different powertrains and for the first time with a hybrid version. Now, I have never thought of the Mustang as a Utility vehicle, but this is different. It really does look like something between an SUV and a CUV, and nothing like a muscle car. Apparently, the vehicle impressed.

Bigger news than that was still to come. Ford announced a major restructuring of the firm's South American operations. The firm will close its three pants in Brazil and stop manufacturing vehicles there altogether. These actions will result in $4.1 billion in pre-tax charges, $2.5 billion in employee separation, termination, and settlement payments, and another $1.6 billion in non-cash write-offs. Know what? The market liked the idea. General Motors ran on Tuesday for other reasons. Ford did its own running, up 5.16% for the day. So far, Ford is treading water on Wednesday morning, trying to digest Tuesday's gains.

Why I Am In Ford

Heck, the stock has been a dog forever. Right? Well, what happened this week is proof. Proof that CEO Jim Farley is implementing his strategy of restructuring underperforming parts to the company. Baby steps. Steps toward generating cash flow, and more than sporadic profitability despite the firm's well-documented liabilities. Plus, the Mustang Mach-E is just the beginning. Electric trucks and vans are not far behind. 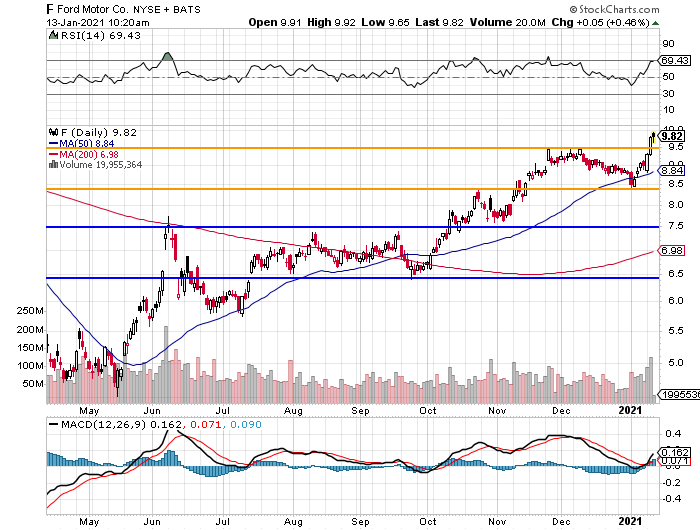 Readers will note that Ford has now gone through two periods of basing consolidation just since early last summer. The first period covered July through early October when the pattern produced a breakout. The second ran from mid-November through this week when we saw another breakout. The pivot taken on Tuesday that must be held is $9.50. A hold above this level creates a target price of $11.40. I don't think I need to panic given limited downside risk per share, but I have more than a few of these in inventory, so I better stick to my code of discipline. We'll go with $8.84 for a new panic point as this is the current 50 day SMA, and also well above my net basis, hence locking in a profit, even worst case.

Yeah, I like Ford Motor. They went to bat big time when the nation called for help back in the spring, building tens of thousands of ventilators, teaming up with GE (GE) Health to do so. Ford also teamed with 3M (MMM) in order to produce millions of pieces of PPE, including face shields, face masks, isolation gowns, and respirators. That's when they caught my attention. They'll also get my business next time I need a vehicle.