Perhaps, Best Buy (BBY) picked the wrong morning to beat earnings expectations. Amid a season mired in disappointing results experienced across the retail landscape that has spared but a precious few, Best Buy reported adjusted EPS of $1.02, a very solid beat on revenue of $9.14 billion. The revenue number just met consensus, bearing evidence to a domestic gross margin that expanded to 23.7% from 23.3%. Just maybe these shares would have held on to their pre-opening gains if the company could have just left it there. However, the nation is embroiled in a trade war that unfortunately does impact the retailers.

Out With The Old

This was the last quarterly earnings report that the firm would release under outgoing CEO Hubert Joly, who by the way, rightfully gets much of the credit for turning this firm around during his tenure. It was left up to CFO Corie Barry, who will take over as CEO on June 11th to provide guidance... on earnings, on sales, on China.

The firm did largely maintain full year guidance that had been provided, the firm expects full year EPS to land somewhere in a range spanning from $5.45 to $5.65, the midpoint of which would obviously fall below consensus view of $5.63. The firm sees revenue for the year at $43.4 billion, also slightly below what analysts are looking for. For the current quarter, the firm is expecting to earn $0.98 a share on $9.55 billion.

On this guidance, Barry opined, "This outlook balances our better than expected Q1 earnings, the fact that it is early in the year and our best estimate of the impact associated with the recent increase in tariffs on goods imported from China." She goes on... "Specifically, i am referring to the increase in tariffs from 10% to 25% on the products on the $200 billion List 3 that originally went into effect last September."

The best news in this report was probably the 1.3% growth in U.S. comparable sales. Though not a tremendous rise, this increase was far better than the 0.9% expected, maybe even better than that was the domestic online revenue growth of 14.5%. E-commerce now amounts to 15.4% of all domestic revenue generation for Best Buy. The worst news was probably a concession that implementation of a "next tranche" of 25% tariffs on the remaining $300 billion of Chinese exports to the U.S. would cause the firm to raise consumer prices.

This name appears well managed. The incoming CEO seems on top of her game. The outgoing CEO is going to remain available as an asset in the newly created title of Executive Chair. The firm is not overly indebted, sees consistent earnings growth, trades at just 11 times forward earnings, and yields 2.89%. This is not the worst stock to own in my opinion, and may be worthy of a small purchase on a discount on a different day. On this day, amid these trade war related headline, with the potential for a risk off event ahead of a three day weekend, I would rather not. 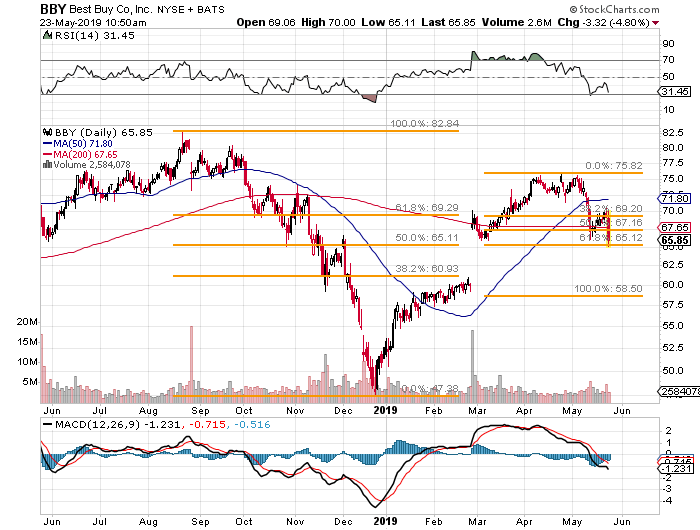 As one can see the 65 level worked like a charm in early Thursday trading, and would also be a 61.8% retracement of the late February earnings related pop. If I were someone who wanted to purchase these shares, I would either wait there for my chance, or sell $65 puts with that strike expiring tomorrow. If one were tagged on those puts, the prudent move would probably be the sell August calls with a strike in between 75 and 77 for whatever the premium value was at that time.

Get an email alert each time I write an article for Real Money. Click the "+Follow" next to my byline to this article.
TAGS: Earnings | Investing | Options | Stocks | Technical Analysis | Trading | Retail | E-Commerce | China

CAG's balance sheet is tough to look at but there are positives.

Put This Semiconductor Materials Stock on Your Watch List

After a fundamental upgrade, we spent some time checking out the charts and indicators.