All things "pets" e-tailer Chewy (CHWY) is set to report the firm's second quarter financial performance this (Wednesday, Sept 1) evening. Before we get into that... Chewy is the kind of business that saw a terrific boost to sales during the heights of the pandemic. More folks were taking on pets, and Chewy provides an outlet to provide for pet food, pet toys, and pet pharmacy/healthcare needs without leaving home. At the end of the firm's first quarter, Chewy reported 19.8 million active customers, up 31.6% from the year prior, and those customers spend an average of $388 on the site annually. For the full year 2020, sales soared 47%.

That said, now the firm is lapping that "pandemi" fueled growth. For the first quarter, sales increased "just" 32%. For this full year, the firm has already guided Wall Street toward sales growth of 25% to 26%. One thing that could not have been expected though, was the Delta variant and its impact upon employees, and the employees of suppliers. This has hurt the availability of stock, as well as forcing the firm to increase wages in order to attract and retain its staff. That hurts margin, and makes this quarter a bit more unpredictable than maybe it would have been.

I have found 15 sell-side analysts that cover CHWY. Consensus view seems to be for a loss of $0.02 per share on revenue of $2.2 billion. If realized, these numbers would be comparable to a loss of $0.08 per share one year ago on revenue growth of roughly 28%. Over the past three months, of those 15 analysts, two have revised their earnings estimate higher, while four have revised downward. Over that same time, nine analysts have increased their revenue projections, while the same two downsized their expectations for revenue. The range of expectations across the entire group runs from a loss of $0.05 per share to flat, and for revenue from a low of $2.15 billion all the way up to $2.6 billion. Readers should be aware that there are whispers that Chewy might post a surprise earnings profit.

Investors should know that three analysts have opined this week going into the numbers. On Monday, five star (at TipRanks) analyst Brian Fitzgerald of Wells Fargo reiterated his "buy" rating on the shares with a $120 price target. However, Fitzgerald did say, "We expect solid profitability, despite wage inflation and forecast EBITDA of $42 million. (Consensus for EBITDA is around $35 million.) We believe that execution remains strong across key initiatives and that CHWY remains in the early stages of category penetration." Quite the endorsement.

On top of that Evercore ISI's Mark Mahaney (five stars), and Robert W. Baird's Justin Kleiber (four stars) both reiterated their firm's versions of 'buy" ratings and their $106 and $105 price targets, respectively.

The shares are very highly valued, trading a high three figure forward looking PE ratio. CHWY trades at almost five times sales, and more than 500 times book. As of the end of the first quarter, the firm's cash balance had shown some growth. That said, current liabilities at that time were larger than current assets, and total assets just edged out total liabilities (less equity) in terms of sheer size.

One thing I really don't like is 37% of total assets being held in inventories. The firm's current ratio stood at the end of Q1 as what I see as an uncomfortable 0.92. The high inventories drag the quick ratio down to (my opinion) an absolutely terrifying 0.53. I will have to check the balance sheet tonight, as many of these entries can fluctuate, but three months ago, Chewy had $117.6 million in accounts receivable on the books, up against $804.5 million in accounts payable.

Know what, gang? Going over these numbers... I just talked myself out of getting long these shares. I may be wrong. There might be a real trade here on the long side, but despite the opinions of the three highly rated analysts mentioned above, I can not invest my hard earned dough in what appears to be an overvalued stock that can not grow sales more than 40% without the help of a pandemic in an environment that squeezes margin. I don't know if I am right, but I have a responsibility to protect my book. 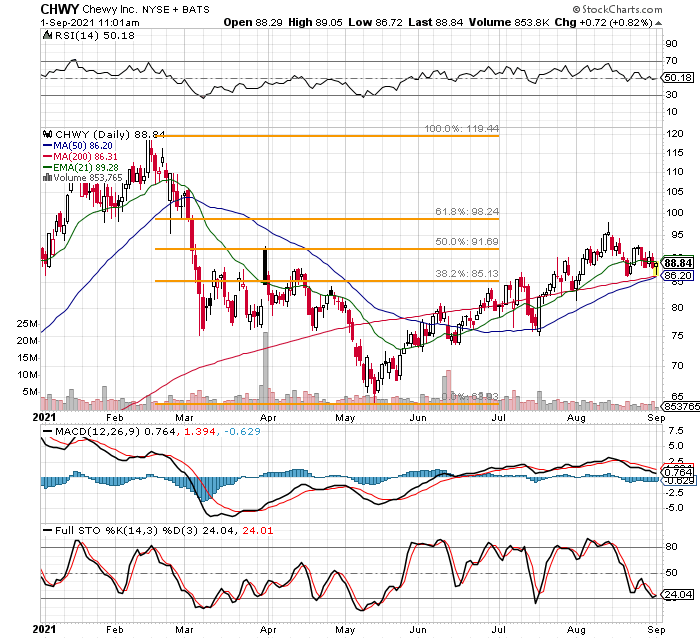 Year to date, readers will see that the rally into August hit a brick wall at a 61.8% Fibonacci retracement of the February into May selloff. The daily MACD does not tell us much. The RSI reads neutral. The Full Stochastics Oscillator thinks the shares are close to being oversold, looks a little unsure. What the shares do have going for them is potential for a golden cross with the 50 day SMA sneaking up on the 200 day SMA in a hurry. That could, on a good earning report, provide for an algorithmic pop.

Options expiring this Friday are pricing in a three to four dollar move by week's end. I am not going to play this one, but an options trader could probably get long an $88/$85 bear put spread for about a net $1.25 (or an $88/$91 bull call spread for just a little less). Risk a buck... twenty-five to try to bring back three bills? Might be worth it. I may even do something like that later in the day, allowing the stock to move throughout the afternoon if it wants to.

Get an email alert each time I write an article for Real Money. Click the "+Follow" next to my byline to this article.
TAGS: Earnings | Economy | Investing | Stocks | Technical Analysis | Trading | Pets | E-Commerce