I had a buddy years ago that played football at a smaller school down south. He was a starting flanker and also served as the team's kick returner. One year, his team served as opening day fodder for Auburn University in Alabama. My friend, who had to return the opening kick-off in front of 100K fans, after never having played in front of more than maybe 10K his entire life, said that waiting for that ball to come down was torture as he just hoped he would not fumble.

Long story short, my friend's team was indeed crushed that day, but at least my friend handled that kick-off and all of the - there were many - ensuing kick-offs without a mishap. Well, the wait is over. JP Morgan Chase (JPM) has reported the firm's third quarter financial performance and the unofficial start of earnings season is officially underway. Still no fumbles.

JP Morgan Chase posted GAAP EPS of $3.74, easily beating Wall Street that was down around $3.00. JP Morgan also put managed revenues of $30.44 billion to the tape. That number was up 2% from Q3 2020, but down 3% sequentially. Oh, and this number also beat Wall Street, just by a smidge.

- Consumer & Community Banking contributed revenue of $12.521 billion, -2% q/q, and -3% y/y. The largest business within this segment is Consumer & Business, which was up 8% y/y driven by growth in deposits and client investment. Two other businesses suffered some contraction, Home Lending, which is self explanatory as well as Card & Auto, more due to lower operating lease income on the auto side and reduced revolving credit balances on the card side.

- Corporate & Investment Bank posted revenue of $12.396 billion, amounting to a contraction of 6% q/q, and an increase of 7% y/y. Banking revenue popped 30%, driven by the investment bank that had a record quarter ($3 billion, up 45%), itself driven by fees that were up 52%. Markets were mixed, as Fixed Income revenue was down 20%, but rescued by Equities driven revenue that was up 30%.

- Asset & Wealth Management kicked in $4.3 billion in revenue. This was up 5% q/q, and up 21% y/y. Key to performance here were higher management fees, as well as growth in deposits and loan balances. AUM (assets under management) increased 17% to $3 trillion.

- Commercial Banking pitched in revenue of $2.52 billion, up 1% q/q, and up 10% y/y. Higher revenues from wholesale payments and investment banking contributed here, as well as positive provisions for credit losses.

What pushed net earnings and earnings per share over the top was a $2.1 billion reserve release, partially offset by $524 million worth of net charge-offs amounting to a net benefit of more than a $1.5 billion provision for credit losses. The balance sheet remains fortress-like. Net interest income increased 1% to $13.2 billion, now totaling $38.7 billion over nine months. The firm stuck by previously announced guidance of $52.5 billion in NII for FY 2021.

Throughout the three month period, the firm paid shareholders one dollar a share, or $3 billion just to stick around, while also repurchasing $5 billion worth of common stock. Tangible book value per share increased 9% to $69.87. 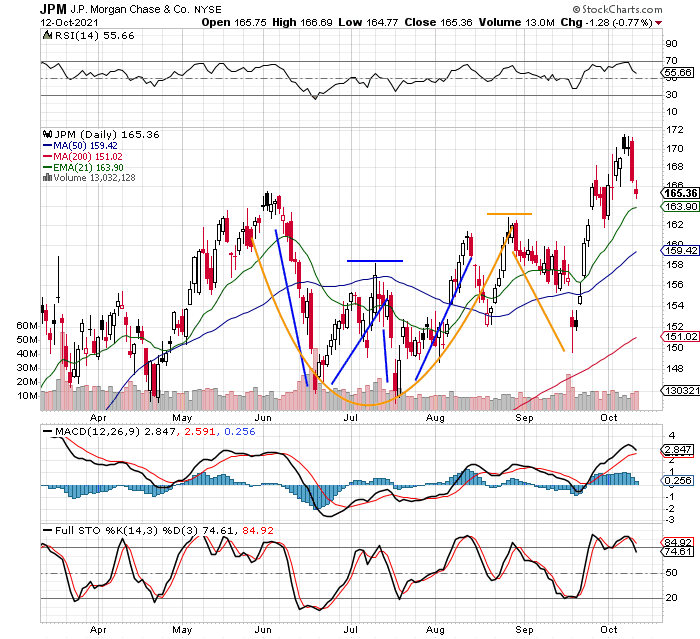 Not really sure what I'm looking at here. I see in blue, a double bottom, with a $159 pivot. That would create a target price of $190. Certainly not a clean breakout from that pattern however. I also see a jagged, bit possibly intact cup with handle pattern in yellow with a $164 pivot. That would produce a $196 target.

I don't like the way the stock ran into mid-September, and apparently neither do either the daily MACD, nor the Full Stochastics Oscillator. The RSI seems cool with it. From a fundamental point of view, I am not in love with the fact that the outperformance was reliant upon the reserve release, but I do fully recognize that this money was indeed profit the firm had been deprived of recognizing earlier, so it is real money, and honest profit. This does not become a poor quarter without it. I am just not sure that I want to buy the stock today, and most of Wall Street, at least early appears to agree.

I like JPM at the 21 day EMA. I love JPM at the 50 day SMA. I may regret this next week, but I do not love the stock today. That said, I am long Goldman Sachs (GS) for a traders' trade, and based on JPM's performance in equity markets over the third quarter, I am encouraged there.

Elsewhere across the space, I remain long Bank of America (BAC) , and Wells Fargo (WFC) as potential beneficiaries of improved net interest margins going forward, and I remain long Sofi (SOFI) as I have been telling banking folks for months that Anthony Noto is coming to take your lunch. BAC, and WFC report tomorrow (Thursday), GS reports this Friday, and SOFI reports in about a month.

It's Hard to Gauge Sentiment Right Now, and That Makes It Tough to Trade

Bears and bulls are trying to discern which way the market is flowing, though neither is secure in their position.

Can Costco Buck the Retail Train Wreck Trend? We're About to Find Out

There is risk associated with buying any retailer ahead of earnings at this point, but this guy dipped his toes in the warehouse club's shares anyway.

Nike Is Ready to Spring Higher

Here's where the shares could rebound to.