Zelnick said Take-Two continues to focus on creating the best digital entertainment in the world and keeps delivering innovative new titles that their customers love. He said they've been very happy with NBA 2K, which saw sales rise 140% after a slow start. Another hot title for Take-Two is Red Dead Redemption 2, the western-themed game that has already sold more than 25 million units. Zelnick said the world was ready for a western and Red Dead gives them an experience they won't find anywhere else.

When asked about those who link video game violence to real violence, Zelnick said it's disrespectful to the victims of real violence to link it to entertainment. He said Take-Two's titles are sold around the globe, but gun violence in America is a problem different from those of other countries.

We looked at TTWO last week and felt that "Tuesday's early trading looks strong but it may not produce an upside breakout. In this current market environment I would wait for more price action before going long." Let's see what the charts look like now.

In this daily bar chart of TTWO, below, we can see that prices managed to trade higher as the broad market tumbled. Prices are above the rising 50-day moving average line after a brief test. The slower-to-react 200-day line is bottoming.

The On-Balance-Volume (OBV) line shows a small double top which is a small bearish divergence when compared to prices making higher highs.

In this weekly bar chart of TTWO, below, we do not have much to report from last week as prices are still at the underside of a probable resistance zone from $130 to $140.

The weekly OBV line has not made a new high for the move up and the MACD oscillator has not narrowed from last week.

In this Point and Figure chart of TTWO, below, we can see that new highs have been made and now the software is projecting an upside price target of $168 instead of a bearish target last week. 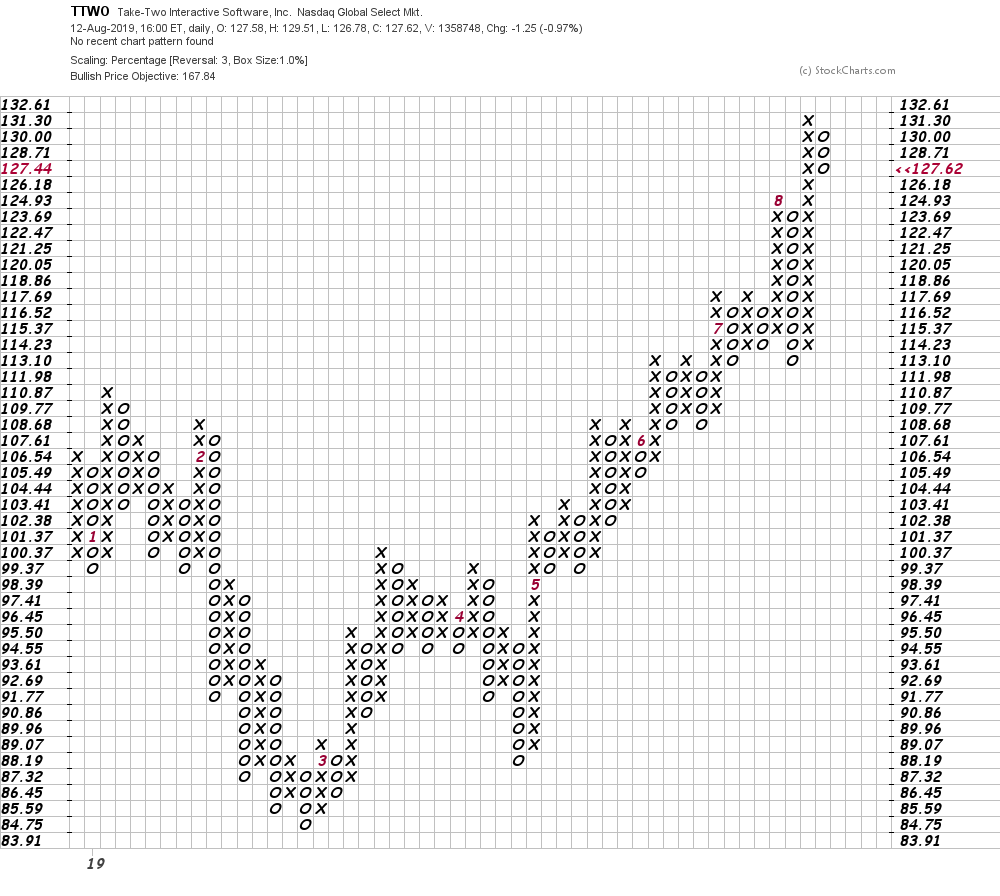 Bottom line strategy: Call me gun shy but even though TTWO has made a new high for the move up and a bullish Point and Figure target is indicated, I prefer to stand aside on purchases of TTWO in this weak market environment. TTWO is showing superior relative strength but I have this fear that the music will stop and I won't find a chair.

Get an email alert each time I write an article for Real Money. Click the "+Follow" next to my byline to this article.
TAGS: Investing | Stocks | Technical Analysis | Trading | Sports business | Gaming | Mad Money | Executive Interview | Sports