Zoom Video (ZM) knocked the cover off of the ball for their first quarter. They really did, and painted a rosier picture moving forward. It's no wonder that the shares traded higher overnight even if the initial knee-jerk response had been lower. So why do I have doubts? Is it something somebody said? Maybe. We all know what JP Morgan CEO Jamie Dimon (JPM) and Goldman Sachs (GS) CEO David Solomon had to say about the "work from home" culture. We all know that he's not alone. Many businesses seek to bring folks back to on-premise employment, and we all know that in some way, shape or form, there will be a hybrid work model in place for many companies. In fact, that's what Zoom Video is counting on. Let's talk.

For the three month period ending April 30th, Zoom Video posted an adjusted EPS of $1.32, crushing expectations of under a dollar and good enough for year over year earnings growth of 560%. The firm generated revenue of $956.2 million, about $50 million above the street and also triple digit growth (+191%). Net cash provided by operating activities hit $533.3 million, up from $259 million a year ago, while free cash flow reached $454.2 million, up from $251.7 million last year for the comparable period. Gross margin of 73.9%, was an improvement over last year's 69.4%. This led to adjusted operating margin of 41.9%.

As for the firm's client base, the number of customers with at least 10 employees hit 497K, up 87% y/y, but only a sequential increase of 30K (+6.4% q/q). The firm now has 1,999 customers contributing more than $100K in revenue over the trailing 12 months, which is up 160% y/y, but again up 22% q/q. There is no doubt that as the restrictive conditions under which businesses had to operate started to ease in 2021, so did growth metrics for Zoom's performance in my opinion.

For the current quarter, Zoom Video sees revenue landing in a range spanning from $985 million to $990 million, providing adjusted income from operations of $355 million to $360 million, which would be adjusted EPS of $1.14 to $1.15. All of these guidance metrics are above current industry expectations. Okay, I get that. I also get that while this would be earnings growth of about 24% on revenue growth of about 49%. Nice growth? Yes. For anyone else. For Zoom, a dramatic slowdown.

For the full year, Zoom again raised guidance above Wall Street's expectations. The firm expects full year revenue of $3.96 billion to $3.99 billion to produce adjusted EPS of $4.56 to $4.61. Zoom Video CEO Eric Yuan said, "The hybrid model is here to stay." He then added, "We are energized to help lead the evolution that allows greater flexibility, productivity. and happiness to both in-person and virtual connections."

So, About My Doubts

Forget Jamie Dimon and David Solomon. I speak of my neighbor down the block. Let's call him Gus as that is definitely not his name. Gus has a corporate office job in New York City, but has been working from home since the epidemic started. He knows that I have been working from home as well. Now, I know a lot of folks work just as hard from home or remotely as they do when on location. I like to think that I am one of those, but I am different. I work for myself. If I don't work hard or if I just don't do a good job even if I do try hard, it very directly and very negatively impacts the people I love. Gus works for a large firm. Gus has a base salary.

So, Gus comes up to me, staying six feet away. He is not vaccinated. Gus says, "How easy is this? Anyone who says they work as hard at home as they do in the office is lying. They have no idea how little I get done during the day as long as I make sure they notice me working at certain points during the day." Well, isn't that just grand? What if a company with 1,000 employees has 900 employees that work their tails off, but 100 "Guses"? That's why leaders such as Dimon and Solomon want their people on premise. There will be remnants of the work remote culture that last in some corners of the economy for perhaps years, or maybe longer in countries that lag as far as vaccination goes.

That said, don't you just crave going to work and being noticed like the old days? Don't you want to see clients and take them to dinner or a ballgame? I think that there will be a backlash against remote work as if it were a bad memory. I also think that whether or not I am right or wrong about that.... that Zoom Video has enjoyed its last quarter (at least for a long time) as a "growth' stock and 87 times is a whole lot to pay for a stock experiencing a dramatic slowdown in said sales growth that pays shareholders exactly zero dollars and zero cents to hang around. 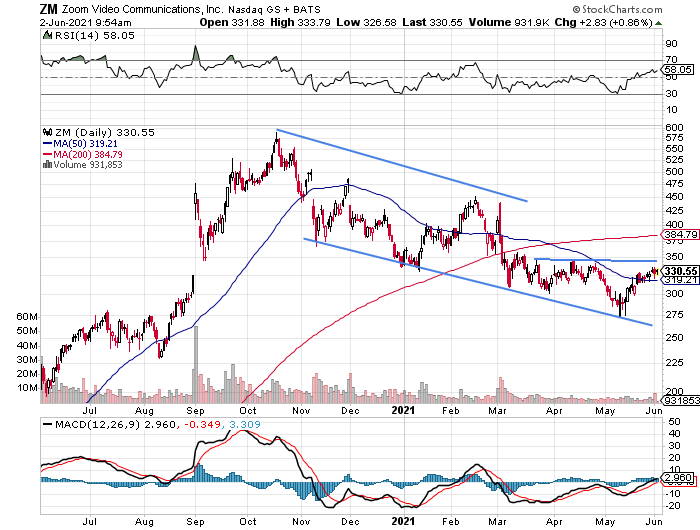 What I see here is a downward sloping pattern that begins back in October 2020. The lower trend line continues to make new lower lows right on through May 2021, while the series of lower highs stops in March and then moves sideways forming a line of resistance yet to break. This is no "falling wedge" pattern which would have been bullish. It's kind of the opposite of an "ascending triangle", signaling at least to me increased volatility that results in a continuance of trend (lower) unless there is a successful breakout past that line of resistance at $345.

I don't see that happening. In fact, I would expect that on a longer timeline, perhaps the series of lower highs might resume and in the end these two months of straight line resistance might not be very recognizable.

Note: This trade is known as a bear put spread. This is a far less risky way to play the downside than is hosting the equity. The purchase at the lower strike price limits any potential profitability but also helps subsidize the initial purchase of the put with the higher strike price. In this example the trader is betting $1800 in an attempt to win back $5K for a max profit of $3200. The trader needs the shares to trade at $302 or lower upon expiration in order to break even.

Get an email alert each time I write an article for Real Money. Click the "+Follow" next to my byline to this article.
TAGS: Earnings | Investing | Stocks | Technical Analysis | Trading | Technology | Telecommunications