Regular readers know well that earlier this year in response to what were at the time expanding yield spreads, as well as a loosening of restrictions on returning capital to shareholders by the Federal Reserve, I had added to an existing long position in JP Morgan (JPM) , reestablished an old long in Wells Fargo (WFC) , and looked to gain regions exposure through US Bancorp (USB) . All three have worked out well to this point. Of those names, it was USB, a name that I just finished getting out of yesterday, as the name had hovered at target for about a week straddling its Q1 earnings release without giving reason to increase said target.

That said, I had become frustrated with USB early on, as it did not take off until early February. I added an old friend in order to increase exposure to the regional space, as these types of banks tend to be less reliant upon trading or investment banking and more reliant upon traditional banking... or demand for credit spread over what was at the time expanding potential for net interest income. Those who have been with me the longest will recall that I built much of my reputation as a trader on the backs of the US banks, and that KeyCorp (KEY) had almost always found a place on my book. This stock has gone through two three year-ish periods over the past decade or so that a trader could consistently trade in and out of the stock for a cool buck without ever feeling significantly pressured by risk.

That's not why the name is on the book now, but as interest rates have stalled, I have no problem falling back on old tricks if that's what the market gives me.

Tuesday morning. Most of the banks have long since spit out their digits and moved on. Cleveland, Ohio based KeyCorp posted GAAP EPS of $0.61 (up $0.05 from a year ago), easily beating expectations on revenue of $1.75 billion. The revenue print was good enough for year over year growth of 19%, and also good enough to beat the street. The firm finished the reporting period with a Common Equity Tier 1 ratio of 9.8%, versus the firm's own target of 9% to 9.5%. Provisions for credit losses amounted to a benefit of $93 million, which includes a reserve release of $207 million.

Q1 net interest income increased from $989 million to $1.01 billion, falling just short of Wall Street's expected $1.2 billion, as net interest margin from continuing operations disappointed mildly at 2.61%. This would be comparable to 2.7% for Q4 2020,and a whopping 3.01% for the year ago period. Non-interest income popped nicely to $738 million from $477 million one year ago, but fell from $802 million for Q4. The street was looking for something in the $670 million's.

Average loans for the quarter fell slightly to $100.7 billion from $101.7 billion sequentially due a reduction in commercial loans as a result of PPP loan forgiveness. Average deposits increased sequentially from $135.7 billion to $137.7 billion driven by commercial growth as well as increased balances at the retail or consumer level.

KeyCorp is a dividend stock, paying out $0.74 per share annually in quarterly installments, good for a yield of 3.62%. Investors may recall (or may not) that the firm had announced a new share repurchase program worth up to $900 million good through September 30, 2021. Through the end of Q1, the firm had repurchased $135 million worth of common stock, or 15% of the authorization. 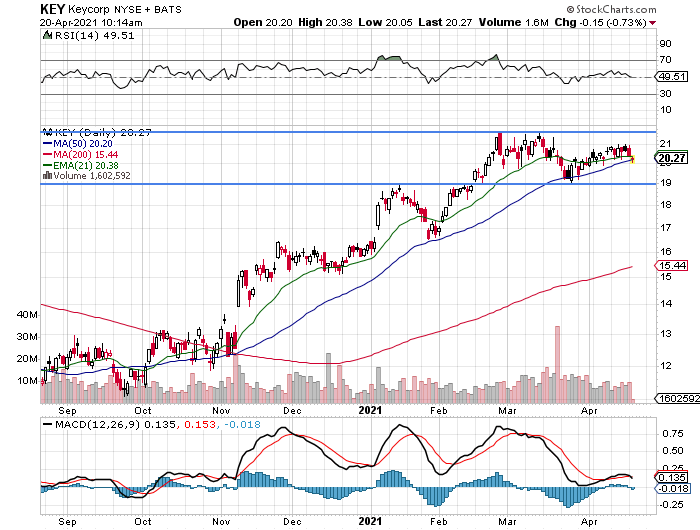 The shares have been stuck in a range, or a basing period of consolidation since mid-February after experiencing a tremendous run (in percentage terms) from September up until that point. At this point, the stock shows neither strength or weakness in relative terms (RSI), shows a weakening daily MACD, and lives with a significant battle going on as the 21 day EMA and 50 day SMA collide.

There could be some movement here. Not that there are a ton of swing traders in KEY, but you could lose or gain support of those kinds of traders that have taken note as well as portfolio managers with an interest at the same time as these lines have practically merged.

Right now, my plan, as simple as it is... would be to add at or close to $19 and reduce at or close to $22. With any luck, this base lasts for long enough, allowing for trade revenue generation, while paying me (us) 3.6% just to hang around. Oh, and if you hang onto a few banks through the end of June, the Fed is likely to ease restrictions on returns to shareholders even more after the stress tests. This should give the whole financial sector a boost. Don't be short the banks in June. Write that down if you have to.

Get an email alert each time I write an article for Real Money. Click the "+Follow" next to my byline to this article.
TAGS: Dividends | Earnings | Interest Rates | Investing | Stocks | Technical Analysis | Trading | Banking