Thank you very much, Mr. Roboto.

For doing the jobs nobody wants to do

On Thursday, Tesla (TSLA) held the firm's AI (artificial intelligence) Day. No, CEO Elon Musk did not promise a million robo-taxis or anything like that. He did, after about 90 minutes, close the event by producing a prototype humanoid robot. Investors wanted to hear about the firm's upcoming upgrades to its AI features, to its neural network, and to the Dojo supercomputer that will ultimately train the firm's vehicles to navigate without human assistance.

About that... earlier this week, the National Highway Traffic Safety Administration launched a probe after identifying 31 accidents involving Tesla over three and a half years that were connected to the use of Tesla's "Autopilot" system. The probe involves 765K Model X, Model Y, and Model 3 sedans manufactured between 2014 and 2021.

Let's talk about the robot. "Tesla Bot" stands 5 feet tall, weighs 125 pounds, and runs on the same artificial intelligence used by Tesla's autonomous vehicles. Musk stated: "We're making the pieces that would be useful for a humanoid robot, so we should probably make it. If we don't, someone else will - and we want to make sure it's safe." Musk added that such a device could result in a future where "physical work will be a choice." He also said that the robot would ultimately perform "only dangerous, repetitive, boring tasks" and added, "There will need to be universal basic income." That was actually the first thing I thought of as well.

The ongoing semiconductor shortage has been hitting the auto industry as hard as any. Earlier this week, at Barron's, Al Root suggested that this shortage could last for years. Toyota Motor  (TM) plans to cut global production in September by 40% from the firm's original plan. Volkswagen (VLKAF) just warned of a possible coming production cut. Ford Motor (F) is temporarily closing the firm's Kansas City assembly plant due to this issue. Tesla, it was thought... had mitigated the chip shortage better than other firms.

On Thursday, CNBC ran a story illustrating the fact that customers waiting for Tesla's Model Y and Model S vehicles are experiencing long delays. A Tesla employee told CNBC that staff are too scared to ask for information on just what is causing these delays. CNBC, in the article says that an unnamed Tesla sales employee said that delivery staff are not getting enough information and can't answer questions for customers. The employee did add that staff basically understands that parts shortages and difficulties with new equipment at the Fremont factory are behind these delays.

Readers will recall that Elon Musk said back in the spring that the chip shortage was creating "insane difficulties" for Tesla.

We all know that Tesla reported an impressive second quarter. In fact Tesla has impressed more often than not for multiple quarters now. Twenty-one sell side analysts currently track the stock. For the current quarter, consensus view for EPS is about $1.40, with a range of $0.93 to $1.91. Revenue is centered around $13 billion, with the range spanning $11.7 billion to $15.8 billion.

Two five star (at TipRanks) analysts have opined on Tesla since Thursday. Dan Ives of Wedbush thought that the robot was a "head scratcher", but was impressed enough to leave his "buy" rating and his $1,000 target price for the shares in place. Adam Jonas at Morgan Stanley reiterated his "overweight" rating as well as his $900 price target. 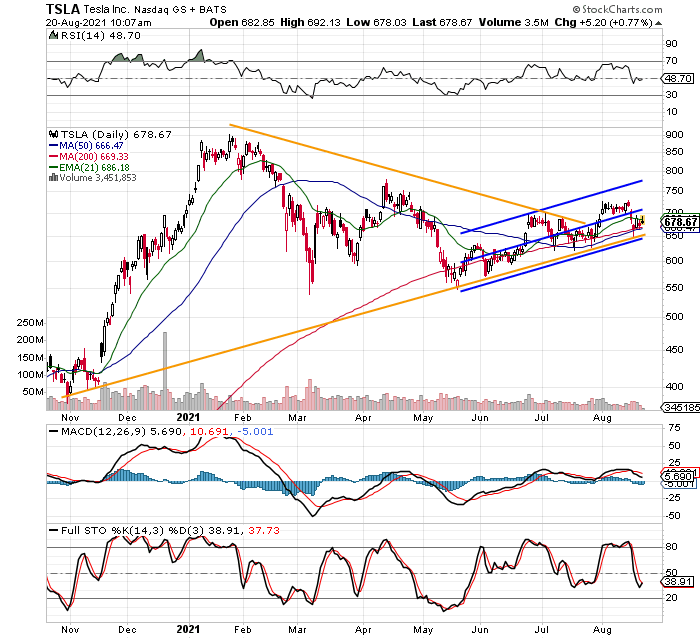 First, I want to explain the orange. That's left over from a past chart that I showed you previously. You can see the attempted breakout as that triangle closes. However, that breakout failed. Now we kind of have a rising trend in place since May that does not really fit any of my Pitchfork models. Clearly, Tesla is nowhere near being overbought nor is it oversold. The daily MACD is stuck in the mud. Let's close in on that traffic jam of averages, shall we?

How about that? Tesla is trapped for now, trying to find support at the 50 day SMA and 200 day SMA that happen to be running close together, but is having trouble retaining the 21 day EMA at $686.

Note 2: The trade works just as well with puts if that's what your gut tells you.

Get an email alert each time I write an article for Real Money. Click the "+Follow" next to my byline to this article.
TAGS: Earnings | Investing | Stocks | Technical Analysis | Trading | Automotive | Semiconductors & Semiconductor Equipment | Technology | Elon Musk | Electric Vehicles