On Thursday night, my favorite retailer reported its fiscal second quarter financial results. To label Costco (COST) my favorite retailer is to put it mildly. This name is the very last retailer left anywhere on any of my portfolios, and it has been since completing my Macy's (M) trade around that firm's investor day a month ago. Earlier this morning, in my Market Recon column, I referred to airline stocks as poison in this environment. Obviously, the airlines have been awful, but the word poisonous might be extended to describe anything related to other forms of transportation, Energy, the Financials, recreation, pretty much name it. The list goes on, and includes retail. Unless a retailer sells the kinds of items that experience increased demand when ordinary folks are scared.

For the quarter, which ended February 16th, Costco reported EPS of $2.10, beating consensus by four cents on revenue of $39.07 billion. The revenue print also bested expectations and was good enough for year over year growth of 10.4%. This growth was indeed an acceleration from the past four quarters that all experienced sales growth in between 6% and 7%.

Comparable sales growth was outstanding, +8.1% in the U.S., and +7.9% company wide (ex-fuel & gas). Average ticket size grew by 2.9%, which does include fuel purchases. Membership income for the quarter landed at $816 million (+6.3%) on the strength of 100.9 million cardholders split among 55.3 million membership households. Net income printed at $931 million, an increase of 4.7% from one year ago. Perhaps significantly, e-commerce sales grew an impressive 28.4%.

Quarterly performance was aided by an increase in sales over the final week of the reporting period (which again ended February 16th). That acceleration in sales has apparently continued. Costco has always released monthly sales data, so we do have those numbers.

For the month of February, the firm posted a 12.1% increase in comparable sales, and noted that much of the increase came toward the later part of the month. The problem was that sales could have been even greater for the month as there were scattered scarcities of certain items as consumers stocked up in preparation for the potential market and human impacts of the coronavirus.

This, I experienced first hand, as I visited my local Costco location twice this past week. Last Saturday, the parking lot was tough to get into, the shelves were still stocked, but certain items such as bottled water were starting to run low. On Tuesday night, the lot was empty, the shelves were fully stocked, and shopping was a truly pleasant and stress-free experience.

For their part, the chain has made it known that deliveries are coming in every day, but some items have been tough to keep in stock.

What They Are Saying

Since reporting the numbers, many Wall Street analysts have expressed opinion. Among them are six that I consider to be among the best. All of those six have come out as positive, all six have rated the name as either a "Buy" or their firm's equivalent. The average price target of these six is now $337.50. 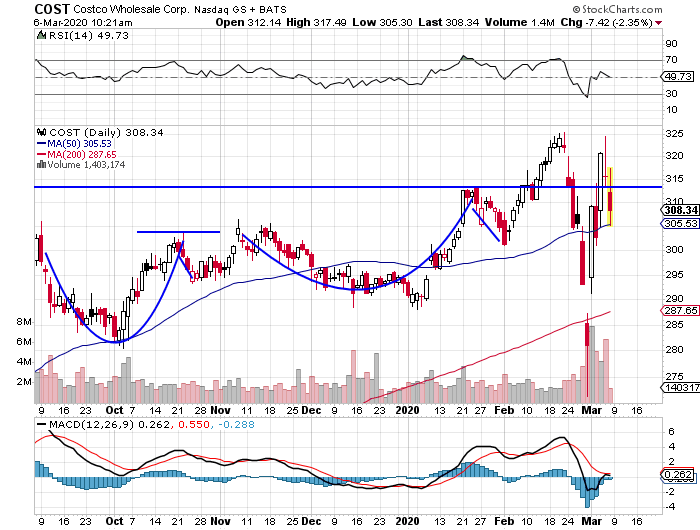 What I see, and this is a messy chart, is a cup with handle pattern ending in mid-October that led to a failed breakout. Why show you that? Simple because past performance could matter. Since then we have a shallow cup (saucer) with handle that did provide a breakout above a $314 pivot in early February. Then the virus hit the marketplace. Since taking an initial pasting, these shares have regained both their 200 day SMA as well as their 50 day SMA. This morning in a weak tape, Costco struggles to hold that 50 day line. I see this chart as constructive. Perhaps, I am biased, but I fully intend to add to my long position today (Friday) as close to that $305 spot as possible even though this area is well above my net basis. That's how confident I am in this firm, and its shares.

(Costco is a holding in Jim Cramer's Action Alerts PLUS member club. Want to be alerted before Jim Cramer buys or sells COST? Learn more now.)

Get an email alert each time I write an article for Real Money. Click the "+Follow" next to my byline to this article.
TAGS: Earnings | Investing | Stocks | Technical Analysis | Trading | Retail | E-Commerce | Stock of the Day | Coronavirus