Monday nights make me think of Joe Namath. Guess that makes me the only one, but you have to remember. In my youth, Monday Night Football was new, the Jets were actually good, and their quarterback was their star. Hence, they appeared on national TV often back when that was still a big deal. Oh, and I grew up in the shadows of Shea Stadium where the team played at the time.

This was a different kind of Monday Night. Not hot wings. No Joe Willie. I do "it" at least once a week. Yes, I do look at charts all day long every day. At least once a week though, I go through my entire book and chart every position in alphabetical order (I'm not too crazy) just to make sure that there is nothing I'm missing. It takes a while, which is why I only do it once a week, and usually on the weekend at that.

A lot of the recent talk around Microsoft has been in regards to video games, but as you know, we do go through the firm's quarterly earnings reports four times a year, and this firm is a broad empire with multiple revenue drivers, as well as multiple margin providers. Just an FYI... MSFT took something of a beating in the three weeks or so that followed the April 27tth earnings release despite reporting another very solid quarter. The shares have since recovered most of that lost ground.

Readers will see the near completion of a cup pattern that runs from late April to the present. The pivot here, should a handle not form... will be $263, which is the left side of the cup. Should a handle develop, then the pivot shifts to the apex of the right side of the cup. Relative strength is good but not technically overbought. The daily MACD presents favorably.

Investors should note that Microsoft has scheduled a June 24th event where it is believed that the firm may launch their first operating system (Windows 11?) as a successor to Windows 10, which I just can't believe has already been around for six years. Windows accounts for more than a quarter of both revenue generation and profitability for the firm as whole, so this is potentially huge. The chart is setting up, at least in my head, for a breakout that times with this event.

The stock has traded sideways for what seems like (actually is) 10 months or so. The shares have hit resistance in the high $130's or low $140's since peaking there as the shares split 4 for 1 in late August 2020. The stock admittedly, despite continuing to perform well as regularly returning capital to shareholders, has issues.

Supply chain bottlenecks. Semiconductor shortages. A potential "Tech of Trade Cold War" with China that appears to be the one area where former President Donald Trump and President Joe Biden are of shared opinion. Then there's regulatory/antitrust matters concerning the Apple services ecosystem that seem to crop up somewhere on planet earth nearly constantly. Just this morning, we heard from the UK's Competition and Markets Authority. 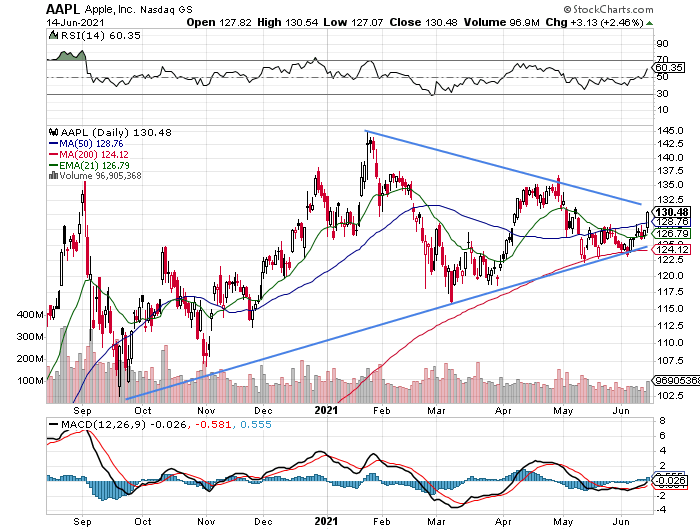 What readers will see here is known as a "symmetrical triangle" or at least it's been symmetrical since January as the name started making lower highs to go along with the series of higher lows that began way back in September. Symmetrical triangles can break out in either direction, but I believe that despite this morning's minor price contraction, it works in favor of an upside pop for the shares.

The most important thing I see here is the fact that AAPL took the 50 day SMA on Monday, after taking the 21 day EMA last Monday and using that line as support for four days. This came itself after AAPL bounced off of the 200 day SMA on June 3rd. Relative strength there is also good, but not overbought. The daily MACD is not quite as positive as it is for MSFT, but all of the components are at least curled in a northerly direction.

(Microsoft and Apple are holdings in Jim Cramer's Action Alerts PLUS member club. Want to be alerted before Jim Cramer buys or sells these stocks? Learn more now.)

Get an email alert each time I write an article for Real Money. Click the "+Follow" next to my byline to this article.
TAGS: Investing | Markets | Stocks | Technical Analysis | Trading | Software & Services | Technology | Advertising