We're finally seeing a bit of selling out there. Given the run we've had, this is healthy and needed. And it's still a blip. We haven't hit the 21-day simple moving average (SMA). If you look at the (SPY) , that's been our bounce point.

Check out the chart. 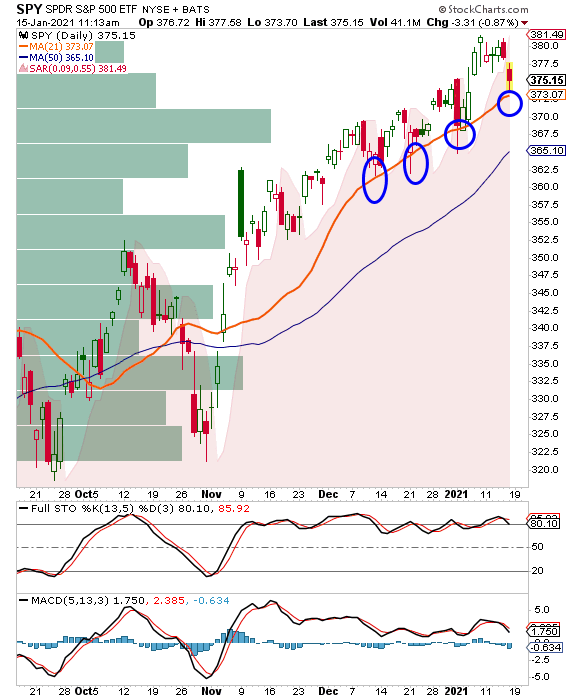 While some may be a bit disheartened to actually seeing red on their screens, this is a necessary evil if we want rallies with staying power. Overextended rallies lead to chasing. They also skew our risk-reward into an area that is either less attractive or more difficult to measure. In short, we're guessing more than anything.

If you saw a down day coming, give yourself a pat on the back. If you've been playing for a down day for weeks, maybe hold off on the celebration. It's been a tough call. Like other events, it's easy to have things fly under the radar on us and catch us by surprising if we're not paying close attention. No pun intended there, and you'll see what I mean by that in a minute. I missed it initially myself.

Back on January 6th, the FAA added 12 members to the Drone Advisory Committee. It consisted of folks who, as traders, we should pay more attention to but often don't. Drones are set to become a bigger and bigger part of the commercial world and our day-to-day lives.

One name on the list did catch my eye on a second pass: Molly Wilkinson. She's the VP of regulatory affairs at American Airlines (AAL) , but I'm not looking at AAL stock here. They aren't much of a player in the drone world. But if you check out the Draganfly (DFLYF) Advisory Board, you'll find her name as a member.

That tie is intriguing. Of course, it doesn't guarantee anything, but it never hurts to have a woman on the inside that can help steer the company in the most efficient direction.

It's worth noting as well that Draganfly announced two days ago it had begun the process for listing its common shares on the NASDAQ Capital Market. This would certainly help liquidity around the stock. Shares leaped on the news, now sitting considerably higher than when I wrote about them just a few days ago on January 11, 2021. If you don't want to chase, there is a backdoor play open for longer-term investors that I mentioned on Monday.

Last year, this was one of the few over-the-counter names I wrote about as a buy-and-hold long. For 2021, I have two more on the table that I'll be covering in the next week or two. I'm using the long weekend to complete my due diligence and begin my writeups. Stay tuned!

Get an email alert each time I write an article for Real Money. Click the "+Follow" next to my byline to this article.
TAGS: Investing | Markets | Stocks | Technical Analysis | Trading | Airlines | Technology

Wingstop May Need More Napkins Before It Bottoms

The shares peaked in September and have suffered a painful decline.