The stock had been one of a few more defensive stocks that have been in the Sarge portfolio throughout. CVS has its warts, sure, but the stock has been stable, and yields 2.2% to boot. Yes, I have found fault with the balance sheet, and I don't know how much I trust it out over the long-term, but the stock has done what I asked of it.

Last year, Karen Lynch took over for Larry Merlo as CEO, and set about developing the company from a model focused on the pharmacy business, in-store clinics and a large insurance business (via Merlo's acquisition of Aetna) into one that in addition to those lines added tentacles such as a home healthcare business that would include actually employing physicians.

Also last year, Humana (HUM) took over home healthcare provider Kindred at Home. Then UnitedHealth Group (UNH) added LHC Group, also a home-based healthcare provider for more than $5B. Finally, and this may have been the catalyst, chief rival Walgreens Boot Alliance (WBA) in late August agreed to take on a majority stake in CareCentrix.

This more or less provoked CVS Health, who was in competition with the likes of UnitedHealth and Amazon (AMZN) , to pay $30.50 per share (or a rough $8B in cash) for Signify Health (SGFY) . The deal, which was finalized over the weekend is expected to close at some point during the first half of 2023. Signify brings with it about 10K contracted doctors and clinicians, as well managing roughly 170 accountable-care organizations.

These organizations try to balance saving money with reaching quality of care goals. Signify, according to the Wall Street Journal, has grown from serving approximately 300K homes five year ago to serving more than 2.5M homes at present.

Quoted in the Journal, Lynch said, "The house call is having what I'd characterize as a renaissance." From the company's press release, Lynch said... "Signify Health will play a critical role in advancing our health care services strategy and gives us a platform to accelerate our growth in value-based care.

CFO Shawn Guertin added... "We expect the acquisition to be meaningfully accretive to earnings and, as a result, are increasingly confident we can achieve our long-term adjusted EPS goals as outlined at our Investor Day in December 2021. The firm guided toward adjusted FY22 EPS guidance of $8.10 to $8.30 at that time. Currently, Wall Street is at $8.55 on that metric.

I do like CVS, I would not be long the shares if I did not. I like Karen Lynch and felt that she was the right person to follow Merlo, who had a big personality and was well-known to the financial media, but I wasn't always sure where he was going in his intentions.

That said, I am not that crazy about the balance sheet. As of the end of the June quarter, CVS had a net cash position of $14.993B, inventories of $17.375B, and current assets of $62.142B. Current liabilities totaled $68.457B (including $4.019B in long-term debt labeled as current), leaving the firm with a current ratio of 0.91. You know that I don't love that. Taking inventories into account, the firm runs with a quick ratio of 0.65. Not truly awful, but not pretty either.

Total assets add up to $230.279B including $106.695B in "goodwill" and other intangibles. That 46% of total assets, which is a bit much for me. Total liabilities less equity amounted to $154.773B, including $49.39B in long-term debt. Does this balance sheet pass muster? Not really, using my usual standards. I don't like that the long-term debt-load is more than three times the cash balance, and now more than half of that cash balance is committed to a new acquisition, which probably means more debt. 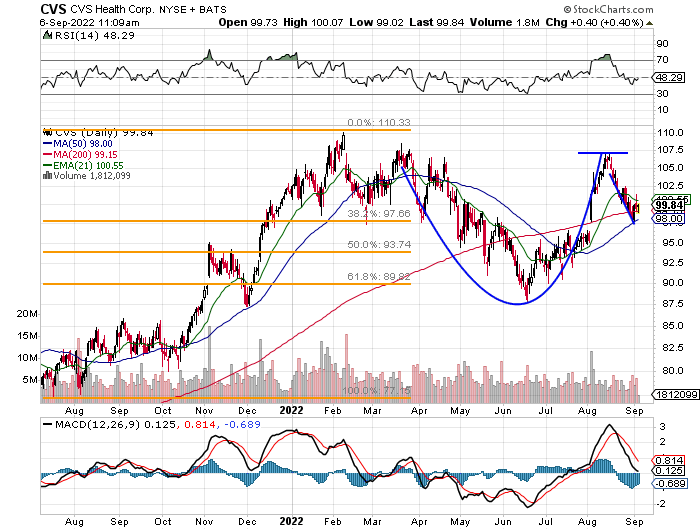 CVS trades at a rather low valuation, just eight times forward looking earnings. Probably for good reason. SGFY is not yet profitable, and CVS had to beat out two other deep-pocketed parties interested in the acquisition so it did not come cheap. The chart above was shaping up nicely. A nice, fairly neat Fibonacci retracement, a clearly developed cup with handle pattern with an identifiable pivot. Let's zoom in a little... 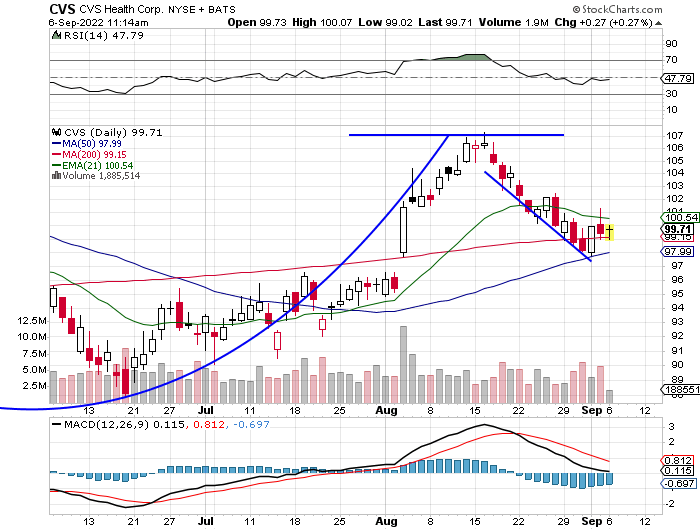 Therefore, I proceed, but not blindly. My panic point is now $97 and I look to exit on volatility. If the stock can take its 21 day EMA ($100.54) that could pull in the swing trading crowd. That will be my signal to take my exit. My target moves to $102.

Either way, I am out of here. The stock has served its purpose for me through a rough time in the markets, and I will have no patience moving forward with a large firm standing on a sloppy book, trying to digest an acquisition it needs to make, but can only questionably afford.

Get an email alert each time I write an article for Real Money. Click the "+Follow" next to my byline to this article.
TAGS: Mergers and Acquisitions | Investing | Stocks | Technical Analysis | Trading | Healthcare | Pharmaceuticals