What can one get for a buck and a half this morning. One could probably head for the local convenience store, and maybe purchase a small sized coffee. One could perhaps buy a quart of milk, but probably not. A gallon of gasoline? Not even close. You know, when I was a young lad, I used to go to Shea Stadium to see the Mets play when a day game was scheduled. I would call a pal, and we would hop on a New York City bus for 25 cents. A general admission ticket to the upper deck seats that were largely empty would cost $1.25 at that time. So, I guess if I was able to sneak in something to eat, and then drank from the water fountain... then I could go to Shea Stadium for $1.50 in the mid-1970's as long as my pal and I walked home after the game. No, one dollar and fifty cents will not buy a lot, especially in 2019. What it will buy you though, is an equity stake in department store chain J.C. Penney (JCP) this morning, and that's after a 20% earnings pop. Oh baby.

J.C. Penney released the firm's Q4 and full year 2018 financial results on Thursday morning. The firm beat Q4 EPS expectations by seven cents, 17 cents if GAAP standards are applied. Revenue contracted year over year to the tune of -8.5%, but this print did in fact exceed what Wall Street was looking for. There are some interesting nuggets within the press release. First off, the firm saw the cost of goods sold, excluding depreciation and amortization, come in at 68.7%, which was up from the same quarter in 2017's 66.5%. The firm however did not blame tariffs or other rising expenses. The firm flat out blamed planned markdowns, and pricing actions aimed at reducing inventory. I think this significant. I think this is part of the turning over of a new leaf, and an attempt to refocus the firm.

Even more telling of this new focus was the announced closing of 18 full-line stores in 2019 (15 new stores, 3 had already been announced), as well as 9 ancillary home and furnishings stores. These actions are meant to more balance the operation in terms of the allocation of resources between the worlds of e-commerce and the traditional brick and mortar presence. On those 18 stores, the firm assures that these stores are either minimally cash flow positive relative to their peers, or represent an attractive opportunity from a real estate monetization perspective.

So, bottom line... while I might be modestly impressed with the direction in which CEO Jill Soltau is going with this, what you want to know is if I am going to buy the shares, or really if you should buy the shares. Fair enough. Let's take a look.

Not great. You didn't think it was. Don't look at the Quick Ratio. Retailers always carry high levels of inventories and this is less telling here than it would be elsewhere. The Current Ratio is relatively healthier looking. Still, Cash and equivalents are lower than they were a year ago, but so are in a significant way Accounts Payable. Long-term debt remains the 800 pound gorilla in the room, but has not increased over the past 12 months. Most impressively, the firm did not try to use goodwill as an asset, meaning at least that they "get it." 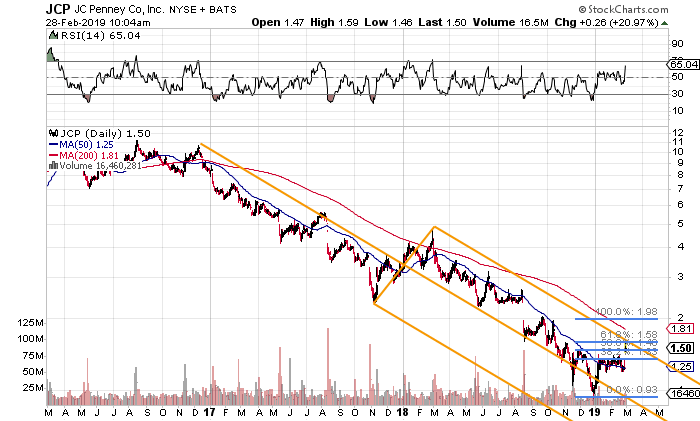 Down nearly 90% in a rough two and a half years. That's true. Has the name bottomed, and is it now basing? Maybe. What's the upside? On this morning move, the stock is threatening the upper trend line of our multi-year Pitchfork model. If that cracks, there should be Fibonacci resistance at $1.58, the 200 day Simple Moving Average at $1.81, and then the $2 level, the late 2018 highs to get through. That's a lot of wood to chop. The algos will be shooting against those levels.

JCP is not the worst idea that I have ever heard from a risk/reward standpoint. This will take time. I do not think any investor has to buy the name this morning. Every hitter in the line-up will get more than one at bat here. Maybe at $1.40. or $1.35 on the next dip. That, by the way will be a "set it and forget it" position. One that the trader doesn't look at for a long while.This Jill Soltau... just a hunch... she's there a rough five months. She's now making this her firm. She might just be the one who can do this. You just get your price, gang.