Ahead of Wednesday's market opening, Israeli provider of network security services CyberArk Software (CYBR) released the firm's first quarter financial performance. At the headline, the numbers were not that bad, but maybe less than we have become accustomed to. The stock, which had run up significantly just over the first few days of May, sold off significantly on Tuesday with broader equity markets, and then reacted poorly again on Wednesday morning.

For the period ending March 31st, the firm posted an adjusted EPS of $0.50. That was a serious beat, but also a contraction year over year. Revenue generation for the quarter landed at $106.8 million. This was a narrow beat, but at growth of 11.4%, a serious looking deceleration in sales growth both sequentially as well as annually.

While total revenue did show growth of 11.4%, Licence revenue, which had been that firm's largest driver, really kind of stagnated, growing from $51.3 million in Q1 2019 to just $51.7 million for the quarter just reported. The growth is in Maintenance and professional services, where last years' quarter produced $44.7 million in sales compared to this year's $55.2 million. Cash from operating activities came to $33.8 million, producing adjusted net income of $19.6 million. The firm's cash position ended the quarter in especially strong shape. Totaling cash, equivalents, marketable securities, and short-term deposits, the number grew to $1.2 billion from last year's $509.7 million for the comparable quarter.

The firm is already putting some of this capital to work, the announcement was made that CyberArk would acquire IDaptive Holdings for a cool $70 million. IDaptive is an "Identity as a service" provider that comes with the "zero-trust" approach that we have discussed in earlier pieces when discussing such names as Zscaler (ZS) , which has been an "on again, off again" Sarge fave. Currently long that name in full disclosure.

This is what really hurt the share price through the early morning hours. CyberArk pulled full year guidance due to the obvious economic uncertainties created around the ongoing coronavirus pandemic. The firm did however, venture out in the current quarter, and it's not pretty. The firm now sees Q2 revenue of $95 million to $105 million, below consensus view of between $105 million and $106 million. The firm now also sees operating income in a wide range spanning $7 million to $16 million, that could produce an EPS in between $0.17 and $0.35. The industry had been looking for $0.36.

On the firm's approach, CFO Josh Siegel said, "Given the weakened economic environment due to Covid-19, we expect customers to make more cautious purchasing decisions which will impact our revenue and cash flow from operations in the near term." The firm does still see Privileged Access Management as a priority for clients moving forward, as it always has. 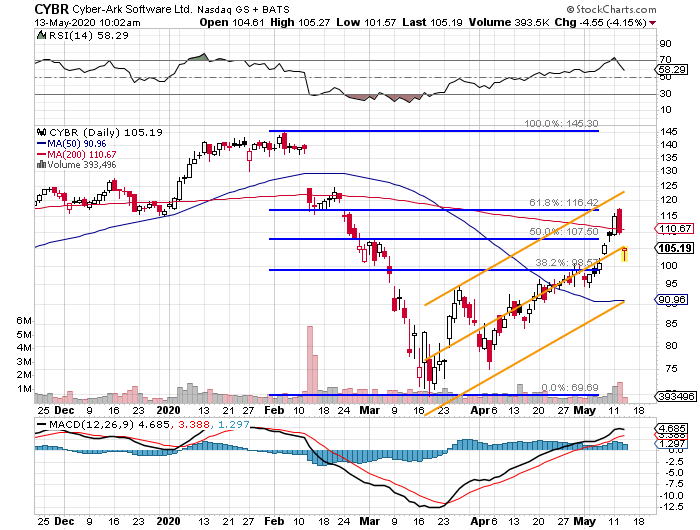 As I have already indicated, I am flat this name, and I prefer Zscaler for the growing need for cloud based security. That personal opinion aside, for those readers who are long this name, I do not see the stock as broken. The trend is very much intact. Sure there has been a 24 hour meltdown that appears to have been halted at the 61.8% Fibonacci retracement level of the February through March selloff.

That said, Relative Strength is not in poor shape, the daily MACD is perhaps elevated across all three components, but only threatens at this point. If a shareholder had taken a glance at this name last week, and then again this morning, that investor would not even think twice about the last sale. In fact, that investor might find comfort.

If this name were my cyber-security choice, or if I were still maintaining a portfolio as broad as the one I held prior to the public health crisis, I would not be afraid to hold on to this name. That said, I would need to see prices down around the 50 day SMA to even consider as add on weakness.

Get an email alert each time I write an article for Real Money. Click the "+Follow" next to my byline to this article.
TAGS: Earnings | Investing | Stocks | Technical Analysis | Trading | Cybersecurity | Software & Services | Technology | Coronavirus