Unless you've been living under a financial rock, by now you've heard that Larry Page and Sergey Brin are stepping down from their CEO roles at Alphabet (GOOGL) . Sundar Pichai, the current Google CEO, will step in as CEO of both Alphabet and Google. Page and Brin say this is about eliminating unnecessary management positions. The duplication of the roles is no longer seen as needed. While this makes for a great sound byte, many see it as the politically correct way of saying the pair are tired of dealing with the government. I tend to agree.

The pair will remain on the Board and as controlling shareholders, so it's not as if they will vanish completely. They even alluded about remaining in contact with Sundar on a consistent basis. I wouldn't anticipate any large changes in terms of the company's future nor their performance. The current path is already in place, so if we are going to see the influence, it will likely be in late 2020 or early 2021, and even then I don't believe it will be significant. Alphabet is truly a sum-of-the-parts organization in terms of structure, not in terms of fair valuation. It is companies within a company, not divisions of a single company. The result is more autonomy and stronger leadership within, hence the thinking the impact will be minimal.

If anything, I think the tiny $2.1 billion acquisition of Fitbit (FIT) may have more impact. The data collection from Fitbit should transform Verily into a powerhouse. Verifly is using technology to better understand health as well as detect and treat disease. Not only could Alphabet transform Fitbit into something to challenge the Apple (AAPL) Watch, but Verily could become a cash cow of health data. Additionally, that data could feed into Calico, the Alphabet research and development biotech company. 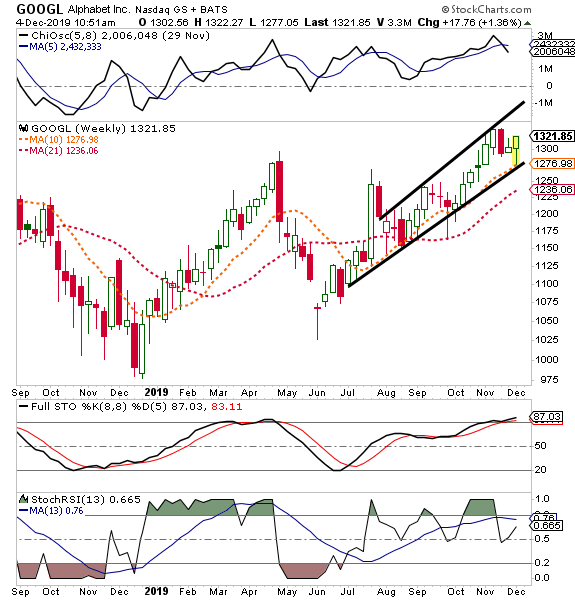 The weekly chart pattern reflects what we've seen in many other large-cap names. There is a strong bullish channel with clear support and resistance. Alphabet has already tested support this week, which happens to coincide with the 10-week simple moving average (SMA). Secondary, support sits at the 21-week SMA. Those levels are roughly $1275 and $1236, respectively. Upside resistance sits at last month's $1134 high. The high end of the channel projects to $1375.

Nothing from the announcement has me thinking short. In fact, I'd use any weakness to consider a long side trade on the name. Nothing from today will be transformative or impactful on the shares over the next six months plus, so from a trading perspective, this makes for great headlines as well as an opportunity for analysts to discuss their views, but does little for us in the near term unless there is an opportunistic overreaction selloff, but it does not appear as though that will be the case.

(Alphabet and Apple are holdings in Jim Cramer's Action Alerts PLUS member club. Want to be alerted before Jim Cramer buys or sells GOOGL or AAPL? Learn more now.)

Get an email alert each time I write an article for Real Money. Click the "+Follow" next to my byline to this article.
TAGS: Investing | Stocks | Technical Analysis | Trading | Advertising | Stock of the Day