Fourth-quarter earnings strike again on Alphabet (GOOGL) . This will make year number five in a row that the company will finish red after reporting its Q4 numbers. Fortunately, the idea of a short iron condor played out well for those who pursued the idea. As the stock fought off the early morning dip, the $10 net credit has faded to under $3. As I tweeted earlier, and I'll say now, I wouldn't wait around until the end of the week. Selling something for $10 and being able to buy back at $3, or even $5, is an attractive overnight take home. The total risk was $20, so measuring against the maximum loss still results in solid returns. Admittedly, the overall strength of the market may have bailed this one out, but I believe $1400 would've held.

What we have to decide now is whether we have a sell-the-news reaction in shares today or actual disappointment and concern. Investors finally had the chance to look behind the curtain and get a glimpse of YouTube as well as Google Cloud. Despite this being the first reveal, the consensus for both YouTube and Google Cloud, especially Google Cloud, was mild disappointment. YouTube grew 36% to $15 billion for the year with $4.7 billion coming in Q4, but whisper numbers went as high as $25 billion. When you consider Netflix (NFLX) sits in the $20 billion range and that's all they do, the YouTube numbers aren't bad. Using the same price-to-sales metrics, the value of YouTube sits north of $100 billion alone. Given that I think it can be managed with a lower expense figure, even with less sales, it may be more valuable than Netflix.

Google Cloud produced $8.9 billion with a $10 billion run rate on growth of 53%. Comparisons to Amazon (AMZN) and Microsoft (MSFT) immediately hit the table. Azure flashed a higher growth rate at 62%, but also enjoys the advantages of some sell-through. Breaking down Google Cloud as a standalone puts it in the $150 billion to $200 billion valuation level as well.

Already, we're at 25% to 30% of the company's current value without talking about the nearly $38 billion in ad sales, which was up 16.7% year-over-year. Hardware did disappoint, but without a new product launch like Pixel 3 combined with the impact of China, it's not because of a lack in execution from the company. And we haven't even talked about the potential of gaming and eSports. 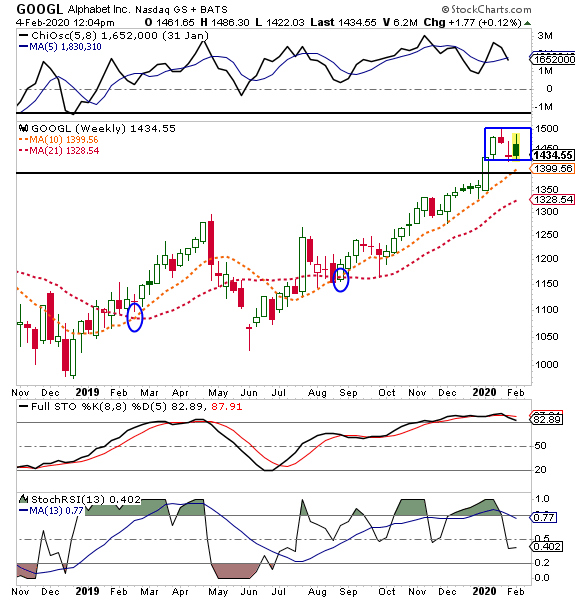 I don't hate this report. In the same breath, I don't love the current technical picture. We're trapped in a consolidation box after the run higher. Shares tested the lower end of the range this week. Holding above $1420 would be a positive development. A successful test of $1400, without violating the level, may ultimately be what bulls needs. Bears absolutely have to keep the stock under $1500. That will be a key breakout level. I could see a small buy here with a second buy around $1400 and a stop around $1330, but I'd prefer to see what happens over another week or two. A close above $1500 should draw in momentum traders, but with the Full Stochastics, StochRSI, and Chaikan Oscillator all turning lower, short-term caution is the name of the technical game. On the fundamental side, I see more positives in the report than negatives, so I would consider using technical support levels for entry on fundamental bullishness.

(Alphabet, Amazon and Microsoft are holdings in Jim Cramer's Action Alerts PLUS member club. Want to be alerted before Jim Cramer buys or sells these stocks? Learn more now.)

Get an email alert each time I write an article for Real Money. Click the "+Follow" next to my byline to this article.
TAGS: Earnings | Investing | Options | Stocks | Technical Analysis | Trading | Technology | Advertising | Stock of the Day