Legacy data-base software giant Oracle (ORCL) reported the fiscal fourth quarter performance on Tuesday evening, and closed out a good year with a good quarter. Oracle posted GAAP EPS of $1.37, or non-GAAP EPS of $1.54, after adjusting mostly for stock based compensation. This simply crushed Wall Street's expectations, which were for about $1.05. Revenue generation clocked in at $11.23 billion, up 7.6% year over year, and also beating the Wall Street.

Gen2 Cloud (Cloud infrastructure), plus Autonomous Database which must fall into that first category, was reported to have experienced revenue growth of more than 100% for the quarter, admittedly without a lot of clarity as to the actual dollar number, how much more than 100%, or how much revenue was generated by either the Gen2 Cloud or the Autonomous Database. This lack of clarity is at least in part, along with rising expenses as you'll see, for the stock's overnight selloff.

Why this would have been important is that this is where Oracle competes directly against Amazon's (AMZN) AWS, Microsoft's (MSFT) Azure, and Alphabet's (GOOGL) Google Cloud. Firm wide, adjusted operating income increased 6% to $5.4 billion on adjusted operating margin of 49%.

Total current assets closed the year at $55.5 billion, up from $52.1 billion, as the firm turned a significant decrease in the cash position into marketable securities. Non-current assets increased notably on a threefold increase in deferred tax assets. The entry for Goodwill remained steady over the year, which we like to see. Current assets overwhelm current liabilities which themselves are dominated by Notes Payable and Deferred revenues. Notes Payable also comprise most of the entire sheet for non-current liabilities, but the ratios are all fine. The balance sheet is okay.

On Tuesday night, CEO Safra Catz explained that the firm, though very happy with the quarter, was going to ramp up investment in the business in order to accelerate revenue growth. Catz sees revenue growth for FY 2022 growing at a faster pace than in 2021. Despite this, Catz after outlining the firm's plan for capital expenditures, guided adjusted EPS for the current quarter (Q1 2022) down to $0.93 to $0.98, which is well below the $1.03 Wall Street consensus. In fact, of the 19 analysts that cover the stock, the lowest projection across the range of distribution was for $0.98, so this is a kick in the pants.

Of these analysts, I found 12 rated at five stars (at TipRanks) who have opined on ORCL since the earnings hit the tape last night. Of those 12, there are now nine rating the stock at a "hold" or their firm's equivalent with an average price of $79. Note that two analysts of that nine did not offer a target price. Three analysts are sticking to "buy" ratings of the equivalent. Those three now run with an average target price of $85. The stock is now trading with a $77 handle -5.6% for the day, so nobody involved here sees any hidden home runs in Oracle's near-term future. The high target was $93 (Brian White at Monness), and the low was $65 (Brad Reback at Stifel Nicolaus). 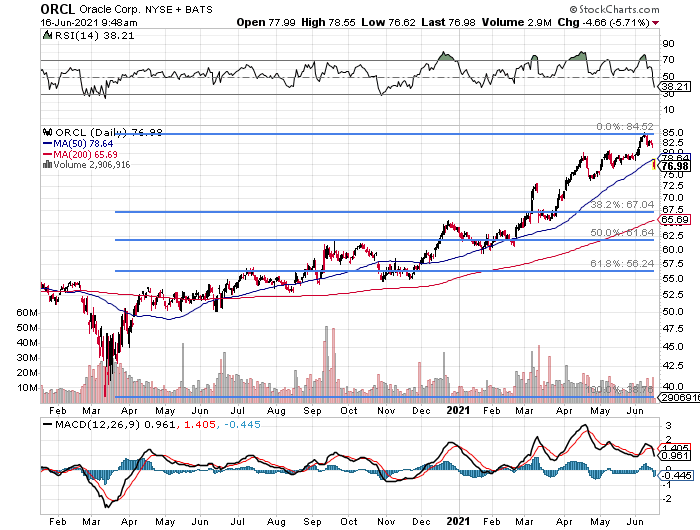 ORCL has had a heck of a year and a half. A 38.2% Fibonacci retracement of the entire pandemic era rally would put the first line of support at the $67 level, which is just above the stock's 200 day SMA at $65 (which happens to be Reback's target). On the bright side, though the stock is technically weak right now, there is a gap left to fill by this morning's open. The only bad thing about knowing that most gaps do eventually fill is that there is no timetable for this. It happens when it happens.

As you probably guessed, I don't love the stock. I was about to write up a couple of ideas involving the sale of $65 puts with different expirations. Then I noticed, not exactly heavy volume, but heavier volume than you might expect for the $57.50 September 17th puts. I don't know if whoever that is knows anything, but it certainly dampens my appetite for equity risk at the $65 level. I think I just take a walk and whistle on by ORCL without getting involved. There are better ways to play the cloud.