Where is the stock of Biogen (BIIB) a buy? Not here apparently, if you are the Samsung Group (SSNLF) . These shares have fallen a long way.

The stock roared. Biogen had closed at $385.95, up 38.3% for the day, but still well off (17.6%) of the day's high of $468.55. June 7th was the day that the U.S. Food and Drug Administration approved Biogen's monoclonal antibody "Aduhelm" for the treatment of early stage Alzheimer's disease. Aduhelm was the first new therapeutic approved for this awful neurodegenerative disorder in almost 20 years.

The drug works by removing sticky deposits of a protein called amyloid beta from the brains of patients in earlier stages of Alzheimer's in order to stave off negative impacts such as memory loss and the ability to care for oneself. The approval was not without controversy. The FDA even said on its own website at the time that the results of the underlying clinical testing were mixed, but that Aduhelm "was shown to reduce amyloid beta plaques in the brain" which is thought to be beneficial.

On December 20th, Biogen announced what would be a nearly 50% price reduction for this new treatment. With this price reduction at the wholesale acquisition level, the annual cost at the maintenance dose for an average weight person would be "reduced" to $28,200. Biogen expects to add a rough 50K new patients in 2022. The move was met with a mixed reaction on Wall Street, applauded by some, but accompanied by multiple reductions made to existing price targets.

The next shoe to drop came from a committee of the Japanese Health Ministry that cited inconsistent results taken from late stage global studies as a reason for hesitancy. Japan has not, to this point, decided to approve Aduhelm. This leaves for Biogen an estimated total of $325M in Japanese sales by 2025 on the table, but could also spell trouble for the therapeutic with other regulators.

Biogen shares were soaring once again on Wednesday, up 9.46% for the day closing at $258.31, and retaking the stock's 50 day SMA ($251) for the first time since September 1st. The news? According to a report in "The Korea Economic Daily", U.S.-based Biogen was in talks to sell the firm to the Samsung Group in a deal potentially valued at a rough $42B. (Biogen closed on Wednesday at a market cap of $37.9B.) This would be the largest acquisition for Samsung in quite some time, the last large deal being the $8B purchase of electronics maker Harmon in 2016.

Not so fast, my friends. Late Wednesday night, Bloomberg News reports that Samsung is claiming that the report in The Korea Economic Daily was not true. Not true that the two sides were headed for a deal? Or, is it not true that the two sides talked about it? Not a lot of detail available here. BIIB traded off 6% to 7% in pre-opening U.S. trade. I see the shares trading while I write, with a $241 handle.

Biogen is not done working on Alzheimer's Disease. Biogen and Eisai (ESALY) are working to advance BAN2401 (lecanemab) toward phase 3 testing after the results of a phase 2 trial showed a dose-dependent reduction in amyloid plaques in the brain, as well as a slowing of cognitive decline. The FDA has awarded BAN2401 a "fast-track" designation.

The name reports in about a month. Wall Street in general is looking for EPS of $3.33 on revenue of $2.62B. If precise, these results would be good for earnings "growth" of -27% on sales "growth" of -8%. This would be a fifth consecutive quarter of negative year over year growth on both the top and bottom lines.

The stock is not expensive, trading at 19 times forward looking earnings and three times sales. That said, it should not be, you are not paying for growth. Long-term debt is kind of high, but manageable in the context of a balance sheet that is strong overall. There is enough cash on hand. Assets easily outweigh liabilities both current and in total. The current ratio paints the picture of a firm that can without hesitation pay its bills.

My thinking is that Biogen will certainly pop if this new Alzheimer's drug shows more promise in late stage clinical trials. Some might say that where there is smoke there might be fire. Maybe Biogen is a seller, and maybe there is a buyer, whether that buyer is Samsung or not. 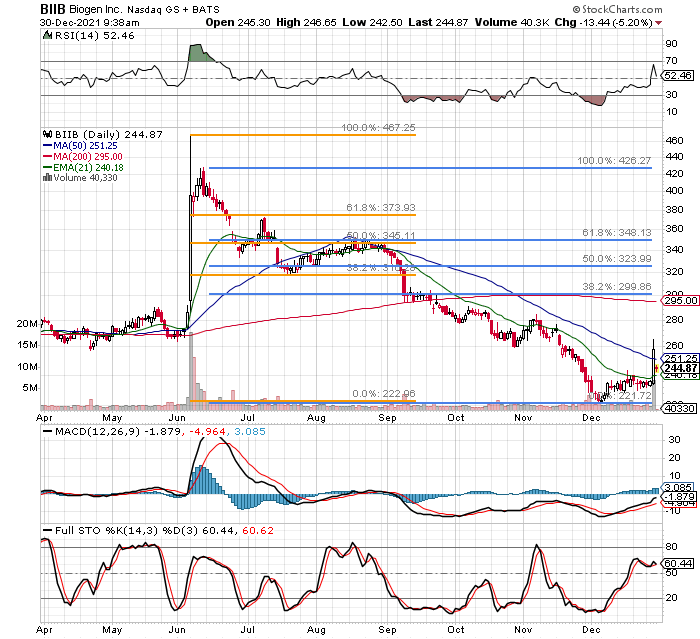 I think participants can get long, a small to medium sized position for a trade. I am not saying get married to the stock, I am saying that the idea could be a trade based on two possible catalysts. A 38.2% retracement off of the top of that June 7th pop would mean that the shares would have to run all the way to $315. That was kind of a false top though. The high of $426 a few days later is in my opinion a more realistic top, and allows for a more realistic 38.2% Fibonacci retracement level at $299. This is also very close to the 200 day SMA at $296.

Bottom line? For me? I may grab a few shares here, as Biogen's more than the two catalysts mentioned has likely suffered from early December tax loss harvesting, and some of these sellers who waited the 30 days will be trying to get back in next week. Being I do not love the stock, and I am not in the name yet (I still have to buy this dip after this piece publishes), I will likely have an itchy trigger finger should that pop materialize in early January. I won't need a target price. I give this trade two weeks.

Get an email alert each time I write an article for Real Money. Click the "+Follow" next to my byline to this article.
TAGS: Mergers and Acquisitions | Drug Approvals | Investing | Stocks | Technical Analysis | Trading | Pharmaceuticals