It all started weeks ago - it really started when Peloton (PTON) stock peaked more than a year ago - when activist investor Blackwell Capital LLC called for Peloton to fire CEO John Foley and consider selling the company. This brought on speculation of who would be a good fit and why. A handful of blue chip names hit the rumor mill, such as Amazon (AMZN) , Apple (AAPL) , Nike (NKE) , and even the Walt Disney Company (DIS) . Of course, that came after CNBC reported news that Peloton had made the decision to temporarily halt production of its connected fitness products due to a slowdown in demand.

The firm rushed its fiscal second quarter earnings release up to this (Tuesday) morning from its scheduled afternoon release so that the firm could hold one press conference to discuss the events of the past several hours. First, the news. Peloton announced early on Tuesday morning that CEO and co-founder John Foley would step down from his position as chief executive and become executive chair. President William Lynch will also be resigning his executive position, but will remain on the board. Barry McCarthy, former CFO of both Spotify (SPOT) , and Netflix (NFLX) will succeed the both of them, and assume the roles of CEO and president. McCarthy will also be joining the company's board.

In addition, the firm also announced that it expects to cut roughly $800M in annual costs this year while reducing capital expenditures by $150M. Peloton will also eliminate approximately 2,800 jobs, or about 20% of the firm.

Peloton posted a net loss of $439.4M, or a loss $1.39 per share. Wall Street had been around a loss of $1.20 per share on this metric. Revenue for the three month period ending December 31st landed at $1.1339B, which was good for year over year growth of 6%, but did not meet consensus view. Connected Fitness Subscriptions grew 66% to 2.77M, and paid digital subscriptions grew 38% to 862K. Connected Fitness Subscription Workouts increased 26% to 123.2M. However, monthly workouts per subscription dropped to 15.5 from 21.1 a year ago. FQ2 average net monthly Connected Fitness churn was 0.79%. The retention rate over 12 months was 92%.

No way to sugarcoat the revised full year guidance.

Well, if you read me often you know that I consider Peloton products grossly overpriced for what they are. There is a lot of competition in the space, and even if one could afford the equipment and the subscription, why would you, knowing that similar and more demanding workouts (if that's your thing, it is mine) are available for a fraction of the cost.

I think the graph provided in this morning's press release is very telling. Don't know if I am allowed to copy and paste it, probably not. It's the graph where I got the 15.5 average workouts a month from. It's more than that. It's three successive quarters of declines. To me, that reinforces the concept that this stock was a pandemic darling and as people inclined to exercise feel better about working out either outdoors or in a gym, they will. Hence, the difference here is one of demand pulled forward versus demand broadened. In my opinion, this is a case of demand pulled forward, and to top it off, many folks are probably trying to preserve whatever savings they have amassed throughout the easy fiscal policies of the pandemic era, as there will not likely be new fruit born of that tree.

Lastly, though the firm talks about positioning for sustainable growth and establishing a path toward profitability. These moves have the smell - I could be wrong, this is just an opinion - of a company preparing itself to look more attractive to potential buyers. The list of potential dance partners, above, is a high quality list. The better the firm looks, the better the chance of getting two or more of those firms, or others, interested. Seriously interested.

... Nobody places a serious bid for PTON, the balance sheet is in better (not as bad) shape than you probably think it is. The actual cash is notably higher than it was six months ago. The net cash position is only up small. Current assets are up more than $600M over that time, which is good. The growth is all in inventories, which could be bad. Total assets are higher as well. It does not look like the entry for "Goodwill" has been abused. Current liabilities are primarily comprised of accounts payable. Total assets are considerably larger than total liabilities less equity, even allowing for the remote possibility that the entire inventory could be worthless, which is not the case. The firm's quick ratio (a tougher metric than is a current ratio) at least by my math, is above the 1.0 mark, which is what I find to be the minimum in order to breath a little easier. 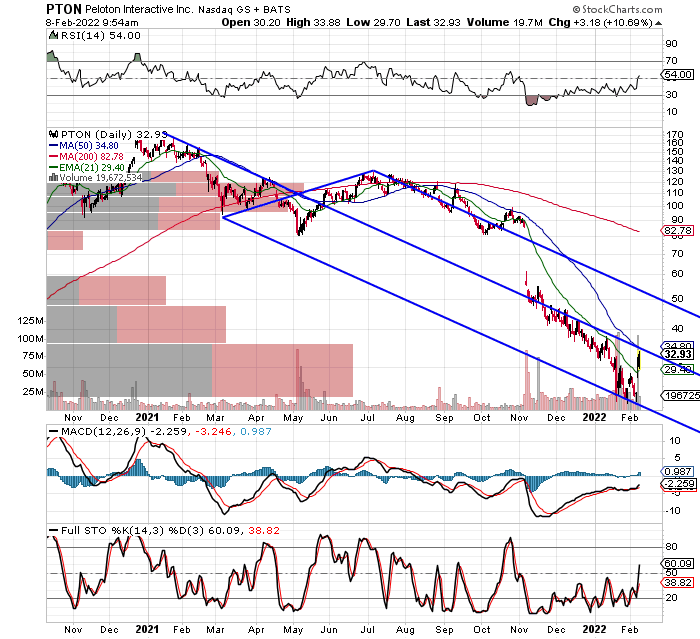 Readers will not find this as awful as the stock has been, the shares traded neatly within the lower chamber of our Pitchfork model. The trading volume at the bottom of the chart has been enormous and does suggest a potential bottom. No promises. Forget about that unfiled gap in the $60's for now. Put it out of mind.

I am flat the shares, but did have the urge to buy some in the pre-opening in the high $20's. I knew by that time that PTON was on the short list for a Real Money piece so I had to forego the opportunity. I did however get long the PTON $33 calls expiring this Friday, and short the PTON $37 calls also expiring this Friday (Net debit: $1), yesterday as I had a hunch that something was coming. I thought it would be a bid from another company, but this works for now. This options strategy is known as a bull call spread.

Do I think somebody is going to buy this company? Yes, I do.

(AMZN, AAPL, and DIS are holdings in the Action Alerts PLUS member club. Want to be alerted before AAP buys or sells these stocks? Learn more now.)

Get an email alert each time I write an article for Real Money. Click the "+Follow" next to my byline to this article.
TAGS: Mergers and Acquisitions | Earnings | Investing | Stocks | Technical Analysis | Trading | Consumer Products | Consumer Discretionary