That's right. I took a look at the top 10 trending stocks at my sometimes inaccurate tool that measures these things and it showed Alcoa Corp. (AA) trending in the "number one" position. Again, that's right. With Costco (COST) set to report monthly same store sales. With Biogen (BIIB) surging, and with Bed Bath & Beyond (BBBY) set to go to the tape with quarterly performance after the close, this is what my trending tool came up with. Maybe it's wrong. Maybe I'm crazy. If the economy were to somehow remain on an unskewed upward trajectory, or if there is to be an infrastructure rebuild worked into either the next phase fiscal package (or the one after that), then there will be a need for the kinds of old economy firms that can provide industrial type commodities. I am already long Freeport McMoran (FCX) for that reason.

Alcoa released preliminary second quarter earnings early on Wednesday morning. The firm reports for real next week. Adjusted EPS is now being guided toward a range spanning from breakeven to $-0.08. Consensus is down around $-0.55. Revenue for the quarter is now expected to print in between $2.1 billion and $2.17 billion. This would be down from $2.71 billion one year ago, but above the $2.09 billion that Wall Street had been looking for. Alcoa is also guiding production higher across several metrics. The firm is looking for a 5% quarterly increase in mining operations, 2% rise in refining, and a 3% increase in primary aluminum production. The firm also expects to end the quarter with a cash balance of $950 million, up from $829 million three months ago.

Why the early numbers? Why the guidance? That news also made the rounds this morning. Alcoa announced a proposed offering of senior notes by a wholly owned subsidiary of the firm, Alcoa Nederland Holding. The issuer intends to use the net proceeds created by this offering for general corporate purposes to include adding to the net cash position on the balance sheet. There's more. 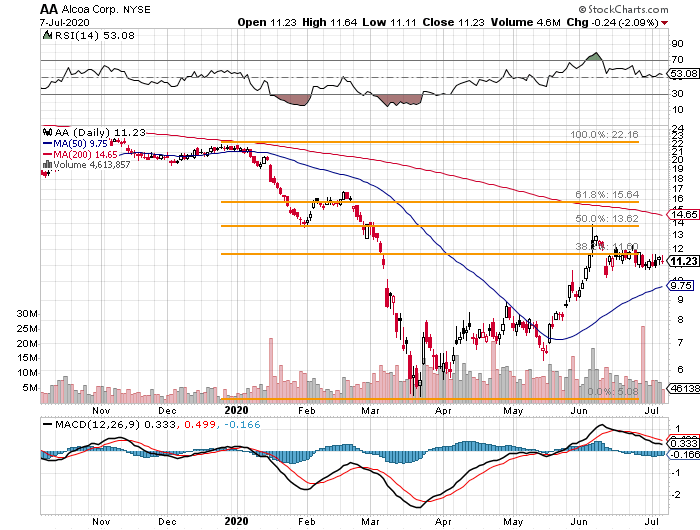 As readers can see, shares of Alcoa are still having an awful year, and that possibly for the better part of the past month, investors have either sniffed out improved underlying conditions, or this attempt to raise cash. Maybe both. Now, the economic rebound would certainly have to be considered suspect as a number of states are either rolling back stages of their own reopenings or regulating intrastate travel due to a pandemic that just won't quit.

Let's not forget that China remains an issue for Alcoa. Not just reduced demand from within, or from the Asia-Pacific region, but as a producer/supplier. That product will end up somewhere, which will suppress aluminum pricing globally.

My thought would be that Alcoa would be ripe for a small short close to the early June high. Short of that level, a bearish investor might be interested in getting long a bear put spread expiring at the end of next week based on pricing.

(Costco is a holding in Jim Cramer's Action Alerts PLUS member club. Want to be alerted before Jim Cramer buys or sells COST? Learn more now.

Get an email alert each time I write an article for Real Money. Click the "+Follow" next to my byline to this article.
TAGS: Economy | Investing | Markets | Stocks | Technical Analysis | Trading | Metals & Mining | Industrials | China